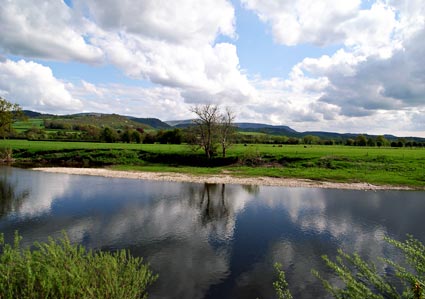 A photo diary from a weekend in Hay on Wye.

Thursday:
Travelled up to the lovely border town of Hay on Wye, staying in a fantastic old higgledly-piggedly house in the hills.

Thanks to Dr Beeching and his railway axe in the 1960s, the journey took ages: train from Paddington to Hereford and then a one hour coach trip to Hay, with a bus driver from Barry at the wheel.

We took a stroll around the picturesque streets of Hay, and checked out the half-ruined castle. 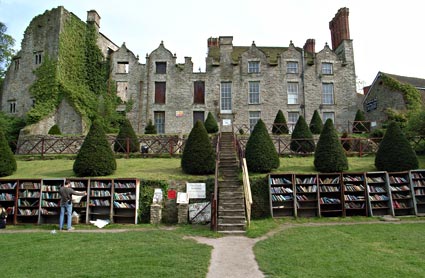 The town is famous for its bookstores and there were plenty to be found (apparently there’s one bookstore for every 30 residents!).

Later this month, Hay plays host to the internationally famous Book Festival, where the town’s population swells from 1,500 to 150,000!

Popped into a deserted Rose and Crown for pint of Merrie England before moving on to the far livelier – and very friendly – Wine Vaults where everyone seemed to be dropping their pints with gusto.

Maybe it was a curious Welsh custom. Or maybe it’s because everyone was absolutely hammered.

Come the end of the night it was pissing down, but some kind local gave us a lift the mile home to our lovely B&B.;

Friday
After an enormous fried breakfast, we headed out into the glorious sunshine.

After walking into Hay, we headed north along the banks of the wide and fast-flowing River Wye. 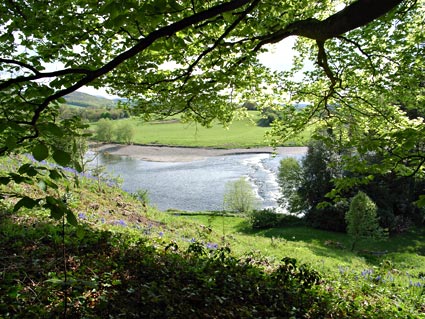 A nifty bit of map reading took us along the overgrown embankment of the former Hay railway before arriving at the Old toll bridge at Whitney.

Had a chat with the flute-playing man working the toll gate who pointed out a huge two foot trout resting at the base of the bridge.

Had a quick paddle in the Wye before walking past Rhydspace to pick up the Offa’s Dyke walk.

Back in Hay, we stopped off for tea, sandwiches and ice cream at Shepherd’s as a well-earned reward for our eleven mile walk.

Then walked the mile or so back to our guest house in Lower Cusop, grabbed a quick nap and then back into town via the Offa’s Dyke path which runs right behind the house.

Grabbed a couple of pints of ale of Wye Valley Ale at the Kilvert and then on to the local laaaad’s hotspot, the Wheatsheaf (aka 38@).

Left early as I felt a bit rough – and things got a lot worse as I spent most of the night being sick and feverish. 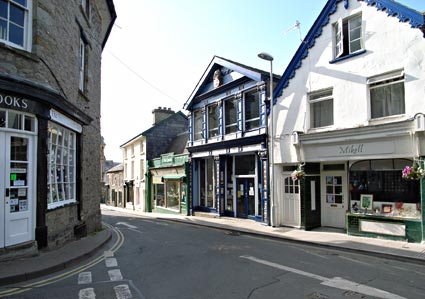 Saturday
After a spectacularly awful night, stayed in bed till 1pm but felt well enough to stumble into town to meet Em.

Checked out some bookstores and had tea and cakes at the Granary Cafe (my stomach felt well enough to risk a carrot cake).

Walked back for a lie down and then back into the throbbing metropolis of Hay to grab a half in the Blue Boar and another in the Wine Vaults (now our fave bar in town).

Still not feeling 100%, so home early to watch the brilliant Green Wing.

Sunday
Woohoo! Feeling grand and the sun’s out.

Walked into Hay, grabbed a big Shepherd’s ice cream and then picked up the Wye Valley Walk, heading west.

Things were going splendidly until I got a text message, “Problem with the bulletin boards: please call.”

This turned out to be something of an understatement.

I’ll keep the full story for another day, but it involved me shouting and screaming into my phone while a field of sheep looked on, baffled…

Then walked along a B road before walking along a strip of the old Brecon – Hay railway like which has been turned into a small nature reserve, Glasbury Cutting.

Walking into Glasbury we stopped off at the River Cafe for a coffee before crossing the Wye and heading east back towards Hay along the footpath. 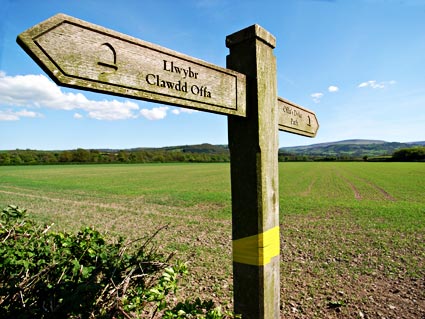 Managed to discover how powerful the electric fences for cattle are after I inadvertently leaned right into one to take a picture.

Net result: a sharp, tingling burst on my thigh and a blurry pic.

Took a late lunch in the delightful church graveyard at Llowes and had a wander about inside the ancient church (heavily restored by Victorians) which houses the 1,300 year old stone cross of St Meilig.

Suitably fortified by our local organic bread, cheese, crisps and apples, we strode into the fading sunshine, arriving back in Hay feeling surprisingly dapper after our 12 mile walk.

Back home for a bath and out again to hit Hay’s beyond mellow Sunday nightlife.

A late summer stroll along the splendid beaches of Tenby, west Wales