Saturday started early with a mad dash into town to grab a quick coffee and a cake at the Photographer’s Gallery before hurtling around Tottenham Court Road with Em who was looking to buy a new laptop. Electronics fatigue soon set in, so she left clutching a handful of leaflets instead.

Then it was a train dahn sarf to The Ship boozer by Norwood Junction to meet up with the 1927 lads before watching the mighty Cardiff City play at Crystal Palace.

The game was alright, but what the fuck was all that bollocks going on at half time?

Some ludicrous “kick a ball into a shed to win a kitchen” competition (what?!) and a bunch of the lamest, US-wannabe cheerleaders doing the worst dancing I’ve ever seen.

Hello? This is the UK, not some fucking awful American football bullshit.

And they even did that really, really pathetic “let’s play a burst of music when we score” shite. Awful.

But I liked the ground. I liked the fact that we didn’t get hassled for standing up (once again, the entire Cardiff City crowd stood for the whole game) and the view was good too.

The game was tight. We had what appeared to be a perfectly good goal disallowed and Palace had a player sent off in mysterious circumstances.

Wasn’t too impressed with the Palace part-time singing though. But it was still better than the Highbury Library.

A cunning combination of trains quickly got us to the 1927 club’s 15th anniversary bash at the The Grouse & Claret in upmarket Belgravia (we soon lowered the tone) where many beers were sunk and I won a signed Cardiff City football in the lotto! Woohoo!

The evening wrapped up in the trusty Albert. 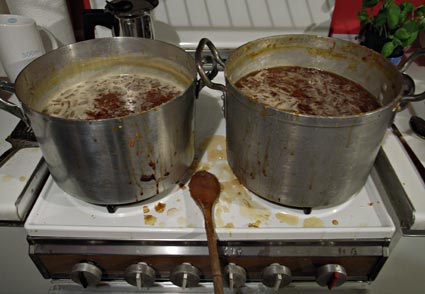 The next day, the sound of mass scraping, shredding and pan bashing told me that the urban75 craft club were in town, brewing up some delicious home made marmalade downstairs.

The weekend over, I’ve got to start sorting out the next few Offline nights, one this Friday at Birkbeck University and then a new night at the Brixton JAMM on the 23rd. Stay tuned!

The football season kicks off!

Football: cut out the “industrial language”