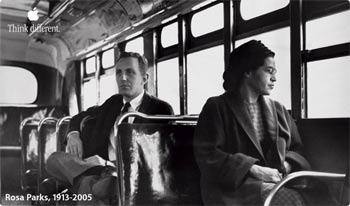 Some fuckwit at Apple thought it would be a grrrreat idea to “associate” the “values” of the multi-billion company with Rosa Parks, who died recently.

Parks was a brave US civil rights activist who protested against segregation in the fifties by famously refusing to give up her seat to a white man, despite being ordered to do so by the bus driver.

Her arrest was to spark a bus boycott which helped make other Americans aware of the civil rights struggle, with her case ending in a United States Supreme Court’s ruling that segregated bus service was unconstitutional.

The case proved to be a landmark because the ruling applying to all segregationist laws, not just those affecting interstate/intercity commerce.

So what, you may ask, has her struggle and achievements got to do with Apple?

Well, the answer is, of course, absolutely fuck all, so I’m well pissed off to see that they’ve branded her image on their homepage, branding her photo with the Apple logo and corporate message, “Think Different”.

Maybe this will be their next front page? 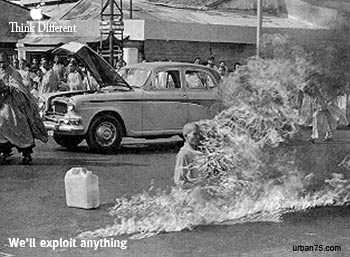