Awash with beer
It looks like I’m doing my bit to keep the UK at the top of the World Festive Boozer’s list, with a week-long binge that shows no sign of abating.

On Thursday, I was quaffing wildly at my club, Offline after the night turned out to be a good ‘un. Friday was a long night at the Albert followed by the Dogstar.

Saturday was the Actionettes at the Water Rats, Kings Cross, and Sunday was an afternoon ‘Christmas Tea’ at my flat (for ‘tea’ read ‘booze’) followed by a night at the Albert watching local band, The Messengers of God’. And then the Dogstar.

Monday, I was determined to have a night in, but an email from IanW offering a free ticket for The Pogues at the Academy soon put paid to that idea. And seeing as it was the Pogues, it just wouldn’t be right to remain sober. 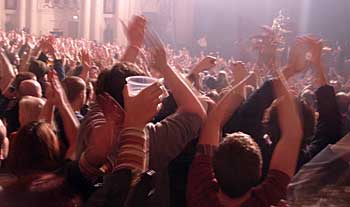 And what a fine show it was! The Academy was rammed and despite Shane McGowan’s appearance to the contrary, he was in fine voice all night.

And only the most hard-nosed grouch could fail to be moved by their show-stopping rendition of “Fairytale of New York”. Fabulous gig.

A very drunken night in the Brixton Dogstar. Oh dear!

A Thursday night in Brixton: indie and industrial