I can’t say I really enjoyed myself until the night was nearly over (way too much stress!), but our first Offline club night at the Dogstar was a raging success!

Normally, there’s only about 30 people to be found in the pub on a Thursday night, but we managed to ram the place – both upstairs and downstairs – with a great, up-for-it crowd. 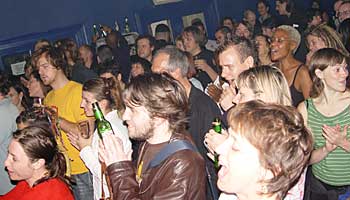 upstairs cabaret room at the Dogstar

I spent most of the night in the Coldharbour Cabaret Rooms upstairs putting on a great bill which included Vic’s Cabaret Corner, Helen McCookeryBook the fabulous Actionettes, the awesome Jack Blackburn and a host of poets/ranters.

It was the first time that the upstairs room at the Dogstar has been opened for years and it was good to see the place coming to life again. 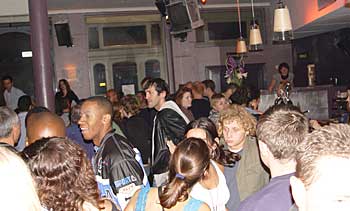 downstairs dance floor at the Dogstar

Downstairs, an excellent DJ line-up kept the floor moving, although I managed to miss the first four sets – but by 1am I was making up for my hard work with a veritable lager frenzy (although the lager drinking may have been a little more frenzied had the Dogstar not woefully under-estimated the expected crowd and run out of beer glasses by midnight!)

By 2.30am I was wobbling about upstairs trying to unravel the long fairy-light cables we’d decorated the place with before heading home very, very drunk and very, very happy!

A big ‘word up!’ to all the performers who gave their time for free, a big thanks to Offshore for sorting out the DJs and cheers to all those who came along to support this new event!

Offline club at the Dogstar

A very drunken night in the Brixton Dogstar. Oh dear!