A wedding in Nottingham

Saturday morning saw us speeding north towards Nottingham for another marriage ceremony – they seem to be coming in thick and fast this year!

The last time I’d visited Nottingham was back in the 1990s when I played a gig with indie/goth/dance outfit Melt at the Rock City venue.

I loved the venue, but the city presented an uninviting vista on a summer’s Saturday night, with loud drunks, ruffians and hotheads roaming the streets, and every bar and cafe seemingly sporting a chisel faced bouncer. 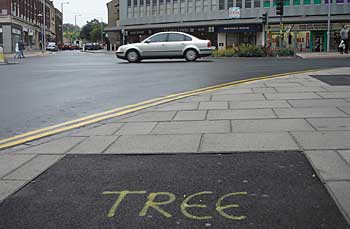 Returning a decade later, the signs weren’t too good: the city centre’s shopfronts had turned into a sea of bland, anytown multi-chains with corporate logos grinding down any spark of individuality.

A walk through a dreadful, soulless, shopping centre dampened already-deflated spirits further, with the dull roar of air conditioning adding to the misery – whatever happened to fresh air?!

Why do people put up with this kind of anonymous, depressing architecture? The people responsible for this dreary planning should be made to live in it. 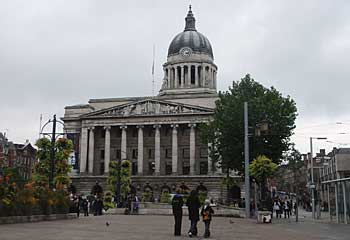 The wedding took place in the imposing Council House, once the largest stone building built in Britain since the first world war.

Opened by the Prince of Wales in May 1929, the building is dominated by a great central dome, rising some 200 feet above ground level.

The tower contains “Little John” a two and a half ton striking bell reputed to be the deepest toned bell in the country. 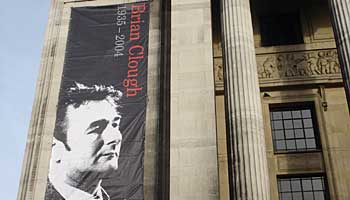 A large banner was draped over the Council House with a book of condolences inside in memory of the late, great Brian Clough. I left a short note.

We’ll never see his like again and football’s the worse for that fact. 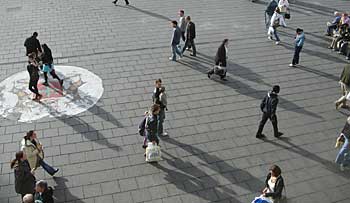 The wedding took place inside a grand hall on the first floor (above is a view from the balcony), and happily, the ceremony was so touching that it managed to melt even the meanest hearts.

The young couple were hopelessly in love with each other and the well attended ceremony was beautifully judged – even if they did make me mumble along to Reg Presley’s dire “Love is all Around”.

The wedding party moved on to the attractive confines of the (ahem) ‘castle’ grounds where I formed a far more pleasing impression of Nottingham.

I didn’t feel like I knew the couple well enough to start sticking my scruffy phizog in their post-wedding poses, so I took a walk around the park, resplendent in late summer sunshine.

As can be expected, the evening involved a fine wedding feast followed by large amounts of champagne and beer. Lovely! 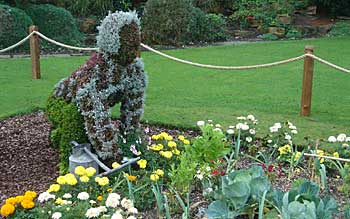 Next morning, we took a walk through Lenton, an affluent, hilly suburb sporting some stunning Victorian Gothic architecture.

We made our way back to Nottingham ‘castle’ (coming from Wales, I have to say I’m a but underwelmed by the thing) and enjoyed a fine coffee in the cafe after admiring the weird flower display (above) in the castle grounds.

The castle affords some excellent views over the city, but not all of it is a pretty sight.

Despite having some fine architecture lurking in the city, Nottingham has been blighted by hideous, loud, modern office developments which seem to bear no relation to anything around them ( the white ‘mini-dome’ thing and the new court buildings by the railway are particularly bad examples). 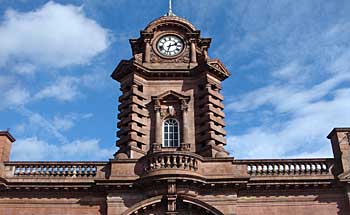 As we hastened back to catch our train, I managed to grab a quick picture of the clock tower at the splendid Neo-Baroque station, built in 1904, by A.E. Lambert.

A weekend in Nottingham