Last night’ we hit the bright lights of Spalding, starting the evening with a few pints at the Lincolnshire Poacher, a lively pub heavily oversubscribed with hen parties.

We later adjourned to Indus, a fine Indian restaurant close to the railway station.

The food was good, well priced and the service prompt and polite – so much so that we were rather baffled why the place wasn’t busier on a Saturday night. We waddled out thoroughly stuffed….

This morning, the skies had clouded over and it was pissing it down – no country walks for us today!

Instead, we drove over to check out the delights of Stamford, the hometown of our chum, DJ Sonik. 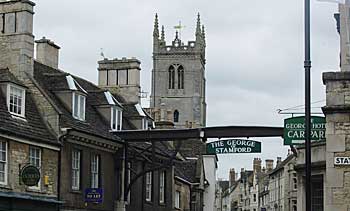 We wandered about the town but were saddened to find the Stamford Museum closed – I’d been looking forward to admiring their reknowned life-size model of the World’s Largest Man.

No matter, we decided to grab some lunch at (ahem) ‘Truly Scrumptious’ – a small, basic cafe/restaurant, clearly much appreciated by Stamford’s eldery citizens. Silver hair was in!

As expected, the veggie choice was slim. Wafer slim, in fact. I ordered a stilton and brocolli bake, but I’m not sure that’s what came out of the kitchen. Whatever it was, it was pretty horrible. Em’s baked potato managed to be entirely devoid of flavour, but Paul’s meat pie apparently oscillated jauntily, if not rocked.

The Meadows in the rain. Lots of it

Later on, we went for a stroll around The Meadows (where the local teen goths hang out) and admired some of the fabulous Jacobean architecture. Stamford is a very pretty place, alright.

Right now, I’m on the train to Kings Cross, quietly fuming after a Herr Diktator in a peaked cap insisted we pay an extra £18 on our tickets because we caught an earlier, empty train. Apparently, catching a different train on a Sunday afternoon is punishable by serious wallet lightening.

A trip up the BT Tower 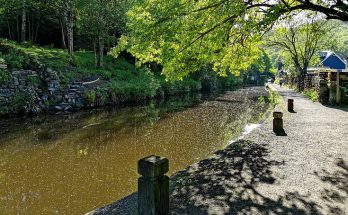 3 Comments on “A trip to Spalding to Stamford, Lincolnshire”