Thursday saw the first all women-DJ Offline club night at the Brixton Ritzy and it was a hoot!

Instead of worrying about what I was going to play I could just sit back and listen to the excellent selections being played. And get drunk, of course.

DJs included a selection from the Actionettes, my old chum Helen McCookeryBook (from Brighton punk band The Chefs and country band Helen and the Horns), Han , Furvert and Adrienne. 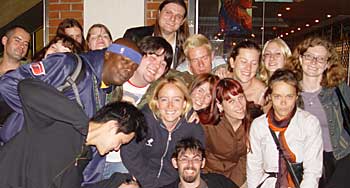 The crowd was just about the right size too: the whole point of the night is to provide a chilled out, laid back, weekend warm-up and Thursday’s crowd was perfect!

On Friday morning I had to shake off my hangover pretty damn quick as I had to talk web strategy and knowingly opine about ‘the future of the Internet’ (eek!) in front of 35+ people from a well known media magazine.

Happily, they were a sound bunch of folks and the talk went surprisingly well. Beer money earned! 🙂 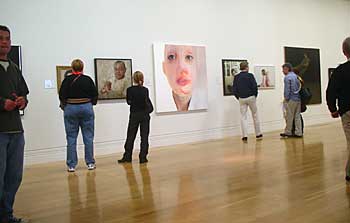 I popped into the National Portrait Gallery afterwards to check out the BP Portrait Award 2004. It was both inspiring and depressing.

I didn’t feel so much over the hill, as at the back of the Himalayan mountain range.

Presentations and all girl punk

Saturday: bands and beer at Glastonbury