We couldn’t stay long as a trip to town was needed, grabbing a quick coffee in the Photographer’s Gallery.

In the evening, we went to a friend’s wedding party at the Brockwell Park Lido – and what with all that beer, the warm evening air and the poolside bar I could almost imagine I was in Greece. Well, nearly…. 😉 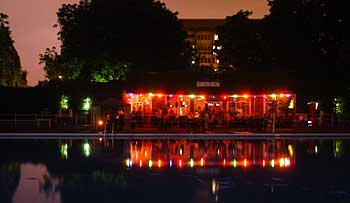 Next day, suitably hungover, we ventured north to Clissold Park for the Alternative Euro 2004, where urban75 were fielding a team, ably managed by their firm-but-fair coach, Amy. 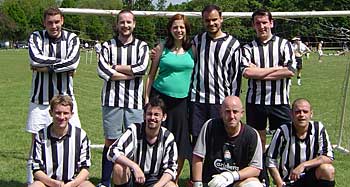 Sadly, it wasn’t to be a glory day for the urban75 team, but it was their first competition so it’s early days yet!

Apparently, there’s talk of a volleyball team starting up soon too!

Later on there was much drinking to be done in the Rose and Crown nearby before dashing off home to watch England turn a glorious victory into a depressing defeat in the last three minutes of the game against France.

Maybe – just maybe – my beloved Wales might finally qualify for something in my lifetime….

Oh, and finally, I’ve just posted up another big collection of photos taken from my April trip to St Ives – if you’re stuck in an office and would rather be someplace else, maybe these pics will help you pass the time and think of nicer things than some arsey accounts manager!

Pub quiz: Team Not So Clever