After a dull day fiddling about with tedious computer/site admin stuff, it was a relief to get out for a few beers in the evening.

I went to the Spitz Club in Liverpool Street (East London) for the launch party of Heist’s new album.

I like the band. Featuring a boy/girl eclectic line up of guitars, violins, trumpets, keyboards and drums they make a lush, cinematic sound that is best summed up as Pulp-meets-Scott Walker, mixed up with a bit of new wave and the 60s. 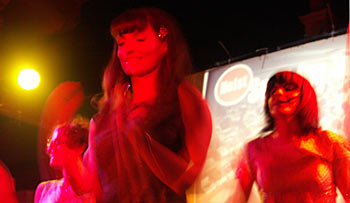 Supporting the band were the Actionettes, who put in a lively set of 60s moves in the sweltering club (when will they sort out decent air conditioning in the Spitz?).

Tonight, I tried my new Minolta A2 camera again after my first, less-than-successful attempt to use it for band photos.

This time I switched to manual focusing and spot metering and had far better results – and the little black and white movie I shot came out very well(sorry – I can’t post it here because of bandwidth problems).

Miraculously, we managed to get a cab straight back to Brixton at the end of the night. Maybe it’s only on weekends that some cabbies turn into south London-allergic arseholes….

Sparkle galore and an early New Year with Misty Miller, Black Honey & The Near Death Experience at Hackney’s Moth Club

A right old hillbilly hoedown at the Brixton Offline Club