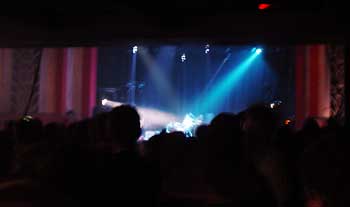 Well, I liked the album and was well excited at the prospect of a freebie ticket for their gig at the Coronet, Elephant and Castle, London.

Here’s some history about the venue:

It was built in 1872 as The Theatre Royal, with the original building being destroyed by fire 1878.

It was then rebuilt as The Elephant & Castle a year later and then converted to the ABC cinema in 1928. After a succession of renamings, it finally ended up being known as the ‘Coronet Cinema’.

The cinema finally closed its doors in 1999, but a £2million refurbishment programme saw it reopening as a multi purpose venue hosting club nights, live music events, film screenings and (yuk!) and corporate events.

Anyway, back to the gig. It has to be said that the Coronet isn’t much of a venue. The entrance is dark, dingy and uninviting, the bars woefully under-staffed and – unlike the Brixton Academy – the floor doesn’t slope towards the stage, meaning that many people couldn’t see a thing.

Moreover, there seemed to be an awful lot of drunk, miserable blokes at the gig who seemed more interested in wolfing down the beers than enjoying the band.

To be honest, I was a bit unimpressed. As you can see from the blurry picture above, the view was rubbish, the venue wasn’t very attractive and the beer selection was uninspired.

Despite this, Franz Ferdinand started brightly and I certainly enjoyed the first few songs, before a nagging doubt started to enter my head: haven’t I heard this all before?

There’s no denying that the band have got some good tunes, but the charisma count was registering dangerously low and everything seemed a tad perfunctory: where was the excitement, the edge , the sense of fun and the originality?

We left a tad disappointed, but happily Ken Livingstone’s rejuvenated bus service ensured that we could make it back to Brixton in time for a pint in the Albert, with a late night snifter in the Lounge following….

Old and new, Elephant and Castle.

A day in Dover and Dover Castle