Tonight, I ventured north to the Betsy Trotwood pub in Farringdon to bid farewell to Internet Magazine.

The magazine’s been going since 1994 (it was just three months off its 10th anniversary) and was always a great source of inspiration and enjoyment for me.

I was lucky enough to be invited to write for them in 1998, and since then have been writing reviews, features and ‘expert helps’ for the mag – and enjoyed every minute of it.

What made the magazine stand out was its sense of ‘family’: it may have been owned by a hard-nosed, uber-corporate, but the vibe amongst its writers, producers and freelancers was warm, friendly and honest.

So tonight, the current staff, ex-writers, friends and freelancers gathered for one last drink as the last Internet Magazine ever was put to bed.

Although the beers were free and the company first-rate, I can’t shake off a lingering melancholy and a sense of frustration and anger that such a good mag should bite the dust – even when it wasn’t losing money. That’s the big bad world of corporate finance for you. 🙁

Goodbye Internet Magazine: you’ll be missed. And best wishes for the future for my mates who now find themselves out of a job. You did a fucking good job! 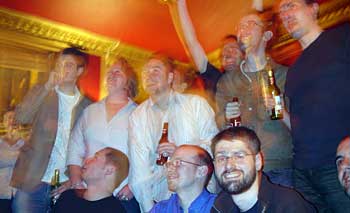 A drink at the American bar

Download your free copy of the BrixtonBuzz music, events and club listings magazine