After the uber-stress of trying to sort out a new server for urban75, a bonkers, up-for-it weekend was definitely called for – and I wasn’t disappointed.

On Saturday, I finally made my first Urban75 Walk Club meeting, getting up early in the glorious Spring sunshine to meet at the Market Porter pub (by Borough Market).

A double strength extra-fresh cappuccino from the Monmouth Coffee Company soon dusted off the cobwebs, and the assembled urban75-ers headed off to London Bridge to catch the train to Chislehurst.

We hooked up with the others in the pleasant beer garden of the rather tatty Ye Olde Station Master pub, before making the short walk to Chislehurst Caves.

Sporting a visitor centre straight out of the mid-70s, the caves cover over 20 miles of passageways hewn by hand from the chalk, deep beneath Chislehurst. 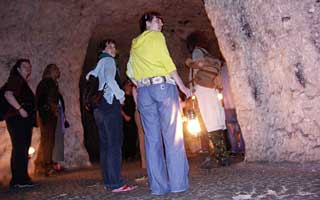 The caves were dug over a period of 8000 years by Saxons, Druids and Romans excavating chalk and flint, but they were to play a more important role in history when they formed the backdrop to a Dr Who episode!

In the 1960s, the caves were the ‘it’ place to ‘take a trip’ with bands like Led Zeppelin, Pink Floyd and Jimi Hendrix getting the subterranean heads nodding.

There were no such thrills for us, but it’s well worth the £4 to stumble around in the darkness, with only a kerosene lamp to light the way.

Naturally, many beers were needed after the underground trip, so we stomped through some woods before finding a lovely pub with a large sloping lawn for us to slob all over.

In the evening, we continued the quaffing with a trip to the People’s Republic of Disco at the Windmill, Brixton Hill. 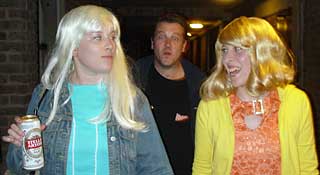 By this time my friends were turning a little odd, donning blond wigs and pulling strange faces, but after a few beers, no one noticed…

A weekend in the Peak District