Updates from a fabulous night in the West End, watching feminist Oregon rockers, Le Tigre at the Astoria. And they rocked! 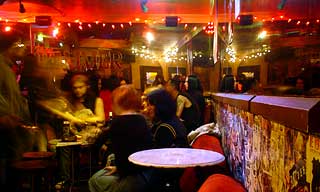 We met up with urban75-ers Kea, Phototropic, Dubversion and Furvert at the CrowBar (a no-nonsense rock/goth bar opposite Foyles Bookstore) before heading into a packed Astoria – where we bumped into another urban75-er IanW and his lovely girlfriend.

Le Tigre were fantastic: a head on clash of Human League meets X Ray Spex meets The Slits meets the B52s meets the Shangri Las all mixed up with attitude and a healthy dose of political outrage. They were chuffing superb!

The vibe inside was friendly, up-for-it and fun. And cans of lager were only £1.50! Definitely a club to check out again. We left as the mixed dancefloor went mad to the sounds of Sparks: “This town ain’t big enough for the both of us”.

Amy Winehouse at the Astoria, London