I’ve had such a hideously unproductive day today, responding to a thread on urban75 asking for people to post up pictures of their desktops was just about the only thing I achieved.

So here it is. Da-daa! My desk (looking unfeasibly tidy after a bit of a sort out over the weekend). 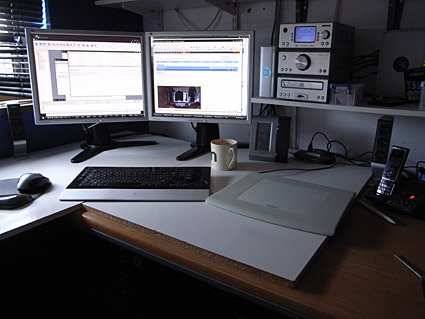 Sharp eyed readers will note the knackered blinds to the left (one of the pull strings broke so it now only goes up on one side) and a rather ancient Wacom art tablet. 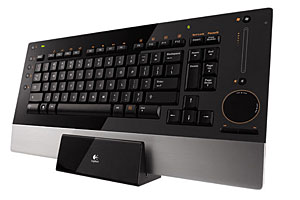 The keyboard is the rather flash Logitech diNovo Edge Bluetooth which I got to review last year.

It’s a veritable smudgy finger magnet but is delightfully slim and space age looking with its glowing lights.

Another object your beady eyes may have clocked is the Pure Digital DMX-60 DAB radio/CD player on the shelf (I reviewed its predecessor the DMX-50 back in 2005).

The system lacks power big time, but the radio ‘rewind’ feature is indispensible – I only wish the feature was available on more mini music systems.

The phone to the right is a BT Verve, picked up from Amazon for just �13. The sound quality is OK but it’s one of the few landline phones that looks like it may have come from this century. 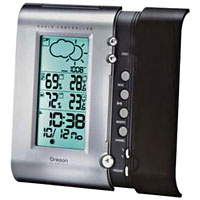 Next to the two four year old Viewsonic monitors is an Oregon Scientific Wireless Easy Weather System Pro, which sounds really posh, but is a basic barometer/thermometer that talks to a sensor outside my window.

It’s usually quite accurate and offers an inside/outside temperature readout – thanks to sitting in a room full of not-particularly efficient or new equipment, the weather inside is usually set to ‘Scorchio.’

And there you have it. My desktop. Send us a link to yours!

Today I snarled and laughed at my stereo

Weird moment of the day – BBC London in Brixton

Rooted to the spot

Happy Christmas, 2011! May the ales be fresh and tasty.