This was the scene outside the ghastly Brixton Square gated development on Coldharbour Lane yesterday morning, with all the workers out on the street. 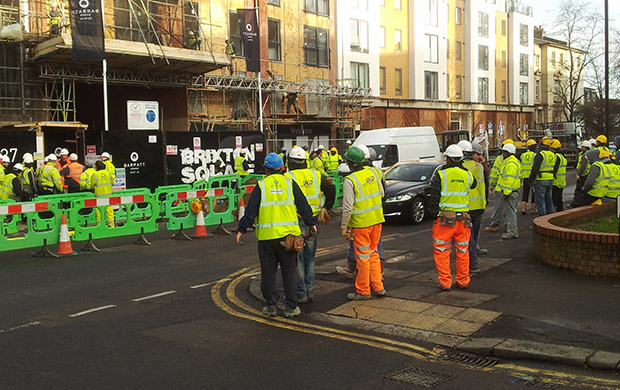 My first hope was that this was the start of a powerful union action that would being the Barratt Homes empire to its knees, or maybe a disastrous construction fault had been uncovered which would result in the building being razed to the ground and the space returned to community use (see Cooltan Arts).

Or, even better, I’d hoped that the workers had turned against their bosses in a peaceful uprising and were reclaiming the block to provide much needed social housing in Brixton. 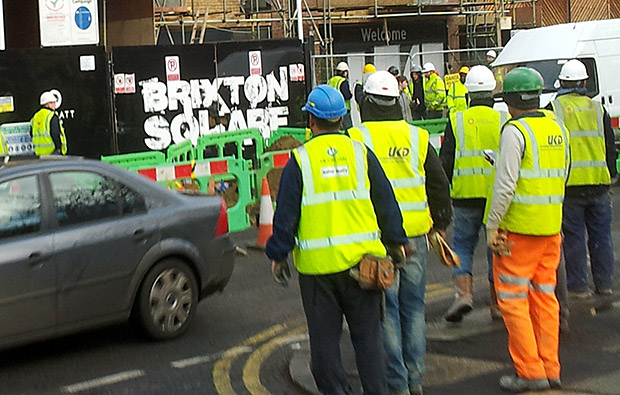 I spoke to a few workers outside and they told me the full story – and it wasn’t as revolutionary as I hoped.

Apparently a big shot “wanker” had come down from Barratt Homes’ head office and uncovered a trailing cable (which the workers said was unrelated to them) and a door not hung correctly on site.

The head office bigshot wanted to flex his muscles and show the workers who was boss, so he ordered them all off site, and that’s where they were forced to stand for half an hour.