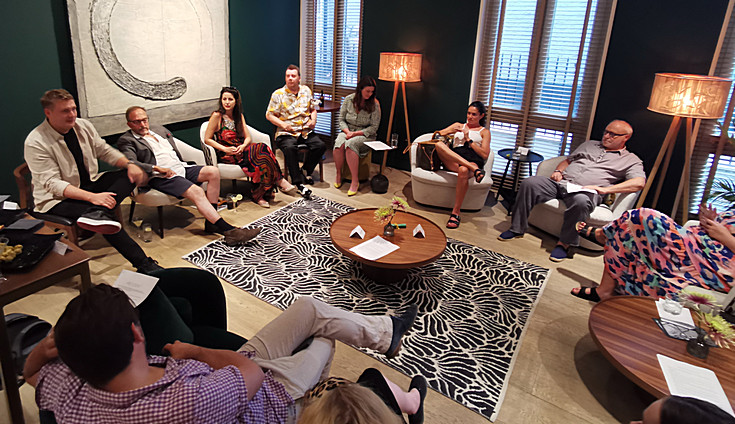 We were recently invited to an evening of Soho tales at The Resident Soho hotel, accompanied by a tour of the hotel and a jaunt to the local jazz club next door, The Piano Bar.

The Resident, which privately runs five hotels in the UK, describes itself as offering “excellent rooms and relaxed enclaves in exceptional locations”. It aims to distinguish itself from other choices of where to lay your head in the middle of London (or Liverpool) by making guests feel truly like residents of the areas in which they’re staying.

The evening curated by The Resident Soho certainly left us feeling steeped in Soho history, and with an appreciation of the uniqueness of the neighbourhood. 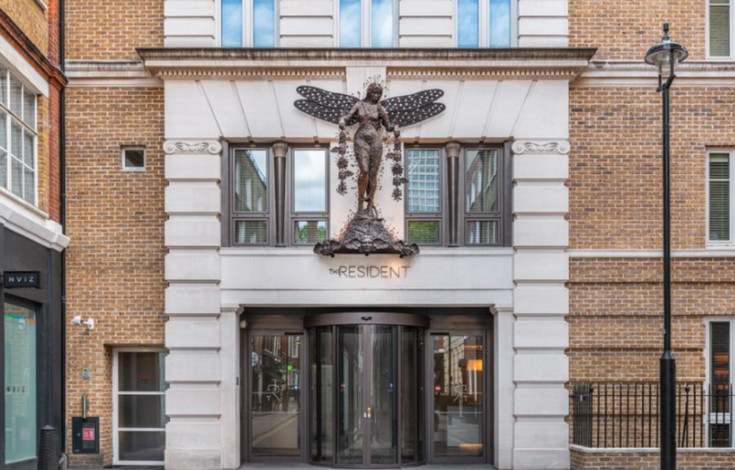 Photo: courtesy of The Resident

According to Tony Shrimplin of the Museum of Soho, the site of what’s now The Resident Soho was formerly a three-story brick house likely built in the 1680s, and boasts a varied history prior to destruction in the second world war. Its past iterations include a riding school; home to Lords, Ladies, and MPs; a Masonic lodge meeting point; an antique furniture warehouse; and offices of the British Board of Film Censors.

Having arrived at its present-day shape as a stylish hotel, we had our thirst quenched by a few bottled cocktails from Catford-based Bottle Bar & Shop and appetites whetted by a spread of veggie canapés from a local purveyor.

We were intrigued to hear from the varied panel of longtime Soho residents and frequenters assembled by the hotel: David Saunders, co-author of local Soho histories in Some Kind’a Soho; Bianca, an outspoken burlesque performer known as the “Soho Showgirl“; Tony Shrimplin, Director of the Museum of Soho and 30-year resident; and George Hudson, owner of private jazz and cocktail lounge Piano Bar Soho.

As you might expect, the panellists recalled earlier, seedier eras of gangsters and strip clubs; of legendary Soho characters like Francis Bacon that helped make it an artistic “melting pot of madness”.

But they also spoke about their beloved neighbourhood as a small community welcoming of all types: a place that never turns down the chance to host a parade and celebrate; a village of people that looked after one another, especially during the lockdowns of recent times.

One panellist recalled as an example how everyone came together and turned up for the funeral of Bernie Katz in 2017, former front of house of the famous Groucho Club on Dean Street and known as the Prince of Soho. 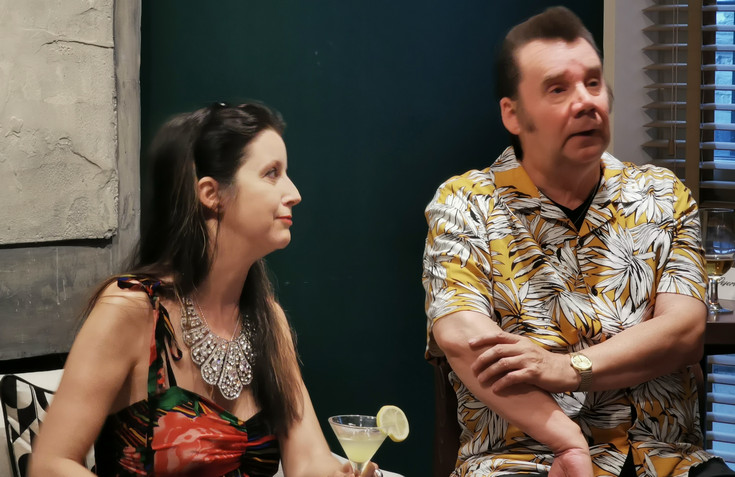 Noting how no bus routes pass through the area, Saunders described a typical day meandering from café to bar, catching up on local gossip (“you can’t walk from one end of the naughty mile to the other without bumping into someone you know“) – and how easy it was to not leave the square mile for days. Hudson recalled a visiting editor’s rider requiring lodging to be within a mile of The French House.

What struck a chord with us were the familiar descriptions of gentrification and “sanitisation” that the panellists felt had been creeping in, especially since the death of Paul Raymond.

As Brixton residents, we empathised with the panellists’ wariness of restaurant and bar chains moving in, and agreed with one’s suggestion to offer lower rates for independents than big business, and encourage people to actually live in the area rather than just buy for investment without local benefit.

Whilst the panellists fielded questions from the 20 or so attendees in the room, a copy of the collection of interviews with Soho stalwarts that Saunders co-wrote was passed around – it’s sadly now out of print, but we can confirm it’s packed with beautiful portrait photography and no doubt gives a taste of what it’s like to live, work, and gallivant in Soho, which we got a hint of during the talk. 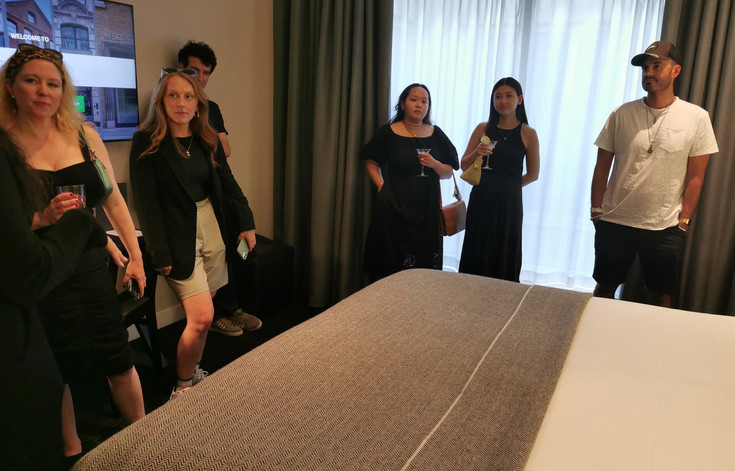 Before leaving the building, we were treated to a tour of one of the hotel’s standard rooms – far from standard if you ask us.

Whilst straightforward and modern in terms of décor, no doubt we’d feel more than comfortable plunging face-down upon one of their comfy looking beds after a long night out scouring the late night haunts of the area.

Alternatively, the rooms are also set up to encourage nights in, with a “concealed mini-kitchen” in each, and guest access to a grocery service.

One of the advertised perks of staying at any of The Resident’s five establishments is access to its Insider’s Map, which treats guests to a few discounts with local businesses (such as free entry to the Piano Bar and discounted food and cocktails, in Soho’s case). 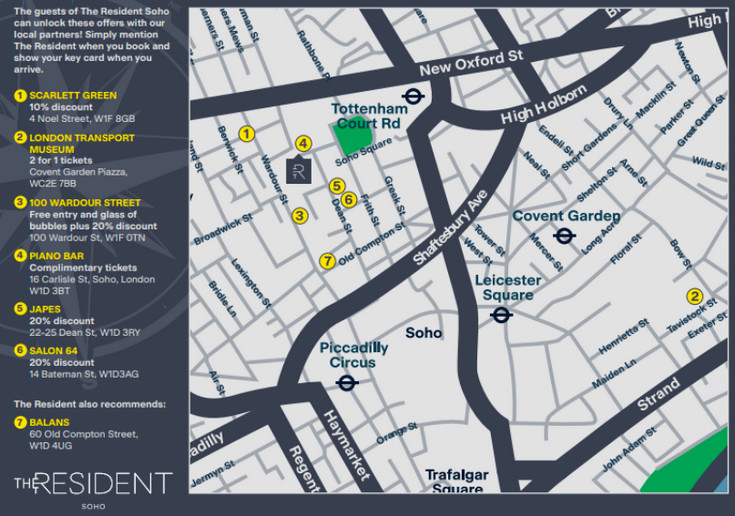 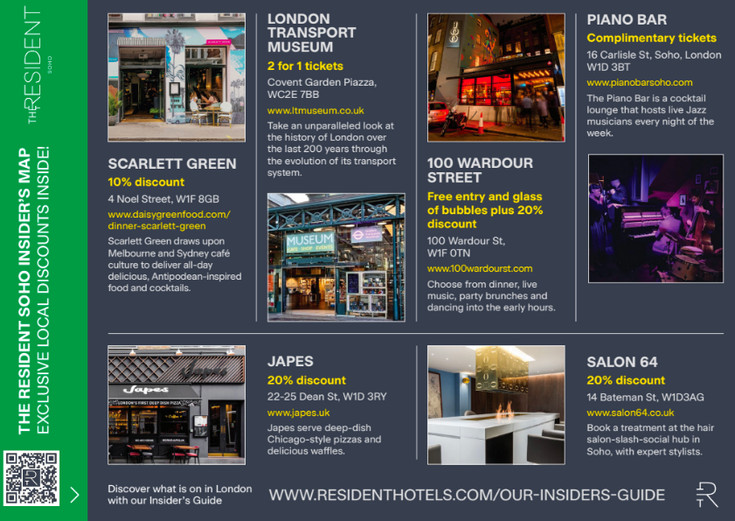 “We love championing local excellence, so our map enables guests of The Resident Soho to explore the local neighbourhood while enjoying exclusive discounts with our fabulous partners and supporting local independent businesses. What’s not to love.”

The Resident Soho is nestled in at 10 Carlisle St, Soho, London W1D 3BR. Based on a peruse of its website as of the time of writing, room rates range from around £250-300 for a single or standard double room through to £400+ for larger suites.

If you’re lucky enough to afford it, we’re pretty sure you’d be in for a treat. 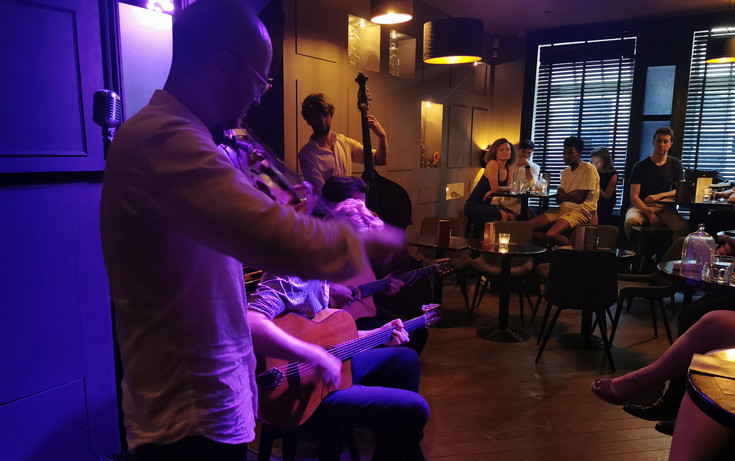 The Piano Bar Soho housed in a townhouse off of Soho Square promises live music every night. If you’re not a member, you can gain entry by buying an advance ticket for £5 for a spot in the cocktail lounge, or £10 if you fancy a “music ticket” which presumably gets you a bit closer to the action.

Mind you, the cocktails (while tasty) will set you back a few pounds as you’d expect in central London, but we think that’s a pretty decent ticket price if you’re keen to enjoy some live jazz in an intimate space in the heart of Soho. 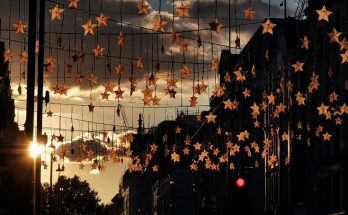