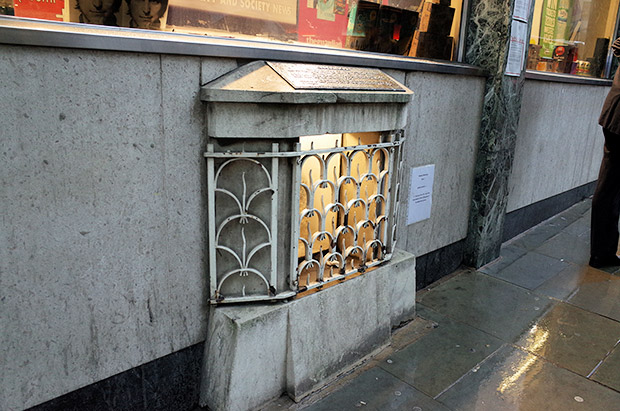 Gaze your eyes at the underwhelming spectacle that is the London Stone, a historic landmark to be found in the front of a shop at 111 Cannon Street (opposite the site of St Swithin’s Church). 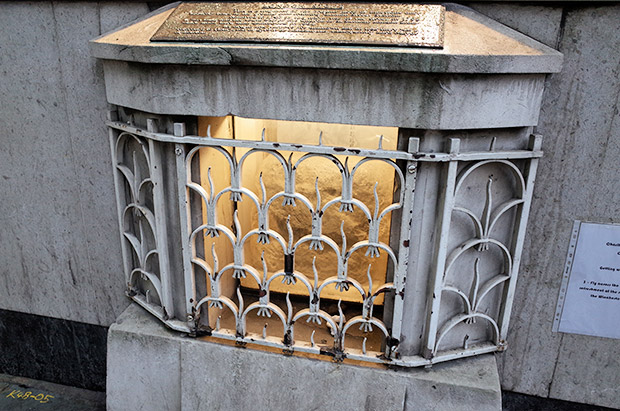 Contained behind the protective grill is an exciting-sounding ‘regular block of oolitic limestone’, which is a  remnant of a once much larger object that had stood for many centuries on the south side of the street.

A 1960s study concluded that the Stone was made from Clipsham Limestone, a good-quality building stone from Rutland which had been transported to London in both the Roman and medieval periods, although others have argued that it is made from Bath stone. 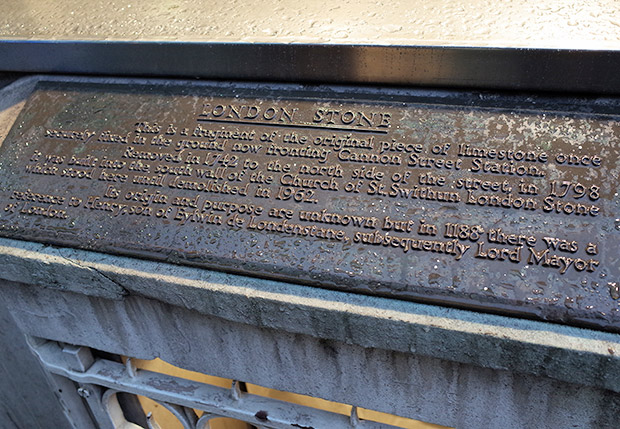 The inscription above the stone reads:

LONDON STONE
This is a fragment of the original piece of limestone once securely fixed in the ground now fronting Cannon Street Station.

Removed in 1742 to the north side of the street, in 1798 it was built into the south wall of the Church of St. Swithun London Stone which stood here until demolished in 1962.

Its origin and purpose are unknown but in 1188 there was a reference to Henry, son of Eylwin de Lundenstane, subsequently Lord Mayor of London. 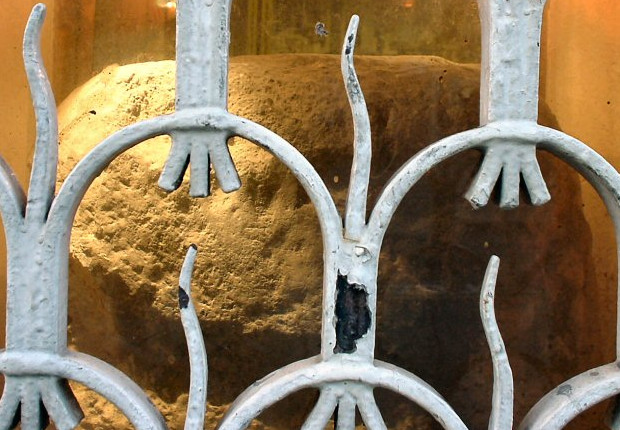 First mentioned in historical documents as far back as the year 1100, both Shakespeare and Dickens have mentioned the stone in their writings, and it remains the subject of  countless myths, including a particularly dubious one which insists that it was the stone from which Arthur withdrew Excalibur.

Also known as the Stone of Brutus (after the mythical founder of the capital), the actual age and purpose of the stone remains a mystery, although the most prevalent theory suggests dates it is of Roman origin.

However, English poet, painter and printmaker William Blake believed the relic once marked a sacrificial stone circle used by druids whose victims ‘groan’d aloud on London Stone.’ whereas John Dee, occultist and adviser to Queen Elizabeth I, reckoned that the stone had magic powers.

Last year, developers wanted to move the stone to a new nearby site [link], which promoted naysayers to remind them of the ancient warning linked to the artefact –  ‘So long as the Stone of Brutus is safe, so long will London flourish.’

Read a photo feature about the stone here: The London Stone.

One Comment on “An underwhelming historic attraction: the London Stone in the City of London”