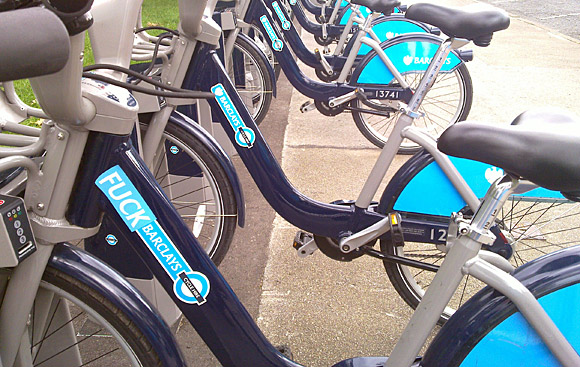 TfL have released a press release saying how chuffed they are to have some of their Cycle Hire bikes featuring designs by Jean-Pierre Braganza, as part of London Fashion Week.

I have to say I’m more chuffed to see these subversive anti-Barclays stickers appearing on bikes all over London.

Naturally, Daily Mail readers are already indulging in knee jerk paroxysms of rage about this, although there was one sensible response to their article, which described the small stickers as “vandalism”:

To call this vandalism as though the bikes have been damaged is wrong, particularly when the banks themselves have done so much damage to the country with their continued ripoff practices,and if anything is obscene here its the banks profits at their customers expense, not a tiny little sticker that merely states what millions of people in this country think anyway.

I’m a big supporter of the Cycle Hire scheme, and will go out of my way to try and hire one of the “vandalised bikes” tomorrow.