I spotted this old Amstrad amp in the window of a Cardiff comic shop recently, and was instantly reminded of the bitter-sweet times I had when I owned one.

With its futuristic Space 1999 lines, I thought the future had arrived when I unboxed it. Sadly, the performance was still deeply entrenched in the broken down Britain of the 1970s.

For the budget audio aficionado

Festooned with no less than nine buttons and five – count ’em – sliders, this teak-encased, silver and black amplifier from British manufacturer Amstrad looked like it was custom made for a bachelor’s pad, with its complicated, man-pleasing controls demanding the expert attention of envelope-tweaking audiophiles. 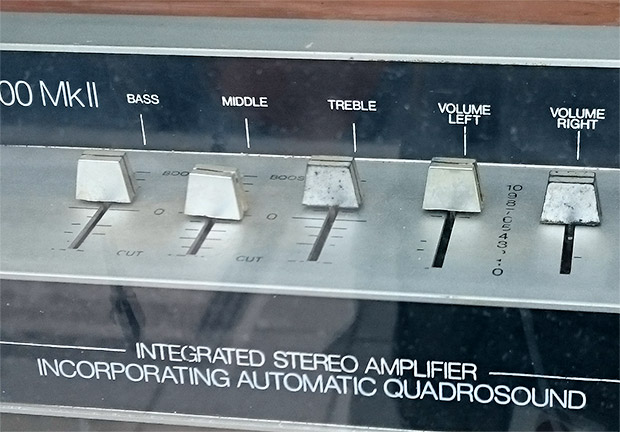 A surfeit of sliders

Whereas most conventional amps of the time had to make do with rotary bass and treble controls, Amstrad went one better with a suite of three sliders, adding that oh-so essential ‘middle’ control into the mix.

Accompanying the three-strong tone controls were separate sliders for left and right volume controls, letting bedroom DJs strike a studio engineer pose as they faded out the Supertramp. 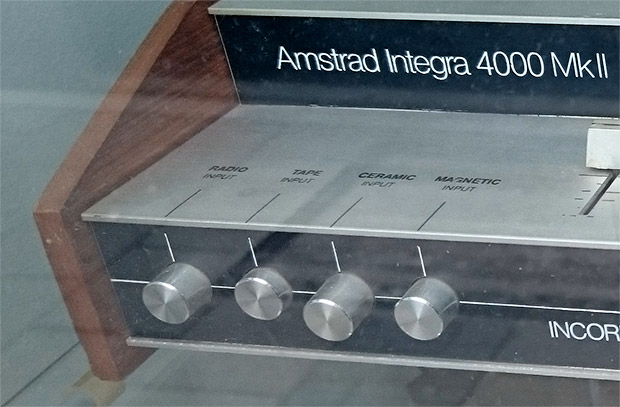 Positioned under the bank of sliders were two rows of metal push buttons arranged in groups of four to the left and the right.

The four shiny buttons on the left let users select between Radio/Tape/Ceramic and Magnetic inputs (the last two catered for two different sorts of turntable cartridges). 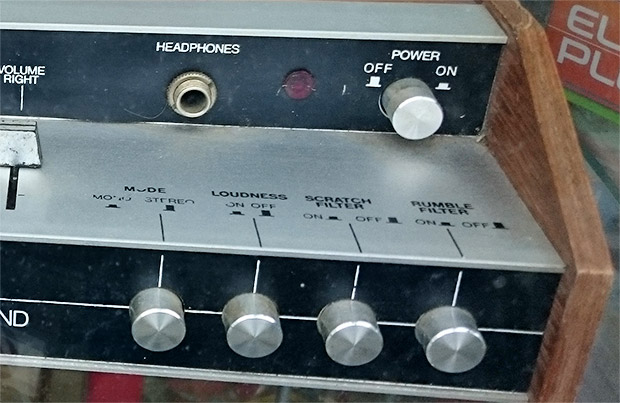 Moving along to the array on the right, you can see buttons for mode (mono/stereo), loudness (on/off), plus scratch and rumble filters, while on the top tier above there’s an on/off switch (with a bright red power indicator) and a headphone socket.

The loudness button was designed to boost the level of the high and low frequencies at low volume to make the music sound ‘better,’ while the scratch filter saw off the top end of the frequency response in a quest to remove any annoying noises from record scratches.

Similarly, the rumble filter attempted to reduce the low frequency sound created by less-than-stellar turntables, although in reality it just removed what little bass there was.

In large letters can be seen the words, “Amstrad Integra 4000 Mk II”  in a crisp, modern Helvetica typeface that looks almost Apple-esque, while on the lower deck the device announces itself as “an integrated stereo amplifier incorporating automatic quadrosound.”

I’m not sure if anyone knew what quadrosound was, but it certainly sounded exciting, and ‘automatic quadrosound‘ sounded even better. 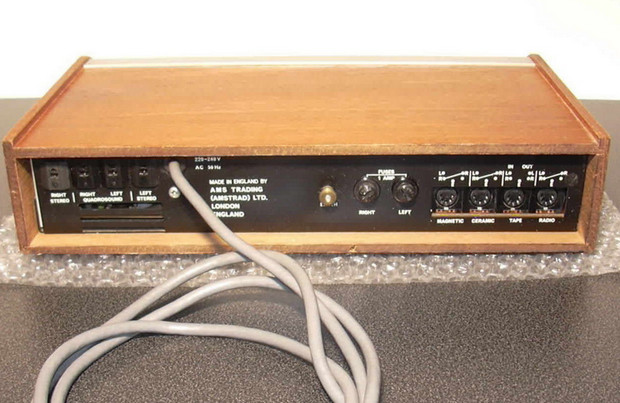 A look around the back revealed no less than four speaker outlets on one side, labelled right/left stereo and right/left quadrosound.

On the opposite side could be found two fuse holders, and four, fiddly non standard DIN sockets for hooking up turntables, tape deck or tuner, with an earth screw in the centre.

Detail of the DIN sockets and fuses. 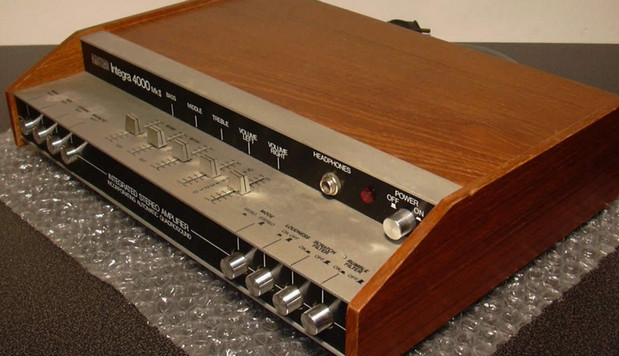 First released in its Mk I guide in 1973, the Integra 4000 was, it has to be said, rather a stylish and sleek affair that seemed to offer a lot of good looks and features for the price (this fluctuated around the £30-£40 mark). 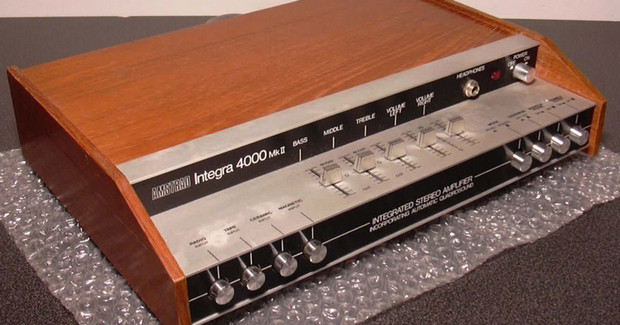 In two words: deeply flawed. I had to make several trips back to the local Comet electronics store to return faulty models, with each one having its own unique set of faults.

One made a screeching electronic noise when the power button was turned on, while another one delivered an earful of static whenever any of the sliders were moved.  Another would just turn on and off whenever it felt like it.

A poster on Vintage Radio recalls his experience:

I was given one of these when I was 11. Got my first “proper” electric shock from it too – the chassis was out of the case, it was off, but plugged in.

I picked it up and my thumb made contact with the rear of the power switch – there are pins that poke through the body of the switch, carrying live and neutral.

Of course, the earthed chassis made it tricky to let go of it. Nasty – remember it as if it was yesterday.

Once the thing had settled in (and the crackling sliders left alone), it proved to be a decent enough budget amplifier, although it would sometimes get unsettlingly hot.

On a whim, I borrowed another pair of speakers to experience the mighty ‘automatic quadrosound’ and found myself seriously underwhelmed.

Any hopes of hearing exciting four-speaker sound effects racing around the room were quickly dashed and the speakers swiftly unplugged.

A Vintage Hi Fi repair shop commented, “Amstrad’s idea of quadsound is putting the rear speakers in series with the main ones and out of phase!”

It had to go

I can’t remember how long I kept the 4000: it’s constant quirks and random noises grew increasingly irritating until I eventually splashed out my paper round money on the less esoteric but infinitely better sounding Rotel RA311 amplifier.

I still have a bit of a soft spot for the Amstrad – it may have been a pretty awful sounding thing with terrible quality control, but the design was quite a radical departure for the time and still looks pretty smart to me now. 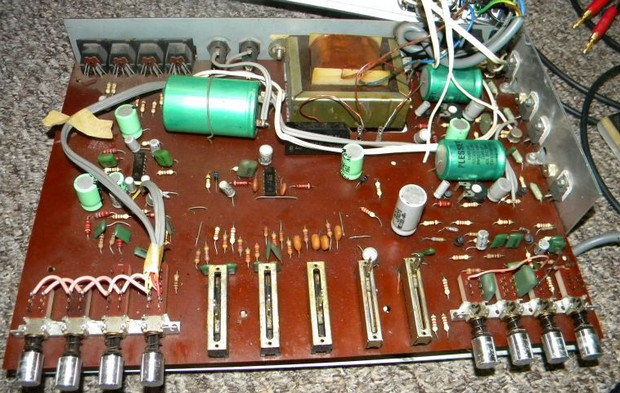 See it in action!

Here’s a short video showing off those wonderful crackling sliders:

Here’s a couple of contemporary adverts: there seems to be some confusion about its specs: the first advert says 12W RMS and the second says 15W. I love the fags and ashtray on the first one. 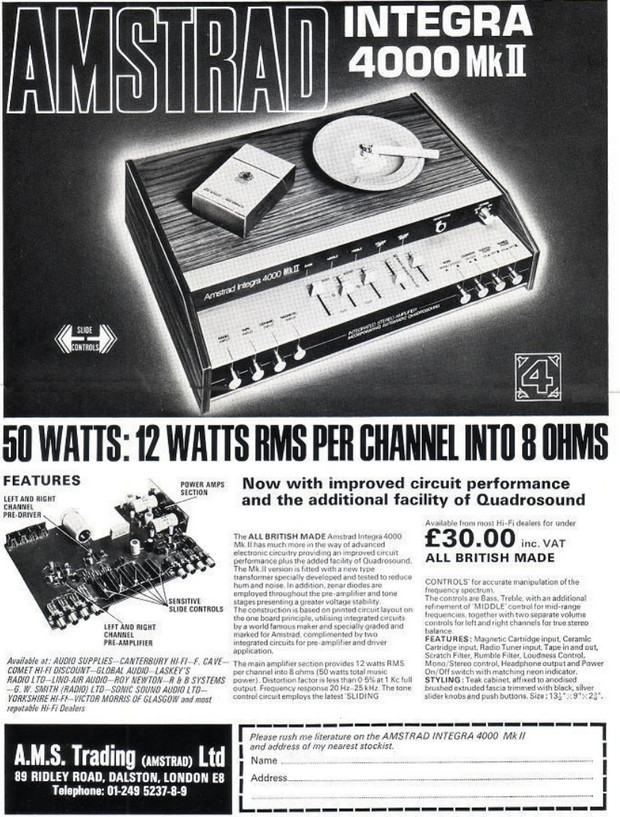 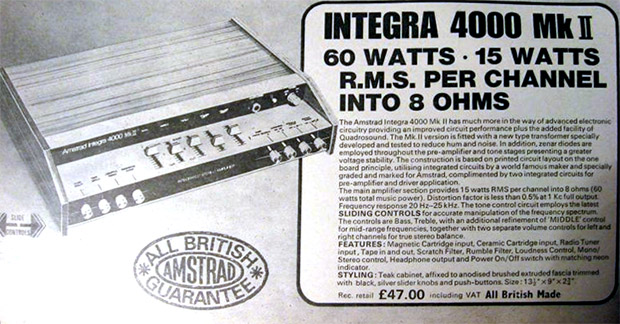 Behold! The majesty of Tottenham Hale!

In photos: United Visual Artists: Other Spaces – an audio visual treat at 180 The Strand, London

More buttons than a shirt factory