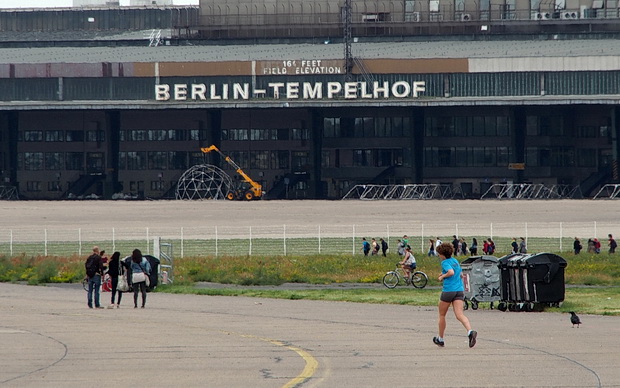 Once the third-busiest airport in Europe, the former Berlin Tempelhof Airport lay abandoned for several years after its closure in 2008 before being turned into a fabulous public park. 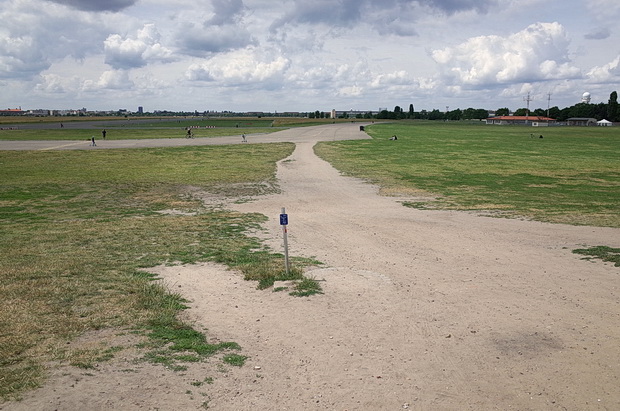 It’s not the first time that the area has been used as a park: the Tempelhofer Feld was originally a parade ground, used by Prussian forces, and later by unified German forces, from 1720 right up to the start of World War I.

Once the military had buggered off on weekends and public holidays, locals would arrive en masse, clutching baskets full of food, booze, deckchairs and umbrellas and enjoy picnics on the large flat expanse of land. 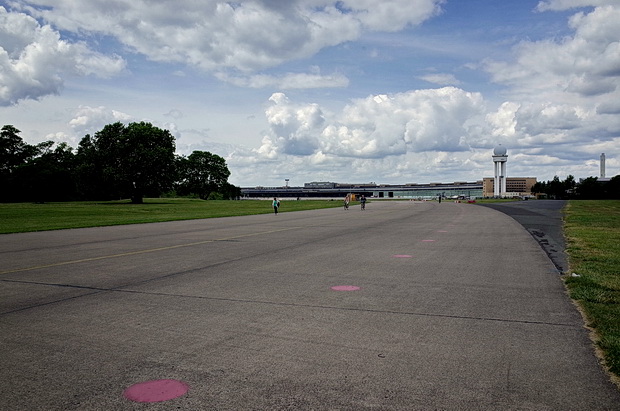 The area has a long association with flight: in 1909, Frenchman Armand Zipfel made the first flight demonstration in Tempelhof, with Orville Wright taking to the air later that same year from the same place.

An airport was built on the site in the 1920s, with its central location helping it become one of the world’s busiest airports, with up to 52 foreign and 40 domestic flights arriving and departing during 1938–1939.

Above is a photo of a Ju F 13 light aircraft being used for Lufthansa sightseeing flights in 1935, complete with Nazi insignia. [—] 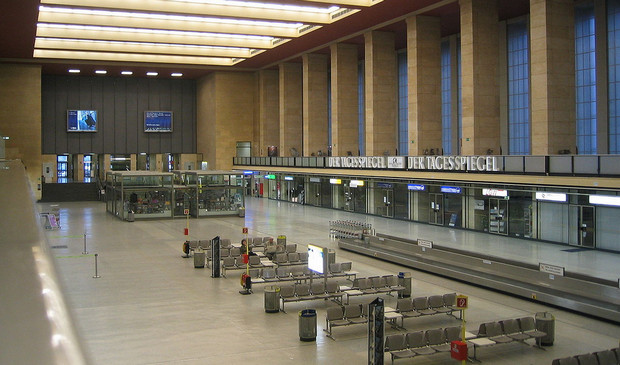 Conceived by the leaders of the Third Reich as an architectural testament to the boundless ambition of German supremacy, a striking new terminal – described by British architect Sir Norman Foster as “the mother of all airports” – was built between 1936 and 1941.

Above can be seen archive 1938 footage of the airport. Check out the posh lady getting off covered in furs! 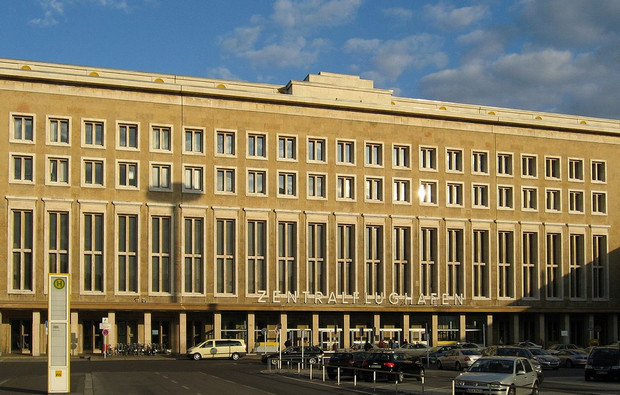 The building complex was designed to resemble an eagle in flight with semicircular hangars forming the bird’s spread wings.

The mile-long long hangar roof was planned to support stadium seating  for more than 80,000 spectators to view air and ground demonstrations.

Other parts of the airport that were never finished were the stairs up to the roof, a planned waterfall, large-scale office buildings that were to surround the western side of the circular plaza, and the control tower. 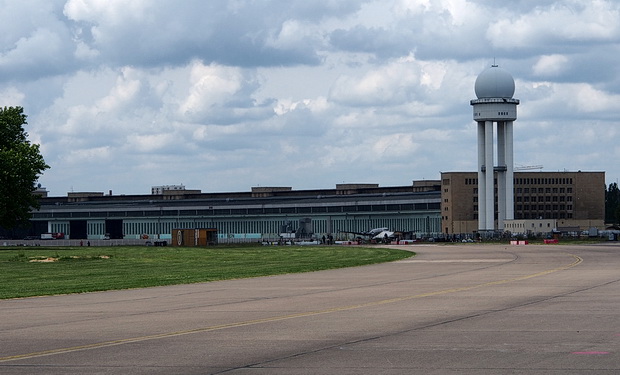 Such was its scale, Tempelhof Airport’s main building was once among the top 20 largest buildings on earth. Despite its immense size, it also hosted the world’s smallest duty-free shop! 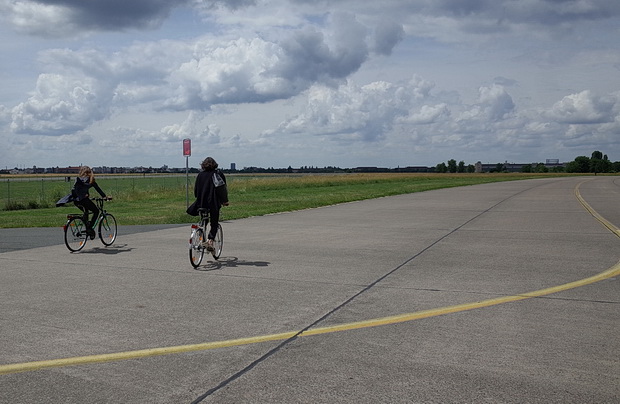 The airport was used for building fighter planes during WW2 and it played a significant part at the end of the war, with Western Allied and German signatories of the German Surrender in Berlin and their entourage landing at Tempelhof airport on 8th May 1945. 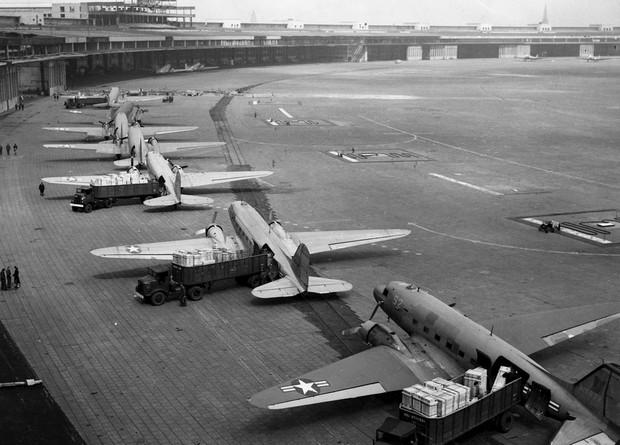 The airport was to play a major part during the Berlin Airlift (also known as the Berlin Blockade) of 1948, when Soviet forces halted all traffic by land and by water into and out of the western-controlled sectors of Berlin.

During the following eleven months, the city’s 2½ million residents were supplied by what has been described as one of the greatest feats in aviation history. 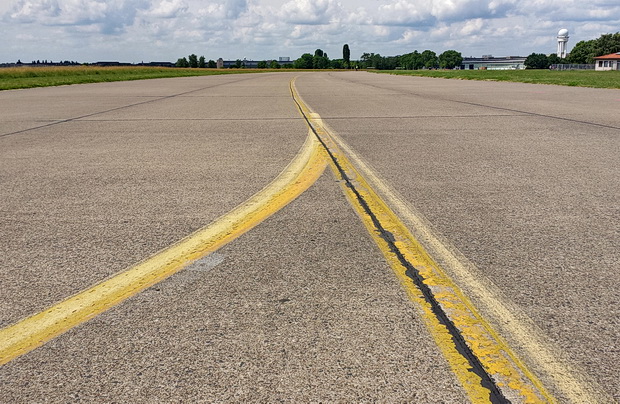 In the 60s and 70s, Berlin Tempelhof became a major international port, with commercial traffic peaking in 1971 at just above 5½ million passengers. 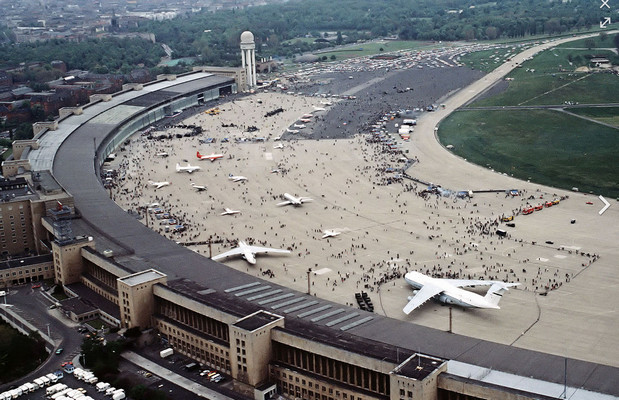 The end was in sight however, when the authorities announced plans to concentrate all domestic and international air traffic in Berlin and Brandenburg at one airport: Berlin-Schönefeld International Airport.

The last flights from Tempelhof Airport took off in November 2008. 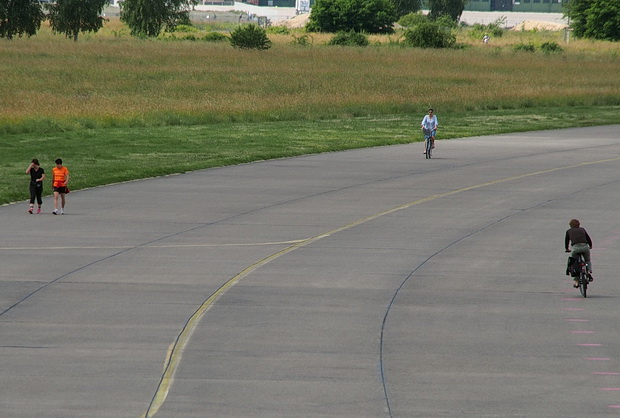 Had it been in London, the site would now be packed full of luxury lifestyle flats occupying the ‘Airport Quarter’ or something equally ‘exclusive’ and hideous, but happily they do things differently in Berlin. 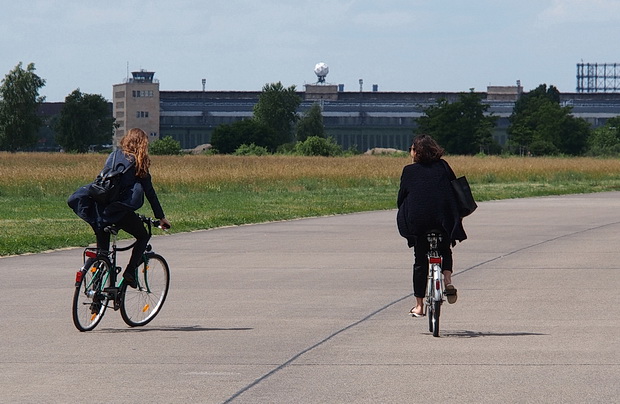 After the airport closed in 2008, the city of Berlin reclaimed the entire 386-hectare open space – larger than New York City’s Central Park – for public use. 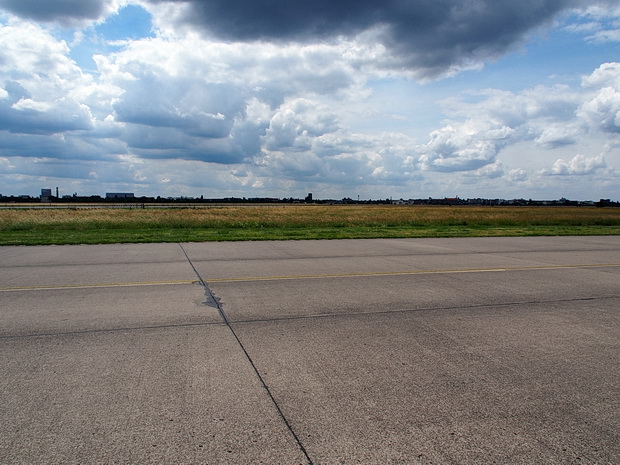 The park is just 2 miles from the Potsdamer Platz, close to the heart of Berlin city centre, and it can be accessed via three entrances at Columbiadamm, Tempelhofer Damm and Oderstrasse, and it’s open from sunrise to sunset. 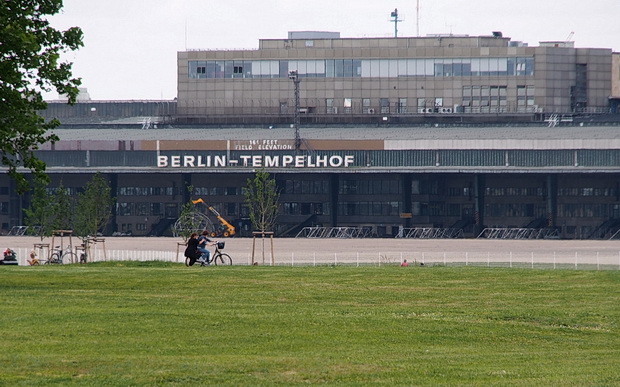 Although housing developments are planned for the edges, the Tempelhof fields will now be used as a park indefinitely.

Here’s some more views of the park taken in June 2014. Sadly, we didn’t get time to take in a tour of the building, but we’ll be back! 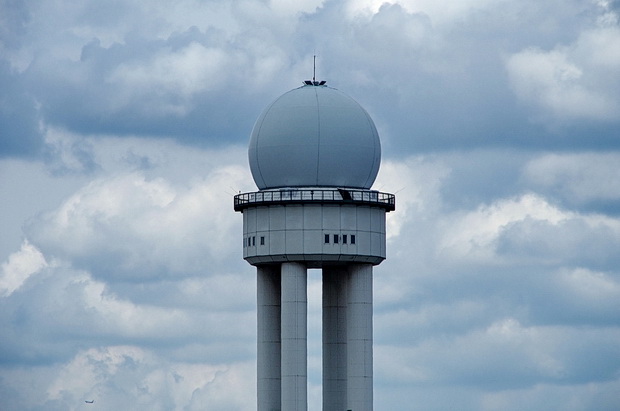 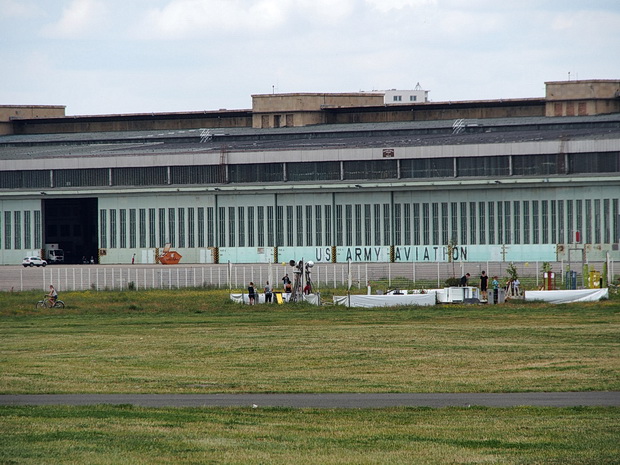 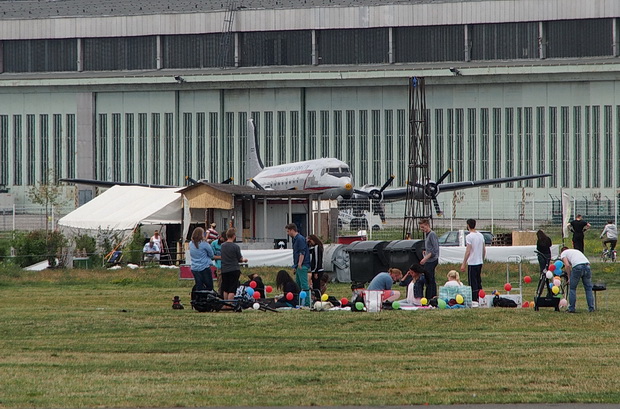 Stranded aircraft outside the terminal building. 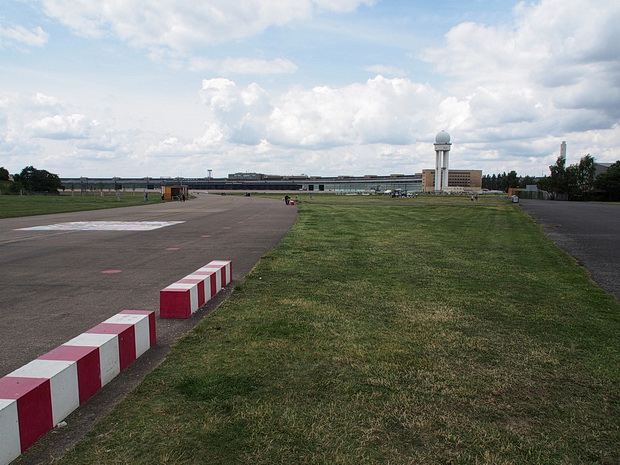 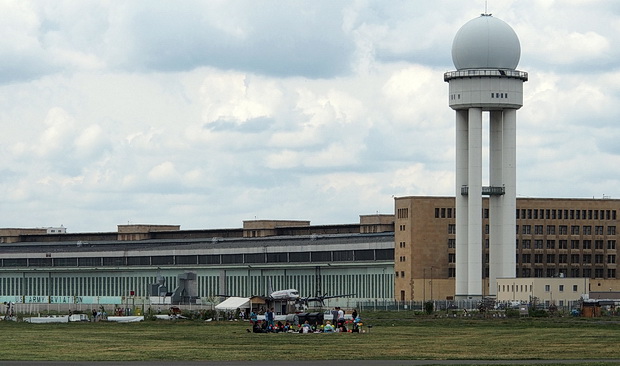 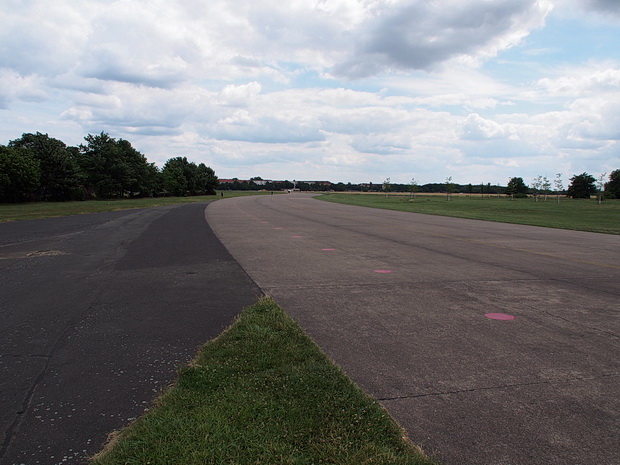 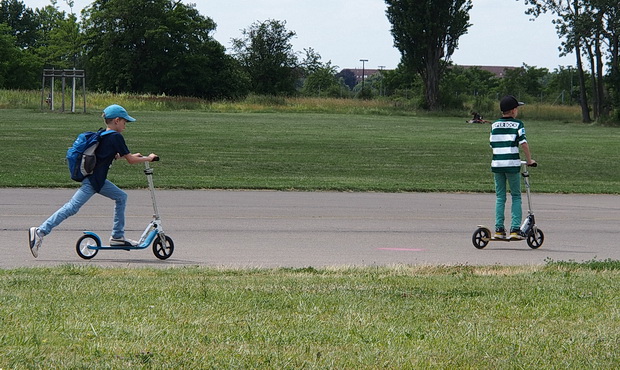 A walk through Treptower Park and the Island of Youth, Berlin

Amsterdam’s Schiphol Airport Park opens – with my photos on the wall!