I’ve been drawn to Brighton’s West Pier ever since I saw it featured in the photo story that  accompanied the vinyl release of The Who’s Quadrophenia and it’s been heartbreaking seeing its now-unstoppable demise. A particularly low tide over this week let me get much closer to the structure than before –  which was quite handy seeing as I only had a camera with a fixed wide angle lens!

I’ve written loads about the pier before (see links at the bottom of the page), so I’ll just post up this selection of views, taken on a sunny Wednesday  and a stormy Thursday morning. 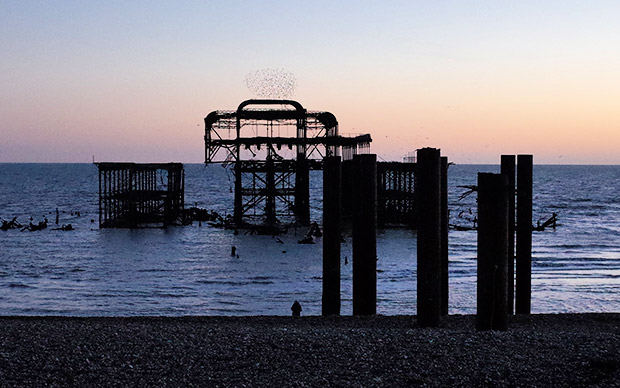 Starlings gather over the old pier at dusk. There was a bigger, more breathtaking, display taking place over the Palace Pier but my 28mm lens was never going to capture that from quarter a mile away! The next morning was cold and stormy.