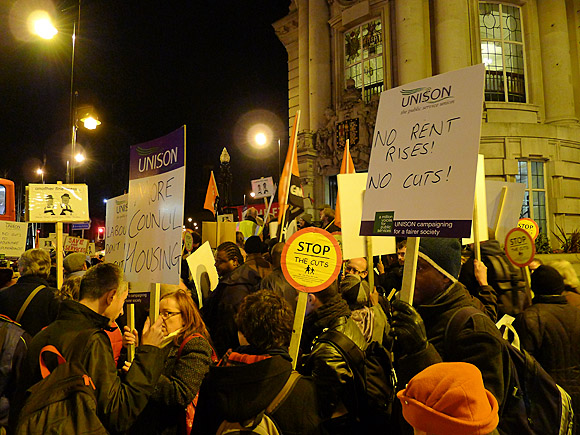 This is tomorrow – and I’ll be there!

Please come along if you can. Read on for the full press release from Save Our Services including details of the protest.

On the 23rd February Lambeth Council meets in full to vote on its proposed budget and we, Lambeth Save Our Services, will be protesting against it, just as we did on the 7th February when hundreds protested at the last cabinet meeting.

What is getting cut?

Almost every council service, anything up to 1000 council workers, 25% of all staff, this includes:

What is the alternative?

Most importantly Lambeth SOS believes that our local democratic representatives – councillors –  should not implement government cuts they openly disagree with. Lambeth Labour, who run Lambeth Council, admit that the government cuts to the budget are ideological. We agree – these are cuts made by a Conservative (and Liberal) government made up of millionaires who believe huge public service cuts and big business are the way forward.

Not only do these cuts hit the most vulnerable hardest, they cut inner city councils more (mostly Labour run) than wealthy countryside areas. These cuts are not the fault of the people of Lambeth and we should not be made to pay for the financial crisis. Tax the rich to Save Our Services.

If Labour councils across England refused to implement the unnecessary cuts they disagree with then government would be forced to change its plan. Here in Lambeth, not only does the council refuse to protect its services with a bold anti-cuts budget, it also wastes huge amounts of money whilst cutting our services. 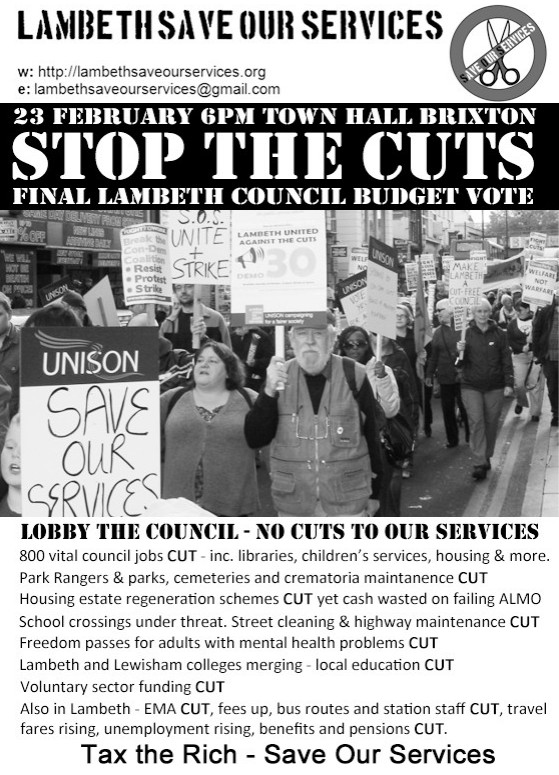 How to save money without cutting services in Lambeth

But most of all stop hiding behind police lines, security guards and consultation companies and join the people you are supposed to serve, in fighting these cuts.

What should you do?

COME TO THE PROTEST ON THE 23 FEBRUARY

Download the leaflet for the protest and send it to everyone you know. Tell people why this budget is wrong and why we have to protest on the 23rd.

Write to your councillor and tell them to fight the cuts and ask them why are they not saving money instead (see above).

Come to our regular open planning meetings, get involved and join the email list

Come to our Benefit gig to raise money for SOS

Affiliate you Trade Union branch or community group and give us money.