It’s taken me ruddy ages to get on to the new ‘crime and policing’ mapping service, police.uk, after the server was turned into a smouldering pile of metal after a stampede of curtain twitchers brought the service to its knees at its launch.

The site finally seems to be up and running now, so I’ve been taking a virtual peek around my manor to see where the ne’er do wells lurk. 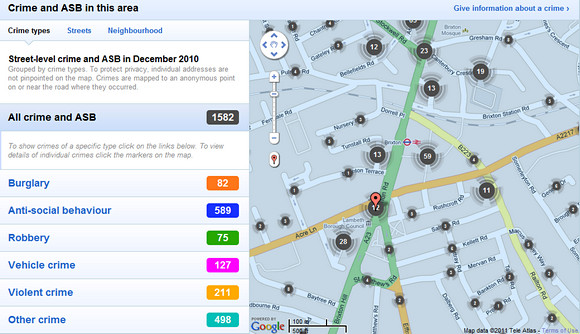 Predictably, Brixton has a far higher level of crime compared to many more affluent areas, with some notable hotspots like Astoria walk (by the Brixton Academy) and the junction of Electric Avenue and Electric Lane veritably glowing with crime stats. 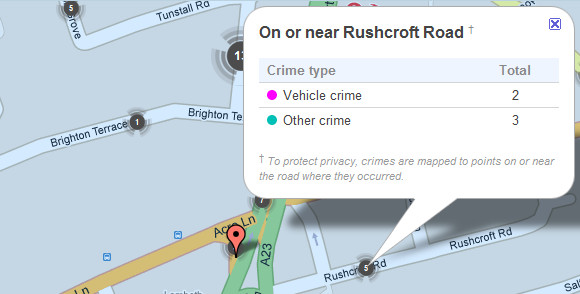 Reaction to the service

Most of the feedback about the the crime mapping site has been positive, although there’s been criticism about some of its inaccuracies, with The Sun letting rip under the heading, “Clueless”:

Crime-free streets were branded danger areas. Police call centres were listed as hotspots because so many crimes were reported there. Inevitably, the site collapsed as millions logged on. The map was an excellent idea let down by unreliable execution.
Without pinpoint accuracy, such an exercise loses much of its value. It spreads disinformation which can stigmatise decent neighbourhoods and blight property prices.

The Mirror was eve more scathing:

They should re-brand it comparethescumbag.com. Because it is nothing more than a Hyacinth Bucket Guide for middle-class curtain-twitchers. And what will it do for the law-abiding majority who live in the worst streets? Will it lead to a crusade to solve social problems that are the root of crime? No.”

The Guardian was more positive however, commenting:

When safeguards are in place, however, crime maps can be a useful resource for citizens and policymakers as well as for police. The report on the trialling of the new system showed that the public find the maps helpful and trustworthy. The claim that sharing information would raise fear levels was shown to be a myth, while the public’s involvement enabled many improvements to be made to the original proposal.