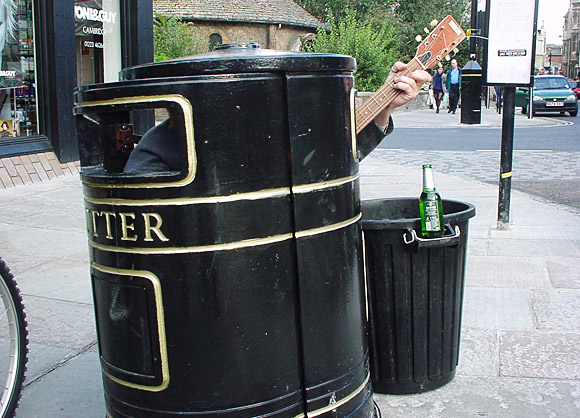 This guy did a great job of cheering me up after Cardiff City’s defeat at Cambridge earlier.

With busking, it’s all about getting noticed and hopefully getting a positive reaction from passers-by, and this guy certainly earned the coins I lobbed his way.

He’d positioned himself inside a street bin (that’s ‘trash can’ to your Americans) and was blasting out tunes with just the neck of his guitar jutting out.

The actual bin itself had been taken out and – as you can see – now serves as a handy beer bottle holder.

The photo was taken nearly nine years ago, but I hope the fella is still there, or someone else is continuing this curious tradition.

Busker in a bin update!

Thanks to posters on this thread, I’ve learnt that the guy’s name is Charlie, “he’s a bit of a local legend. He actually bought the bin for what is rumoured to be around £600 from the council. I think around two years ago someone took the bin and I don’t think he got it back.”

He’s still around too, so if you see him (perhaps with a borrowed bin, like a hermit crab) be sure to flip him some dosh.

One Comment on “Busker in a bin, Cambridge (updated)”