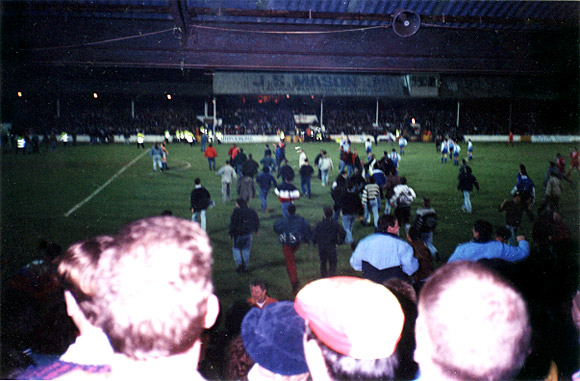 With Cardiff preparing for their third trip to Wembley in as many years, away trips like these seem a distant memory, but die hard City fans will have memories of many trips to the lesser known football outposts of the nation.

In this case, it was a Football League Two face-off in the south east of England, with Cardiff City travelling to Colchester United, on the 12th March 1993.

Being a night game, there was plenty of time for both sets of supporters to get tanked up, leading to a fairly lively atmosphere inside the ground.

There was a fair bit of noise in the ground, with Colchester’s squaddie following responding in kind to Cardiff’s taunts.

I can’t remember too much (on account of the aforementioned tanking up) but I seem to recall Cardiff going behind and then scoring dramatically, sparking off a good old fashioned pitch invasion with a load of Cardiff  ‘lads’ half heartedly ambling over in the direction of Colchester’s ‘boys’ before promptly returning to the terracing.

We eventually won the game 4-2. I think I may have missed out some of the details. I blame the Stella.

Updates! Thanks to posters on ccmb.co.uk and urban75, I’ve been reminded that it was a Friday night game and that the pitch invasion happened after we scored our third – putting us top of the league.

Some  Colchester fans got on the pitch as well and it turned a little spicy for a while, although it all handbags really.

Colchester’s players were taunted throughout with chants of ‘Tesco bag, Tesco bag!’ on account of their blue and white strip.