So after zero consultation with the fans, Cardiff City FC have declared that from henceforth we shall play in red, swiftly discarding over a hundred years of club tradition.

From now on, we will play in red because, apparently, red means that we’ll be wildly more popular in the Far East, although I’m still trying to work out how changing into a red strip magically boosts our foreign appeal to such an extent that it’s worth throwing out a hundred years of history.

As for me, I don’t give a fuck about our appeal the Far East or anywhere else. I don’t care if we’re bigger than Man Utd in far-flung places I’ve never even heard of. I’d rather be playing Newport County in the whatever-it’s-called-this-year league and feel like I’m actually still part of my team.

(Thanks are due to the anonymous artist for creating the new, improved version of the club badge below).

Discuss this news on the urban75 Cardiff City thread or scroll down for the ghastly press statement. 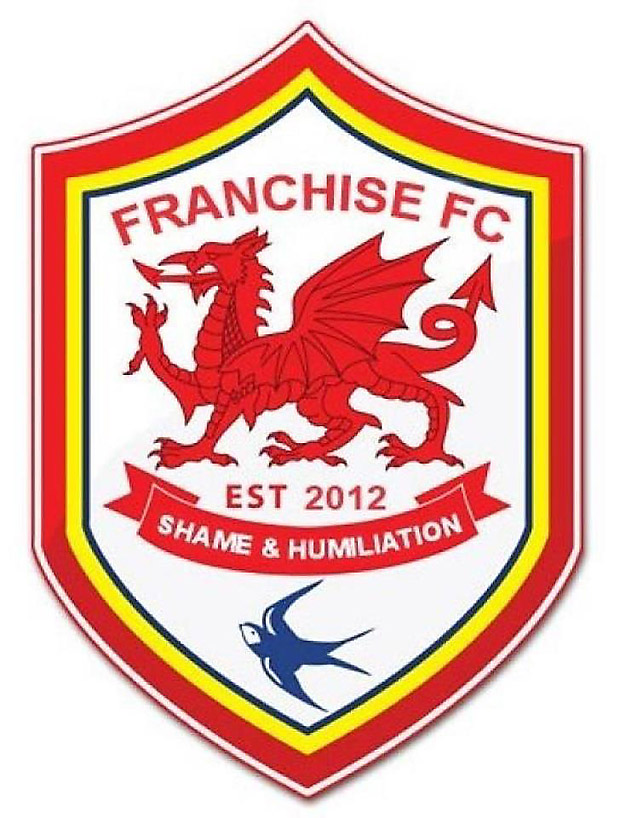 Here’s the full press statement from the club. It stinks.

On behalf of the board of directors and after constructive and positive discussions with our principal investors, Cardiff City Football Club are delighted to announce that Tan Sri Vincent Tan and Dato Chan Tien Ghee (“our Investors”) have pledged their continuing commitment to enable the club to plan for the future.

Following a comprehensive review of wider supporter feedback via email, letters, media coverage and polls run via the official Supporters Club and Media Wales and as a consequence of the above commitment, Cardiff City Football Club will also reactivate rebranding proposals with a view to exploiting and maximising its brand and commercial revenues in international markets, which it is hoped in turn will bring success to the club locally, whilst also attracting new partners and investors.

As part of this commitment, funds have been earmarked to finally resolve the historical Langston debt issue which for so long has cast a dark cloud over the club and its future. Negotiations have been continuing and a final offer has been made to those representing Langston and Sam Hammam which we believe is both fair and reasonable.

Whilst not yet concluded, we hope that both Langston and Sam will react positively and favourably to allow this long running and distracting saga to be finally closed which will be to everyone’s benefit. We know that Sam has always expressed his passion for this club and has said that he will always be a lifelong friend of Cardiff City. We hope that this sentiment will shine through accordingly and look forward to welcoming him at our ground as a guest of honour in the near future.

Subject to resolution of the Langston issue, work will also continue in earnest to improve the balance sheet by driving new revenue streams, attracting new investment and converting existing debt to equity. At the same time, plans will proceed in respect of the proposed new training ground and facilities, whilst feasibility studies will continue in respect of the expansion of the stadium at the appropriate juncture. Our Investors have also fully reaffirmed their support to enable Malky Mackay to strengthen his squad for the season ahead in line with the viable and prudent budgets agreed with him.
Of the news, Cardiff City Chief Executive Alan Whiteley said, “This is a major and significant financial commitment and we are grateful to our investors for their continued confidence in this football club. In recent years the support and commitment from our Malaysian investors has given the club a much needed stability that has allowed us to move forward and away from the brink of administration, whilst allowing the club to challenge at the highest levels of the Championship.

“It is proposed that the future investment will take place principally in the form of shares and should give us every chance of delivering what we believe is the common and collective objective of the board and all Cardiff City fans. Our goal, put simply, is to work towards concluding all previous financial issues to place us on a long term financially stable platform, along with introducing structured investment in the team, stadium and infrastructure of Cardiff City Football Club to enable the club to achieve and sustain Premier League football.

“Concerning the commitment to developing the crest and to switch our primary colour to red, as directors – and as fans in our own right – we recognise that there is a history and commitment that goes with supporting Cardiff City and we are conscious and proud of the loyalty, bond and passion so many share for this club.

“At the same time, we also have to be prepared to be realistic and progressive. Sometimes in difficult economic times and challenging market conditions, in order to attract investment to survive and progress, brave, bold and compelling decisions and sacrifices need to be taken and made. By securing this investment we can safeguard the immediate and long term future of this club.

“The changes to the home kit and badge introduced as a consequence of the investment package are designed to help the club to develop its brand and to allow it to expand its appeal to as wide an audience as possible, with a view to delivering local success via an international and diverse market. As a board, we believe these changes, in the light of the benefits that will be demonstrably delivered, have been or will be accepted by the vast majority of supporters as judged in the light of the numerous emails and letters of support, backed by recent poll results from the Supporters Club and Media Wales.

“We are only too aware that the change of colour is a radical and some would say revolutionary move which will be met with unease and apprehension by a number of supporters, along with being seen as controversial by many. To those I would like to say that this was not a decision that has been taken lightly or without a great deal of thought and debate. There is no getting away from the fact that history and traditions are the lifeblood of any club and as such should be jealously guarded and preserved. Both the board and our investors fully understand and respect this and will do their utmost to uphold, protect and promote the values and virtues which the club stands for.

“However, the changes are believed to be vital to enable the club to progress to the next stage in its development and very much in the club’s best long term interests. Judged in the context of the overall commitment and financial support, we believe it is the right decision for this club and where it currently stands. We hope that all supporters will appreciate these sentiments and will embrace the changes in that spirit and continue to support the club in the same loyal and passionate manner as before but hopefully with some greater feeling of security. ”
Speaking of the proposals, Cardiff City Chairman Dato’ Chan Tien Ghee said, “I am delighted we have been able to finalise this further investment which subject to final resolution of the thorny Langston issue, should promise exciting times ahead for Cardiff City. I am very grateful in particular to Tan Sri Vincent Tan for making this possible and for his continued commitment and support.

“I know and understand that there have been reservations in certain quarters over the changes accompanying the investment, but sincerely hope that all of our loyal fans will come to accept the changes in the spirit in which they are made and continue with their passionate and fantastic support.

“This club will always be Cardiff City Football Club and its name and heart will never change nor are any of the changes meant to destroy any part of its history or culture.

“The adoption of the new badge incorporating the proud symbol of the Welsh dragon, which was the symbol on the club’s badge on the only occasion the FA cup left England with the iconic bluebird and the new red home strip very proudly places Cardiff as the capital city of Wales, whilst also recognising its history and creates a symbolic fusion with Asia which will allow us to fly the Welsh flag on behalf of Cardiff wherever we go.”
On hearing of the finalisation of the investment plans, manager Malky Mackay commented,” It’s great news that Tan Sri Vincent Tan and our chairman Dato Chan Tien Ghee have reaffirmed their commitment and investment which will allow us to take forward the exciting plans for the future of this football club which we have all been working towards. It is a testament to their vision for what this club can become and achieve.

“Since coming to Cardiff, I have been hugely impressed with the commitment and passion of the fans here. The securing of this package of investment and the breadth of vision which it encompasses should enable us to build on the progress already made in my first year and puts us in a position to take Cardiff City forward in the way which the fans deserve.”
As a club, we feel that this is a historic moment in our history and whilst some of the plans are radical, this course of action will give us the security and long term backing to enable us to look forward to the future with confidence and excitement. We will all work together to implement this strategy to deliver the ultimate goal of seeing our team compete as a long term fixture in the Premier League.

The prospect of Cardiff City Football Club eventually operating on a debt free basis and with further investment to improve all aspects of our club is a turning point in its history and a moment we have all been waiting for. As a result of the investment to be made, all associated with Cardiff City Football Club can look to the future with renewed vigour and be proud to represent the capital city of Wales.

Corporate branding and Cardiff City FC. So what are we called now?