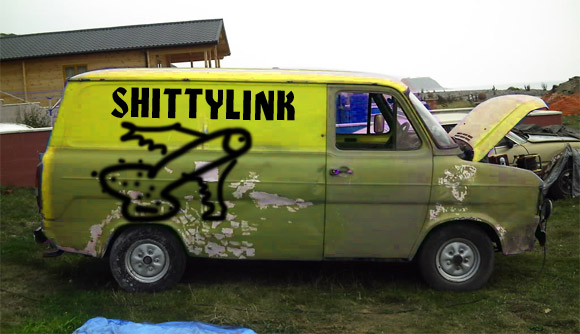 When a big company screws up and attracts negative criticism, the smart thing to do is to reach out to their customers, apologise and offer to make things right.

But that’s not how Citylink – recently described as the “most embarrassingly unprofessional company imaginable”  – like to do things.

Instead, they like to try and bully negative comments off the web by way of dubious legal threats and bizarre claims.

Some time ago, I ran a piece venting about the astonishingly dire service I received from Citylink, who remain the worst couriers I have ever had the misfortune to use.

The piece, written way back in 2008, documented my unhappy dealings with the company, and proved rather popular with readers, notching up thousands of page views. A companion thread on the busy urban75 forums also found no shortage of equally disgruntled Citylink customers.

Although Citylink managed to piss me off again with more stunning incompetence in June 2011, I’d pretty much forgotten about the original article until I received this threatening email yesterday, entitled:

INTENT OF NOTICE FOR LEGAL PROCEEDINGS – DO NOT IGNORE THIS EMAIL

It seemed that Citylink had suddenly decided to object to the small (425 pixels wide) image I’d used to illustrate my blog article, which was a press photo of one of their vans with the logo altered to read “Shittylink.”

A little childish, I grant you, but it certainly reflected my anger with the company.

Because a tiny logo could still be spotted in the image, Citylink insisted that it represented an, “infringement of our registered and common law rights,” but then went deep into the realms of fantasy:

It has come to our attention that you have published material containing
the Flying C trademark and the intellectual property namely copying our
entire website ON http://www.urban75.org/blog/citylink-couriers-useless-lying-wankers/.

I’m not sure how using this one small image added up to ‘copying an entire website’, but Citylink went on to demand that I:

1. cease all use of the trademark Flying C logo and entire website encompassing our intellectual property;

3. undertake, in writing, never in future to make any use of the Flying
C trademark and entire website encompassing our intellectual property without
prior written authority from us, whether within any corporate name, trading
name, trading style, domain name or otherwise;

4. compensate us for our legal costs incurred in this matter which
amount to £500 upon failure of complying with this notice.

Now, some of you may think that Citylink’s time would be spent more wisely apologising to their irate customers and trying to improve their lamentable reputation, but it seems that threatening bloggers over  three-year old posts is more their style. 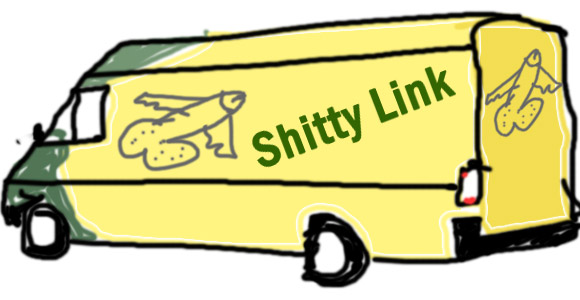 Even though there is a very strong case that my use of their press image represented ‘fair use,’  I immediately removed it and replaced it with my own picture of a similar delivery vehicle, this time replacing the ‘Flying C’ logo with a rather splendid flying cock (see above for a more artistic take on it).

Keen not to suffer their randomly totted-up ‘compensation costs’, I took legal advice before swiftly sending them a considered response to their threats:

Thank you for your message.

Although your claim of the “Widespread use of the Flying ‘C’ trade mark”
is clearly a wild exaggeration (there was only one small illustration
with the logo just 140 pixels across), I’m sure you’ll be pleased to
learn that the image of one of your legendarily speedy vehicles has
been immediately removed, as requested.

This did leave me with the problem of having to find a new
illustration for the article about your company’s dreadful service, so
I’m sure you’ll be delighted with the new image showing a battered
yellow transit van, circa 1982, with a big flying cock on the side.

Please be sure to contact me at your earliest convenience if you
believe this new – and, frankly, rather improved – image breaches your
copyright in any imaginable way.

I am rather intrigued by your bizarre claim that I was “copying your
entire website.” Unless your entire website comprises of a single
image you have become as confused as one of your legendarily wayward
drivers.

I’m also mystified as to how I’m supposed to “deliver up the image for
destruction”. The disputed image was your own press photo with an
amusing caption added, so I don’t own it, and you certainly have no
claim to my text.

However, if you’d like to mail me the original photo file on a hard
drive, I’d be happy to smash it into a thousand pieces on your behalf.

Finally, I’m happy to pledge to never to use any Citylink images
again, although, sadly, it’s highly unlikely that I won’t feel
compelled to write about your incompetent service again in the future.

In fact, I can feel a new article coming on now. Oh, yes.

PS Have you ever heard of a phenomenon known as the ‘Streisand Effect’? 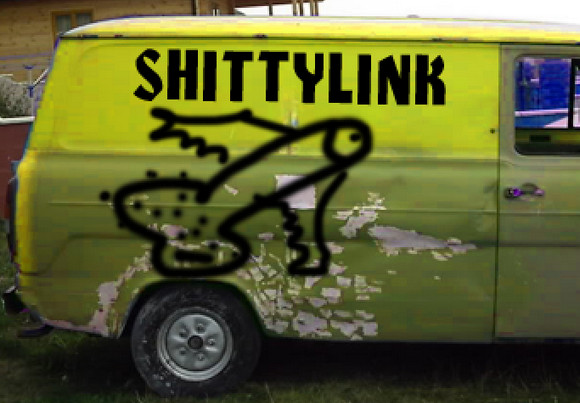 The Streisand Effect happens when a wealthy company or individual tries to use legal means to hide or remove a piece of online information that they don’t like – but in doing so, they only end up publicising the information more widely.

It is named after the American entertainer Barbra Streisand, whose doomed attempts to suppress photographs of her residence in 2003 had the exact reverse effect [Streisand effect].

With luck, I’m hoping that this is exactly what Citylink will now suffer, because after Ol’ Timmy’s attempts to bully me with his nutjob claims about ‘copying their entire website,’ I’m going to express my dissatisfaction with his company TWICE AS LOUDLY AS BEFORE. 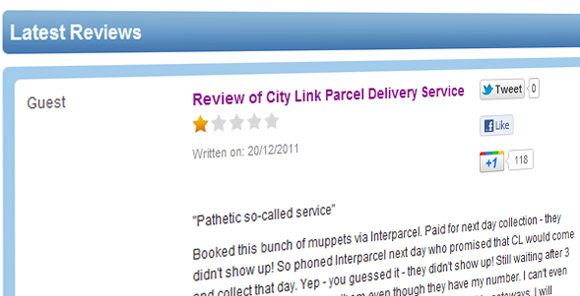 Citylink: universally derided as being crap

It’s not just me who had had a nightmare experience with Citylink – just look what their online users say.

The Review Centre has received no less than 1,299 reviews of City Link’s delivery service and they’re almost all bad, with  the most recent reviews commenting:

Yes, they really are terrible

Another reviews site, TrustPilot contains over 570 reviews, and once again, they’re overwhelmingly negative, with Citylink only managing a lamentable overall score of 1.9/10 for service.

The most recent reviews on the front page come with the damning titles: “Disgusting service,” “Appallingly bad service,” “4 attempted deliveries and none of them to the right address – still waiting,” and “Shockingly unprofessional ‘company’.” 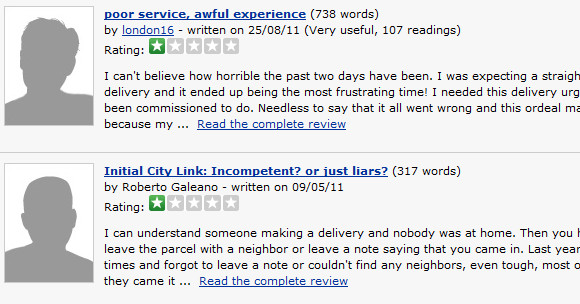 The popular dooyoo site also has a lengthy discussion thread about Citylink’s service and – as you may have guessed – it’s full of user complaints and people deeply dissatisfied with their service.

As for me, I’ll never use Citylink again if I can help it, and I will always explain to online vendors why I don’t want them to send their goods with the company.

I’m also hoping that by sharing this, others will get a good idea of what they can expect with Citylink and make a more informed choice when choosing a courier for an important delivery.

Citylink, now owned by Rentokil Initial,  reported revenues of £335.5 million last year and were happy to sign a three year deal with Colonel Gaddafi in 2009. Nice.

31 Comments on “Clueless, crappy Citylink accuse me of copying their “entire site” in bonkers legal claim”