Billed as the UK’s largest ever exhibition of mainstream and underground comics, Comics Unmasked tracks the British comics tradition back from modern works to 19th-century illustrated reports of Jack the Ripper and earlier. 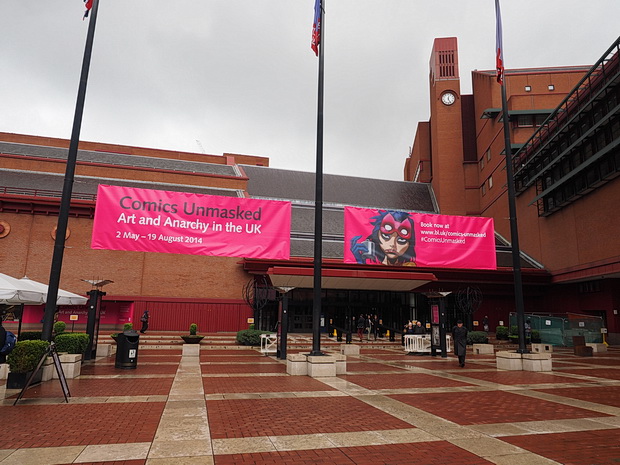 The show at the British Library investigates the creative process, with original scripts, preparatory sketches and final artwork – some of them instantly recognisable.

Covering the work of the earliest earliest pioneers to today’s digital innovators, this is a great insight into the subversive world of comics.

It’s a fascinating exhibition and a must-see for comic fans and for anyone with an interest in British art, social history and subversion. 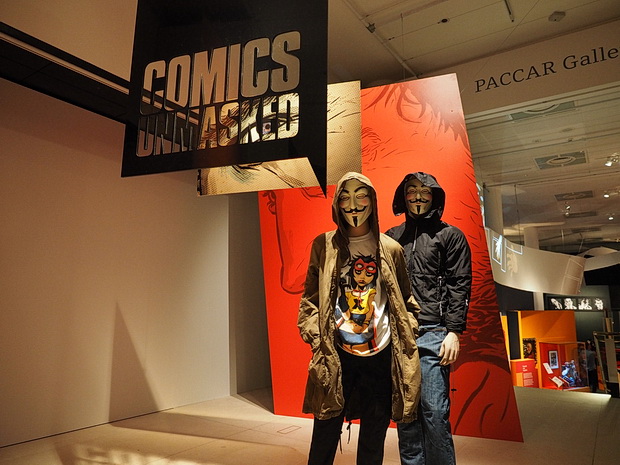 In a press release, John Harris Dunning spoke of the aims of the exhibition:

We hope that this show will stimulate creative disobedience and throw down the gauntlet to young creators – as well as show audiences, who perhaps have not read comics before, what a diverse and exciting medium they are.

The demystification of the process of creating comics is a key part of this exhibition, with once in a lifetime opportunities to see original artwork and scripts from comics greats. 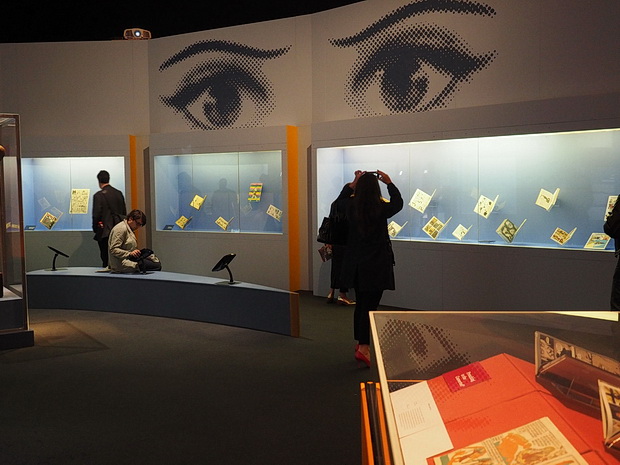 Much more than childhood nostalgia, comics are a powerful adult medium which can reflect and impact on society and change’s people minds and lives.

From the very start, comics have been cross-pollinating with movies, music, theatre and all the other media and today are on the cutting-edge of digital storytelling and multi-media installation art. 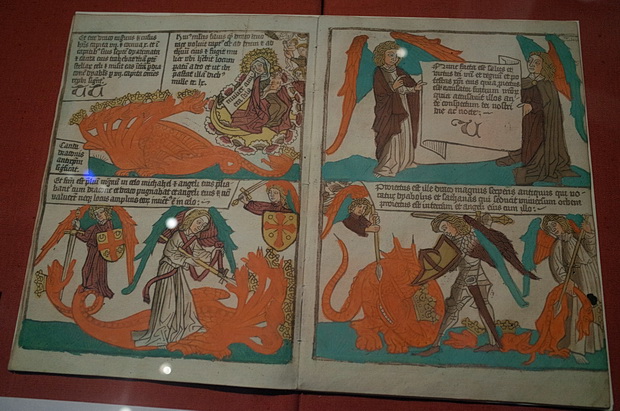 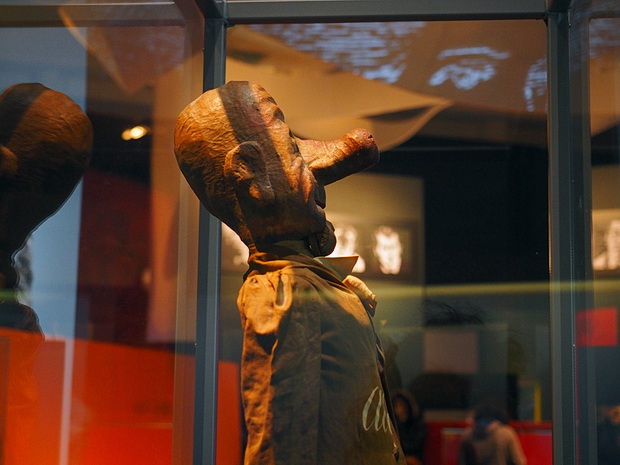 Ventriloquist’s dummy of Ally Sloper, one of the earliest fictional comic strip characters dating back to 1867. 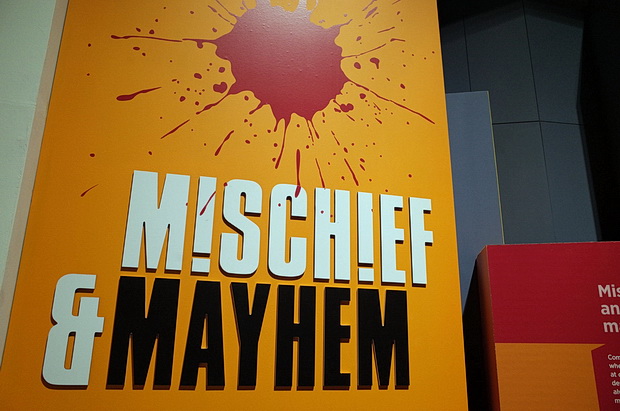 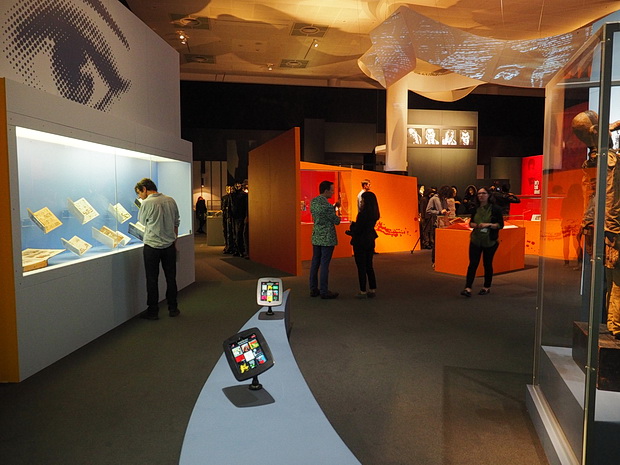 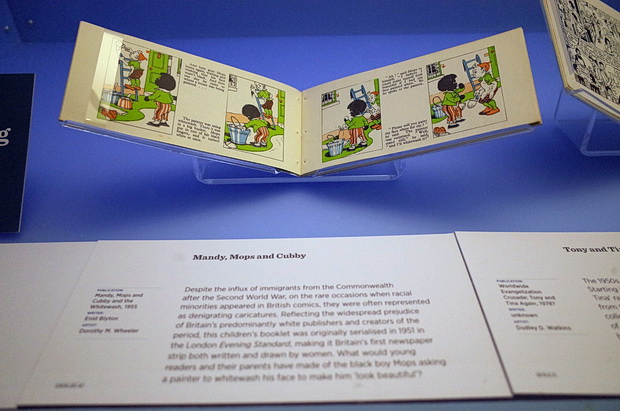 Some of the work is painful to view, like this horrendously racist strip from ‘Mandy, Mops and Cubby’ showing a young black boy asking a painter to whitewash his face so he could “look beautiful.”

Serialised in the Evening Standard from 1951, this children’s booklet was Britain’s first newspaper strip both written and drawn by women (Enid Blyton and Dorothy M Wheeler, respectively). 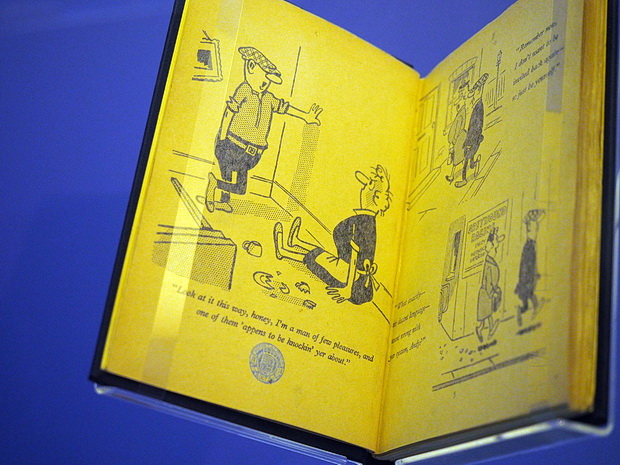 Perhaps even more shocking was this 1958 strip from the hugely popular Andy Capp series which seems to celebrate domestic violence.

“Look at this way, honey,” says the cloth capped Capp standing over his beaten wife, ” I’m a man of few pleasures, and one of them ‘appens to be knocking yer about.” 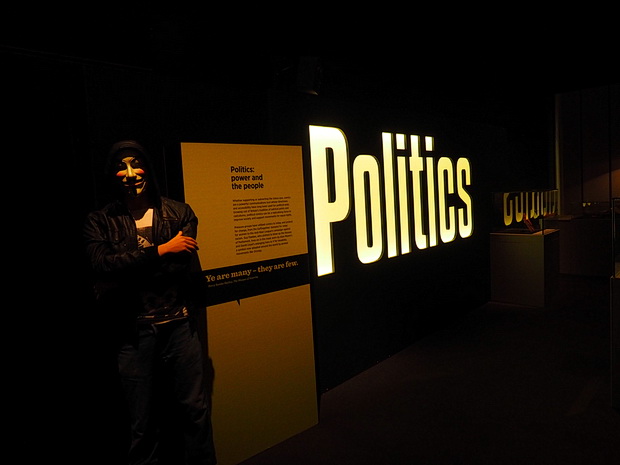 The exhibition explores comics and graphic novels which unflinchingly address and challenge important themes such as sex, violence, race and drugs, as well as seeking out the inspiration and context behind them. 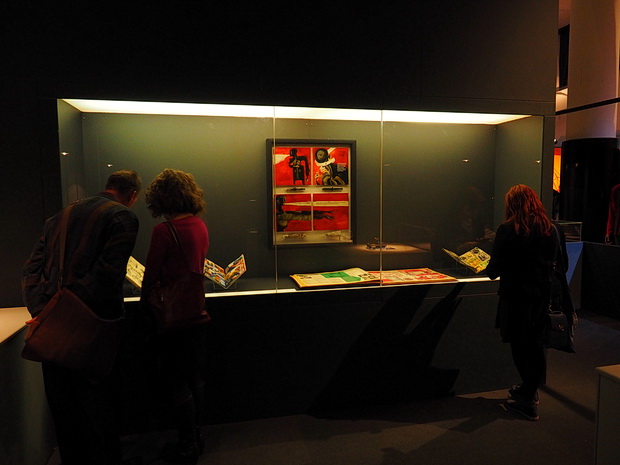 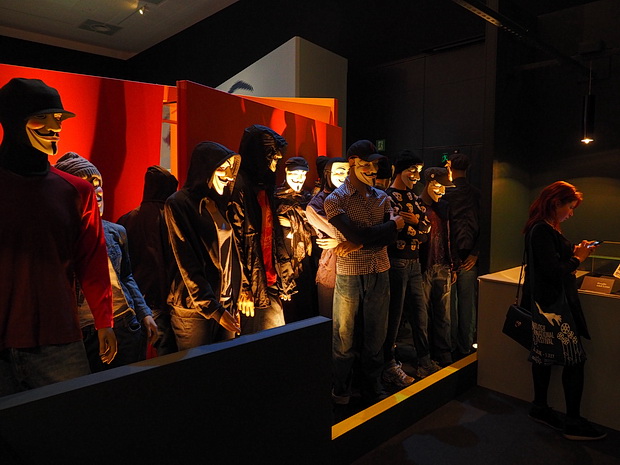 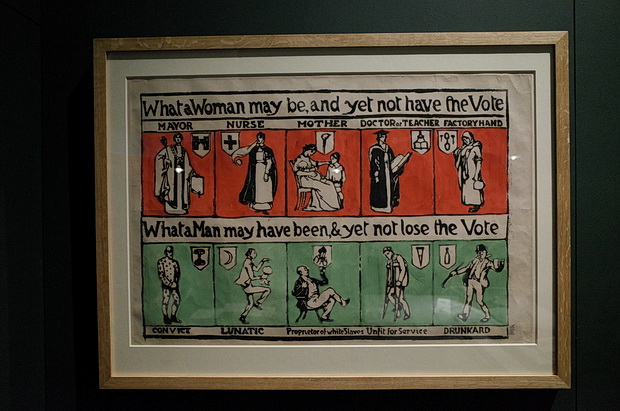 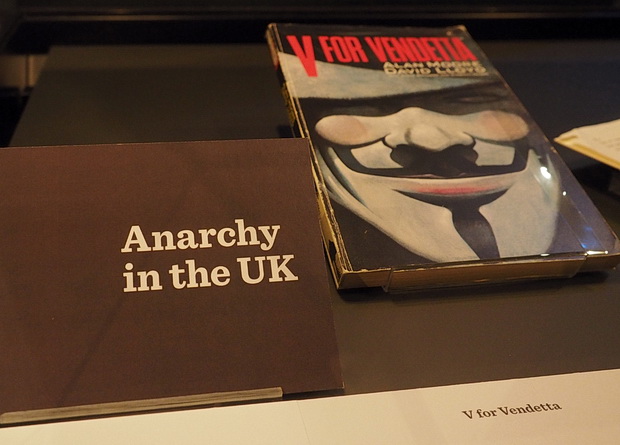 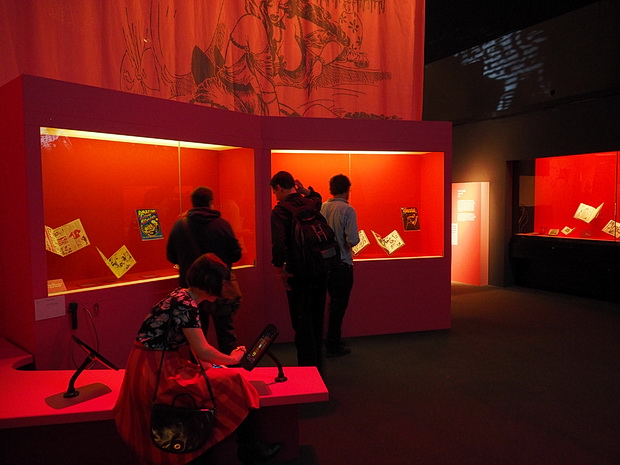 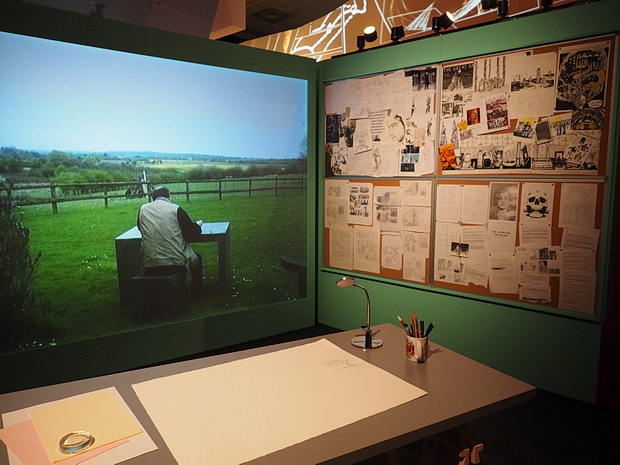 The Library recorded a day in the life of four important comic book artists as they work in their studios, including Isabel Greenberg and Posy Simmonds, which appear as life size projections. 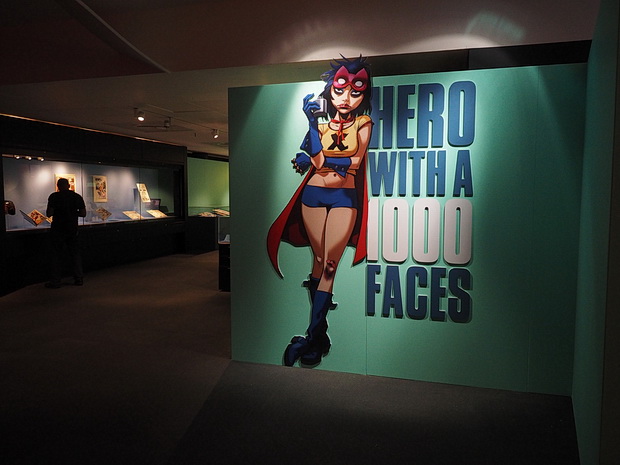 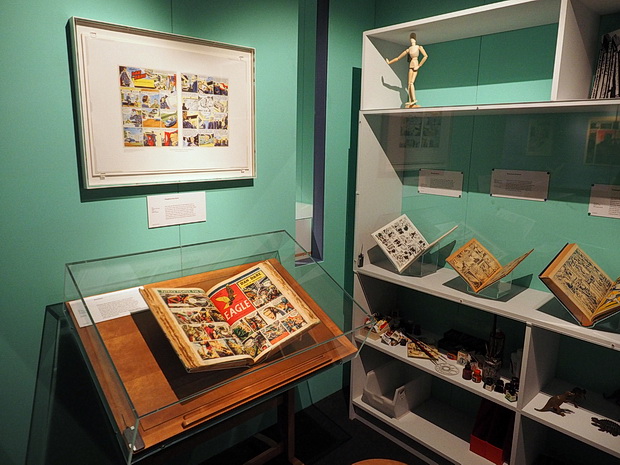 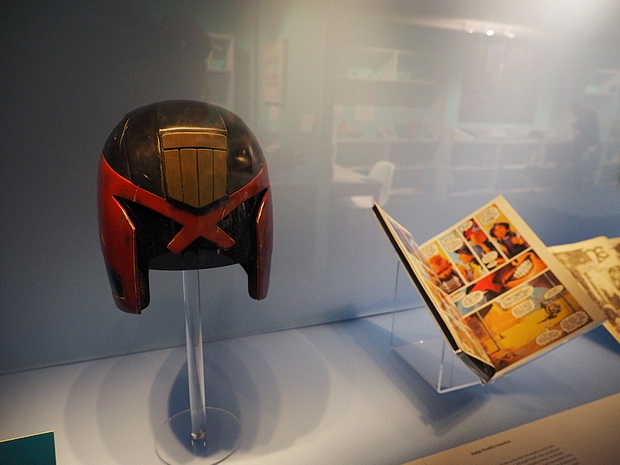 Judge Dredd’s helmet from the film adaptation of the 2000AD Judge Dredd series. The less said about that, the better. 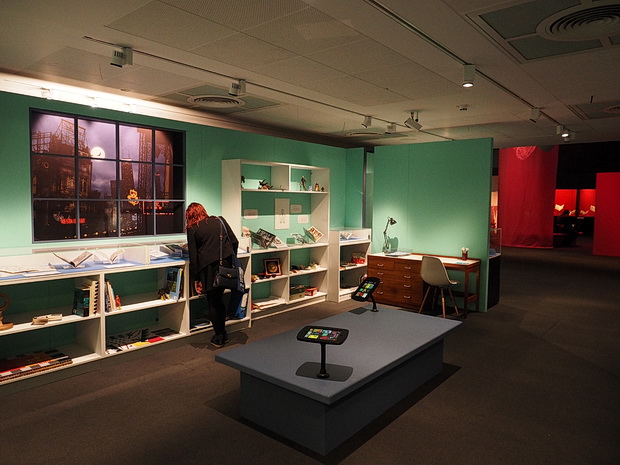 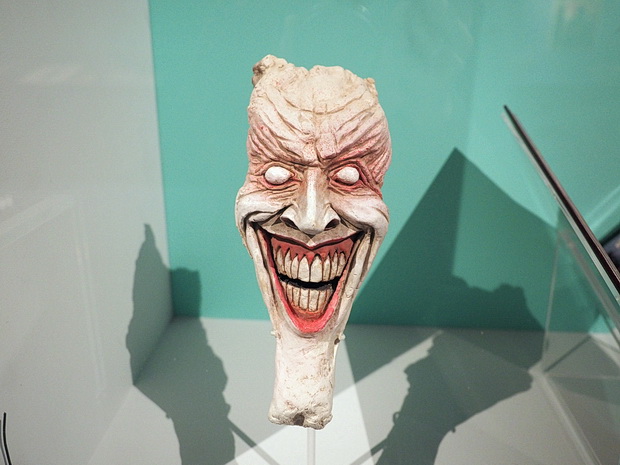 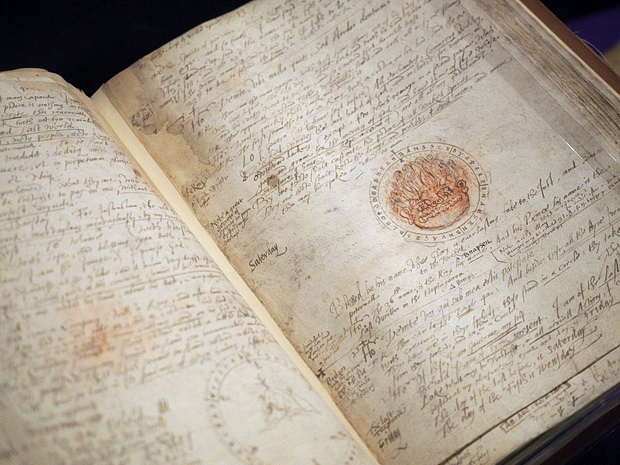 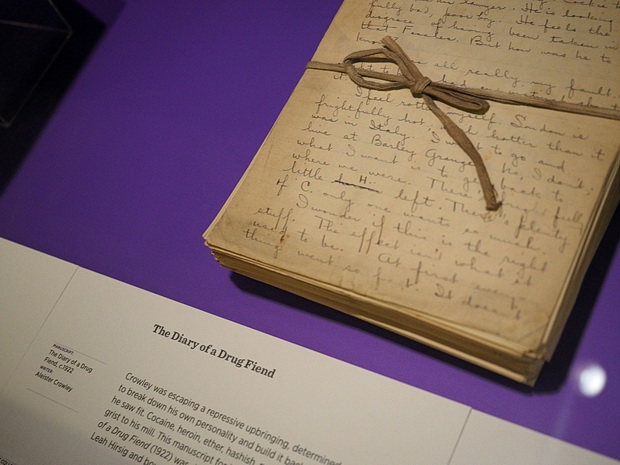 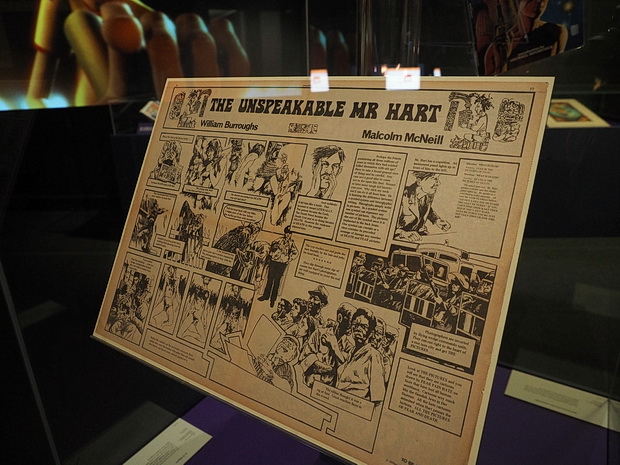 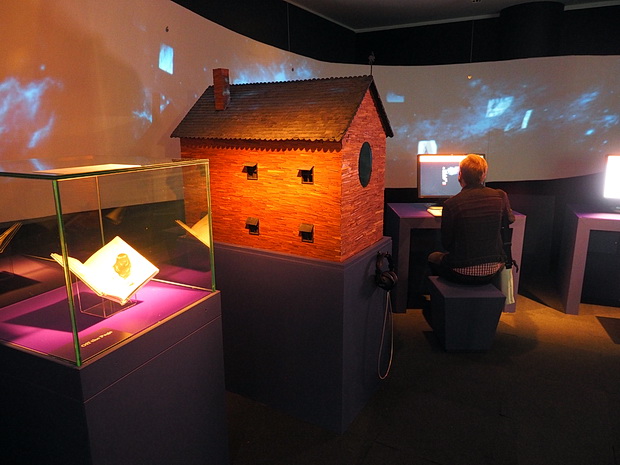 The exhibition runs until 19th August 2014 with tickets issued with timed entry slots. Admission charges are £9.50 for adults, with concessions available. Click here for ticket info.

One Comment on “Comics Unmasked, Art and Anarchy in the UK exhibition at the British Library, London”