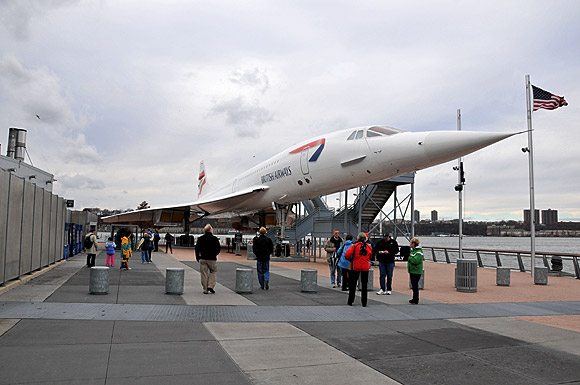 Standing rather forlornly on a barge at the end of a Manhattan jetty on New York’s west side is retired British Airways Concorde aircraft, number G-BOAD. 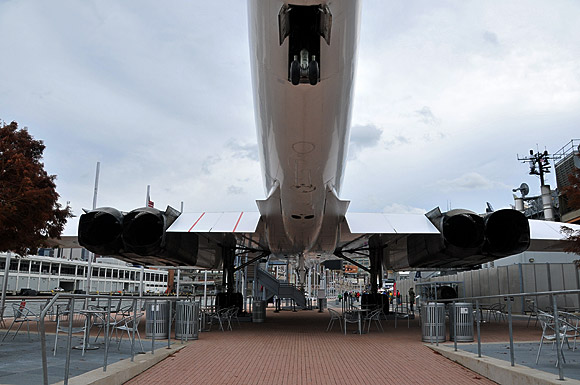 Although it’s unlikely to ever fly again, this is the plane that set a world speed record for passenger airliners on February 7, 1996, when it hurtled from New York to London in just 2 hours, 52 minutes and 59 seconds. 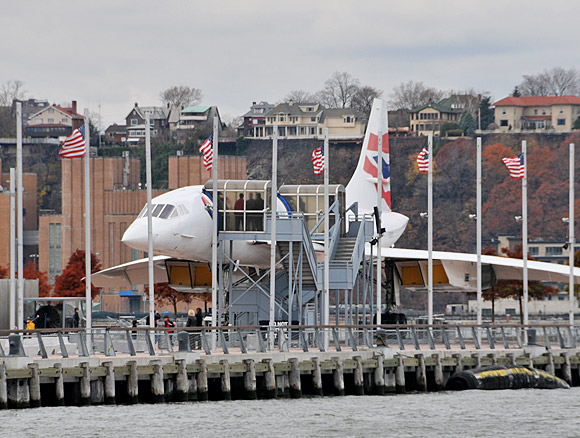 Concorde carried over 2.5 million passengers at supersonic speeds from 1976 until making  its last commercial flight from New York to London on 24 October, 2003. 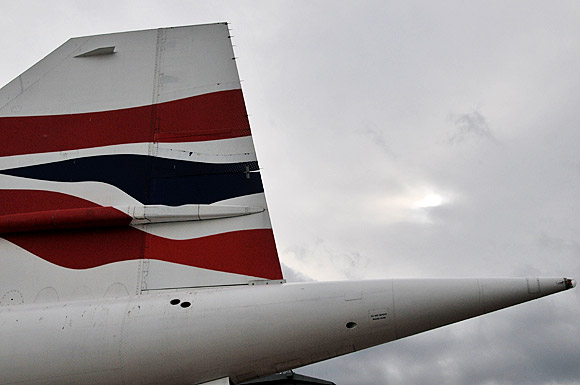 As I’ve said before, there’s a lot of reasons why I should hate Concorde – it was, after all, a gas guzzling plaything for the rich and powerful – but I’ve always been won over by its sheer elegance, futuristic lines and incredible engineering achievement. 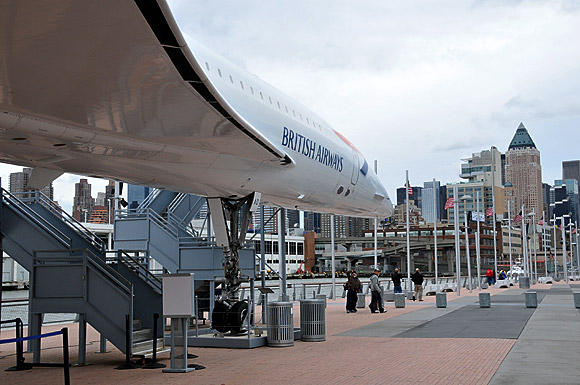 According to the official Concorde site, the plane measured 204ft in length but – and this is the amazing bit – the plane stretched between six and ten inches further in-flight due to the heating of the airframe.

To stop all the paint peeling off , the clever clogs techie folks created a special white paint that was super flexible. 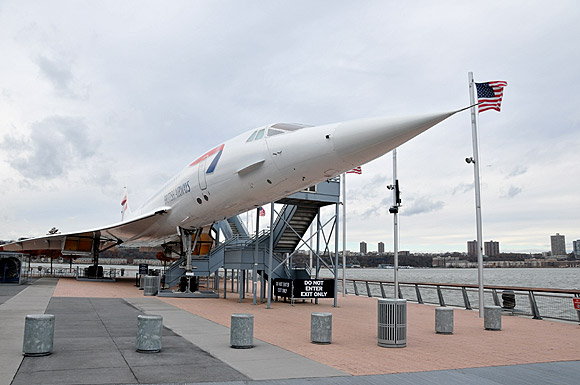 When you see it in the flesh it’s quite surprising how small it seems. 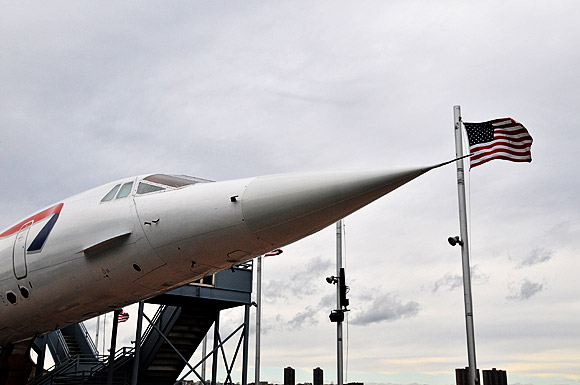 Concorde took off at a much faster speed than regular subsonic planes (220 knots/250mph compared to 165 knots ) and cruised at around 1350mph – more than twice the speed of sound.

London to New York used to take just under three and a half hours as opposed to the eight hours or so you can expect in a ‘modern’ aircraft nowadays.

Sadly, I never got to fly in Concorde, and I guess I never will. 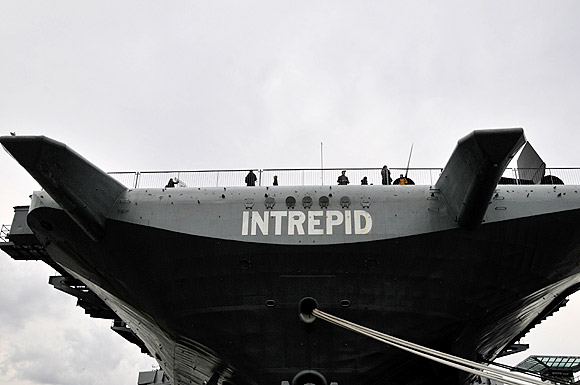 Concorde is one of the main exhibits at the  Intrepid Sea-Air-Space Museum on Pier 86 at W46th/12th Ave.

The museum covers military and maritime history museum, based around the World War II aircraft carrier USS Intrepid, with the collection including the submarine USS Growler and a Lockheed A-12 supersonic reconnaissance plane. 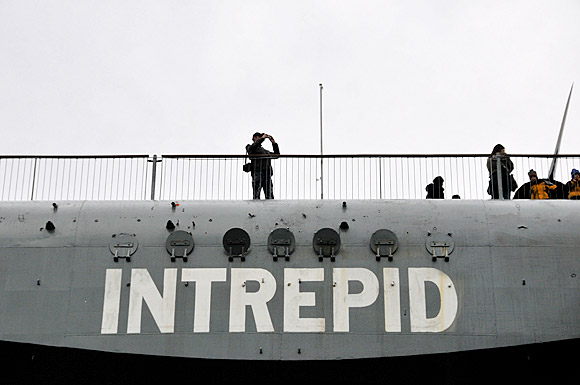 Pricey – but free to walk about

There’s a hefty admission price to get into the museum, but there is an option to walk around the site and along the jetty for free.

They don’t seem so keen on letting you do that, so you have to enter via the main paying gate, go through the security checks and then tell them that you’re a cheapskate and don’t want to pay.

Seeing as Americans have been visiting our museums for free for years, we had no qualms about doing just that, although no admission paid = no look inside Concorde. The rotters! 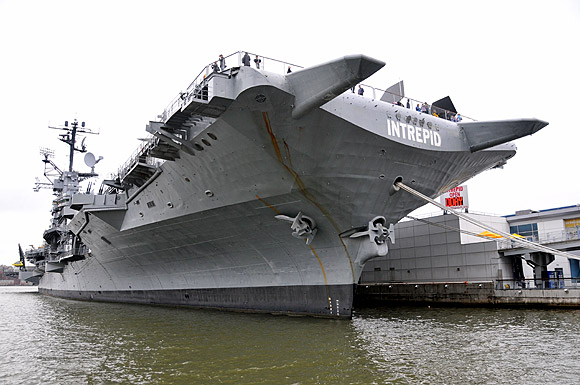 The museum opened in 1982 after USS Intrepid was saved from the scrap heap in 1978. The ship was designated a National Historic Landmark in 1986. 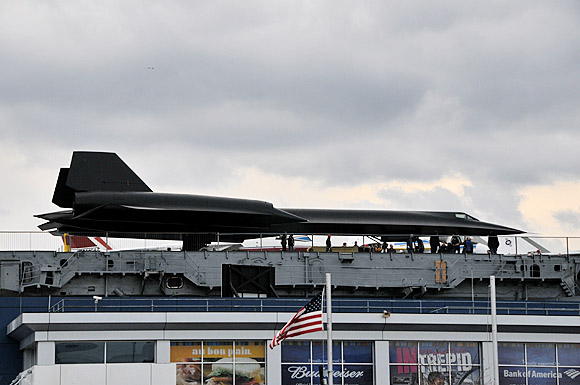 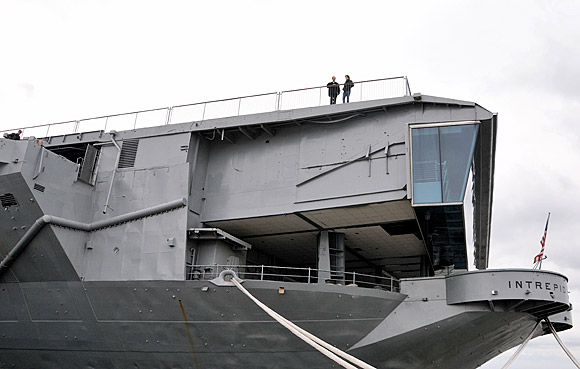 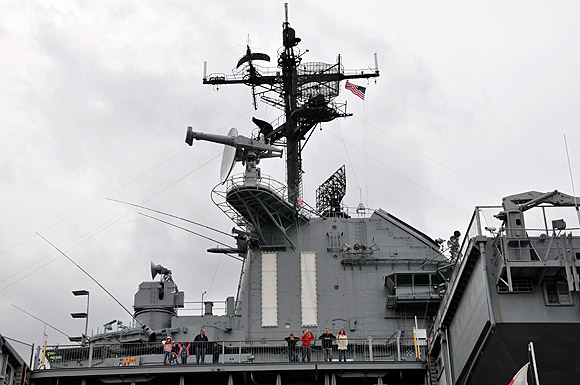 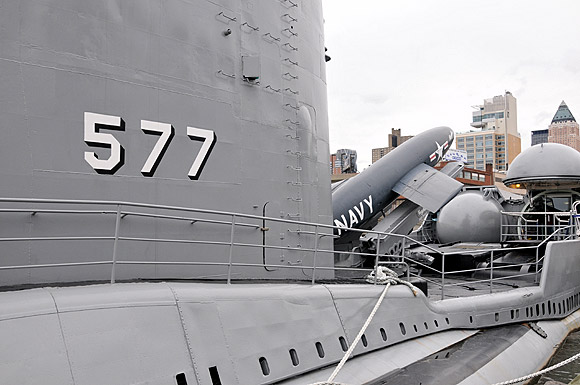 That’s a cruise missile sticking out of the sub!

Goodbye to the Intrepid Fox, London

3 Comments on “Concorde at the Intrepid Museum, NYC”