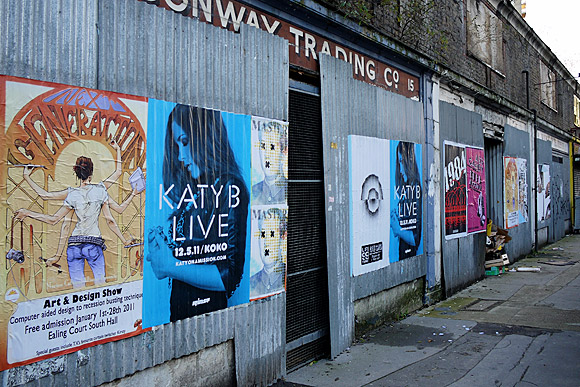 Looking unlikely to ever come back from the dead is this block of derelict shops along the east side of Toynbee Street in the Spitalfields district of east London, E1. 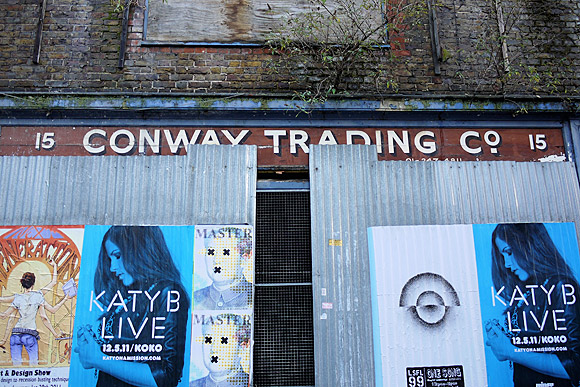 At number 15 is the boarded up shop front of Conway Trading Company, with an old hand-painted sign above. The shop has been closed for several years. 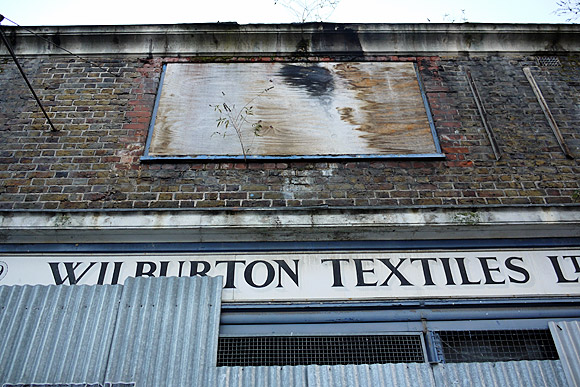 Wilburton Textiles used to operate from Number 19. The area was famous for its textile trade. 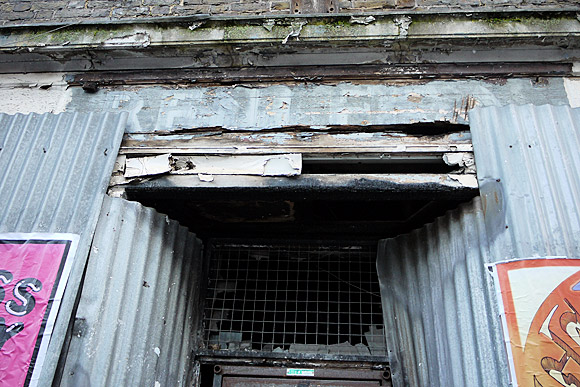 Derelict and long abandoned shop at number 17, Toynbee Street, with the old doorway in a poor state of repair. 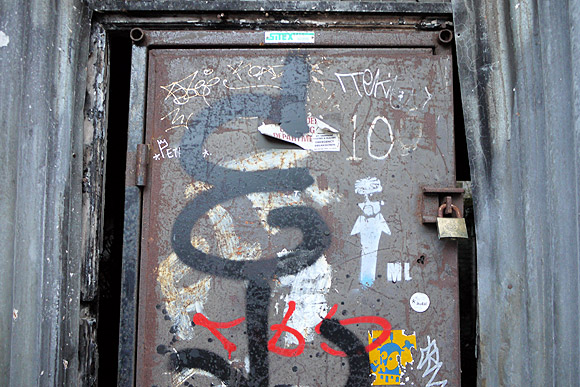 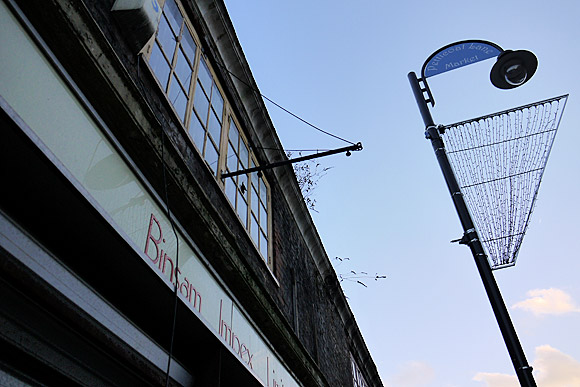 To the left (out of view) is a general store carrying the snappy name, “New Continental Food Stores Groceries Halal Meat 21-23.”

It’s shown as still being open in Google Street View, but the graffiti-covered shutters were down when we went past, and it looked as run down as the other shops. 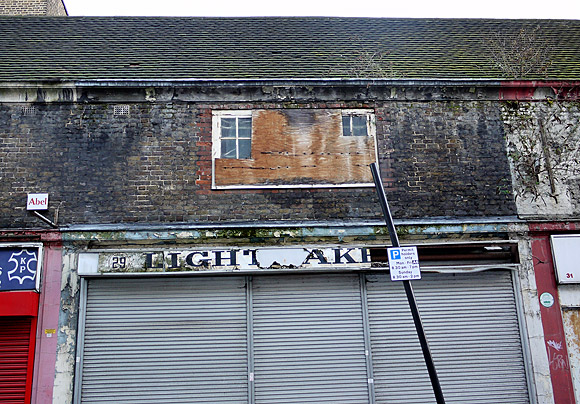 The remains of the slowly disintegrating ‘Lightmake’ sign at number 29. Most of the upstairs room windows were boarded up along the row. 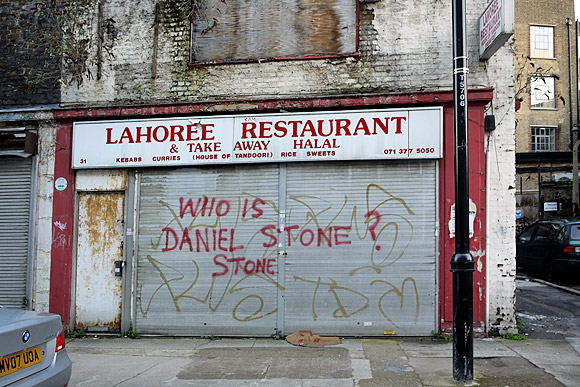 The peeling frontage of the Lahoree Restaurant is in such a dreadful state, I sincerely hope the takeaway isn’t still serving food.

I’ve no idea who Daniel Stone is, and aren’t really that bothered to find out, thanks. 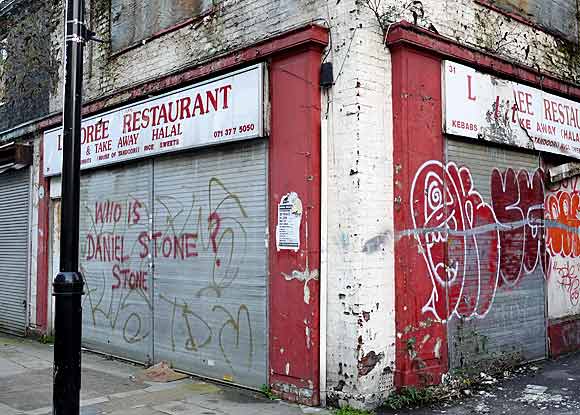 The restaurant exterior is in a shocking state. 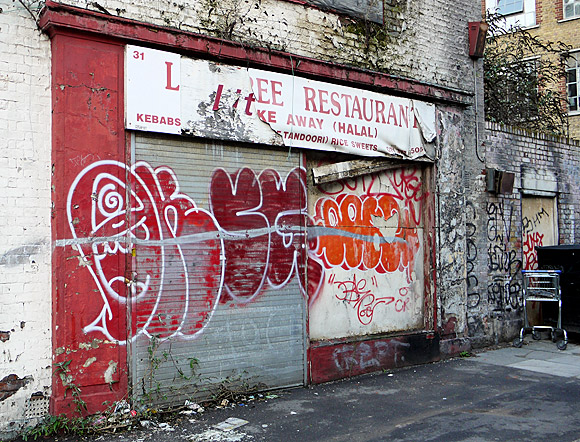 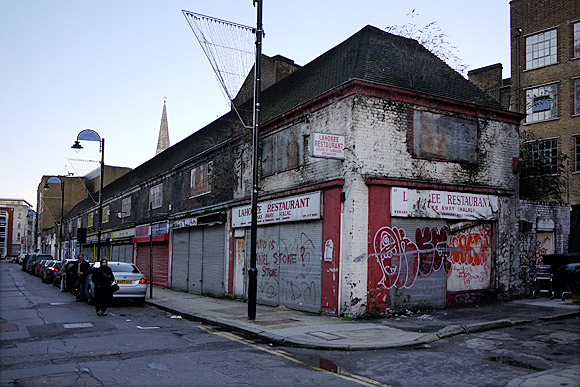 General view of the row of shops looking north.

Considering the generally dismal condition of these buildings, I can only assume that they’ve been earmarked for demolition (with the inevitable luxury ‘lifestyle’ flats to follow), but does anyone know for sure?

Thans to a poster on the [bulletin boards]I have learnt that the road used to be called Shepherd Street and is marked as such on the Booth Poverty Map of 1898-99, which classifies the households along it as ‘Mixed, some comfortable, others poor’. 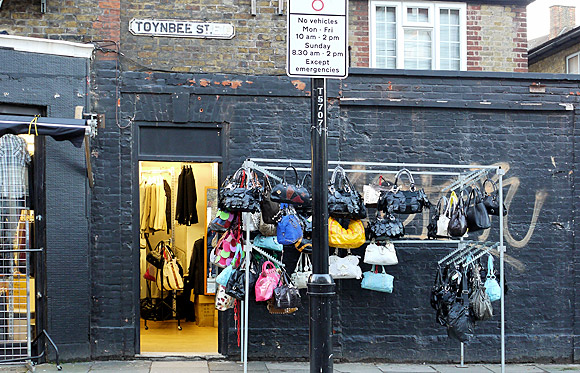 There’s still some trading taking place on Toynbee Street – here’s a shop on the opposite side of the street.

[Discuss this article on our bulletin boards]

The mystery of the Toynbee Tiles in Philadelphia – and Planet Jupiter

The Hobbit newsagent on Wardour Street reveals its 1970s frontage