Ahead of the World Cup in Brazil, this fantastic monologue from John Oliver tears into the hugely dubious practices of FIFA (Fédération Internationale de Football Association), the international governing body of association football. 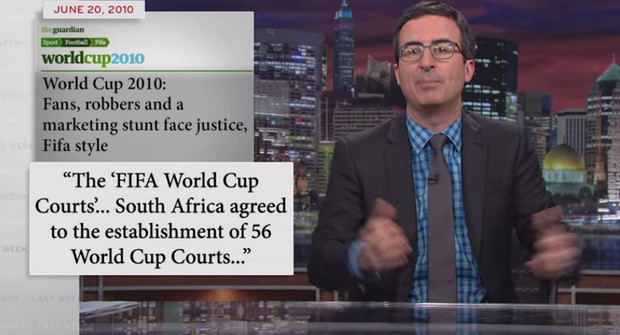 Screened on Sunday’s episode of HBO’s ‘Last Week with John Oliver’ in the US, the British comedian rips into FIFA, a tax-exempt  ‘not for profit’ organisation with a billion dollars in the bank, and one that commissions big budget films about itself.

In an exocet-accurate 13 minute rant, Oliver lays bare the insanity of FIFA being able to change the laws of countries hosting the World Cup, the dodgy bribery claims, the deaths of stadium construction workers, the human rights abuses and the sheer insanity of awarding Qatar the tournament at a time of year when temperatures can reach 50 degrees Celsius.

You are hosting the World Cup somewhere where soccer cannot physically be played. That’s like if the NFL chose to host the Super Bowl in a lake.”

There are now allegations that some FIFA executives took bribes to put the World Cup in Qatar. And I hope that’s true, because otherwise it makes literally no sense.

It’s a brilliant, essential read for anyone interested in football. View it below:

The sound of the World Cup….