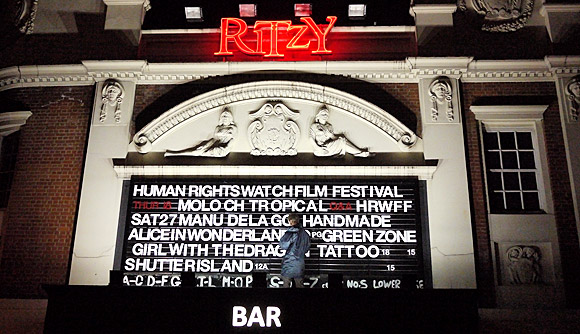 Today is the 100th birthday of The Ritzy, and if you get down there quick they’re marking the occasion with a special screening celebrating the birth of cinema and the era of the silent film.

Originally known as the Electric Pavilion, it was built by E. C. Homer and Lucas for Israel Davis, one of a noted family of cinema developers.

The cinema was one of England’s earliest purpose built cinemas seating over 750 seats in the single auditorium, while before its renovation it was a great place to get drunk, smoke a spliff and watch some films!

Ritzy cinema ‘Then and Now’ photos.

Rockabilly at the Brixton Ritzy

The genius design of the outdoor Brixton Ritzy ticket queue

No Frills Band at the Ritzy, experimental film music at the Albert, Brixton

What a hangover! Drinking at the Ritzy