I finally managed to get a refund on my 5 month old Sony DSC f88 digital camera, which had proved to be a bitter disappointment.

I’ve been using various versions of these small, swivelling super Sony marvels for many years, but this one proved to be a duff one, suffering from horrendous ‘blooming’ (white light bleeding into the picture form the corners) and a moody shutter release that would sometimes decide to have long moments of quiet contemplation before taking the bloody picture!

After much faxing (note to readers: if you want something done, send a fax: the technology may be ancient, but it works!), Micro Anvika generously refunded the cost of my camera and I replaced it with the super-sleek new Sony DSC V3 – a semi-pro, 7 megapixel digicam that has picked up rave reviews from the likes of dpreview.com 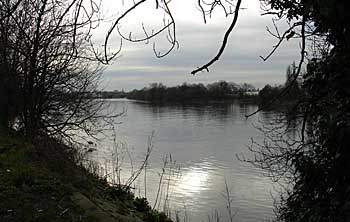 I had the chance to try out my shiny new purchase the next morning, when I took on my role as tour guide for the January urban75 walk.

As are the rules for walk organisers (we take it in turns), the route has to be carefully researched with local landmarks and historical oddities pointed out on the way, so I headed off to the met up point at the fabulous Duke’s Head in Putney armed with a swathe of print outs.

The walk took us along the south bank of the Thames, from Putney through Hammersmith up to Barnes where we grabbed a few drinks. We then crossed the Barnes Bridge and walked along the north bank to Hammersmith, stopping off at the Doves, en route.

It was a lovely day: the weather was sunny and crisp (until the very end) and I had a fine set of companions for the walk!
Expect a photo report in the London features section soon! 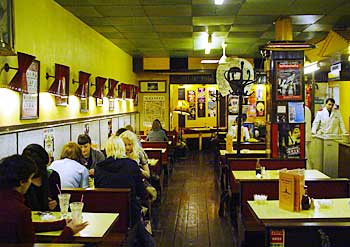 Tonight, we paid a visit to the New Piccadilly Cafe, Denman Street, Soho, London W1, an almost untouched celebration of formica and 60s design in the heart of Soho.

The food is cheap and no-nonsense, the owner Lorenzo warm and friendly and – being a bring your own booze kind of place – the ideal place to get quietly squiffy.

The sad news is that bastard developers are threatening to up the rents so high that this fabulous example of a traditional London cafe will be lost forever and – no doubt – be turned into bland yuppie hell hole.

Return To The Dome

Walking through the West End

A rainy day in London town