Whatever you think of the protest, it’s great to see students getting arsey and uppity about politics again, with an unexpectedly huge crowd – estimated at over 50,000 – protesting about the cuts, as described by the BBC:

Higher education funding is being cut by 40% – with teaching grants being all but wiped out except for science and maths.
The government expects the costs of teaching other courses to be funded by tuition fees.
It proposes that tuition fees should rise from 2012.
The plan is for a lower cap at £6,000, with universities able to charge up to £9,000 – triple the current cap – in “exceptional circumstances”.

There’s currently live TV streaming on the dreadful Sky News channel, who never turn down an opportunity to inflame and exaggerate.

Earlier on they were condemning ‘Anarchist protesters’ for throwing concrete cunningly disguised as sheets of paper off the roof, and they’ve repeatedly run the footage of a solitary fire extinguisher being thrown from hours ago.

Curiously, the police statement seems to be going to some lengths to describe the trouble as coming from a “small minority” – a very different tactic to their usual blanket condemnation of protesters – although if G20 hadn’t have happened, we suspect that those students would be getting a right battering now. 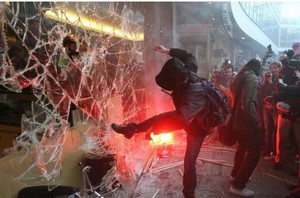 “We oppose all cuts and we stand in solidarity with public sector workers, and all poor, disabled, elderly and working people. We are occupying the roof in opposition to the marketisation of education pushed through by the coalition government, and the system they are pushing through of helping the rich and attacking the poor. We call for direct action to oppose these cuts. This is only the beginning of the resistance to the destruction of our education system and public services.”

Update: 5/1 at Ladbrokes that there’ll be a u-turn on fees now – bettingpro.

Discuss the protest on urban75 now!  NUS national protest against the cuts:

One Comment on “Massive student demo against the cuts; Millbank occupied”