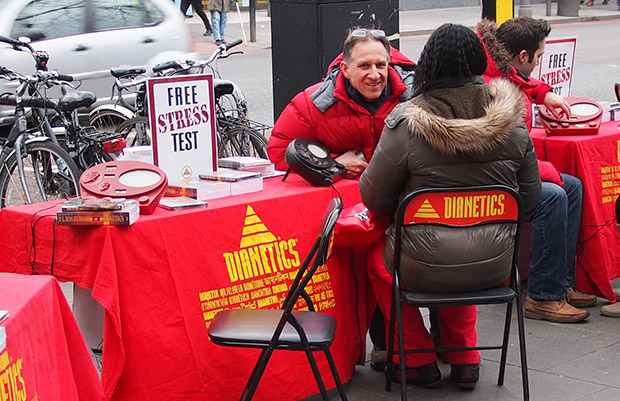 I’ve no idea how this lot got permission to hog a large chunk of public pavement area outside Brixton tube on Saturday, but someone had clearly let the Scientologists set up shop in SW9. 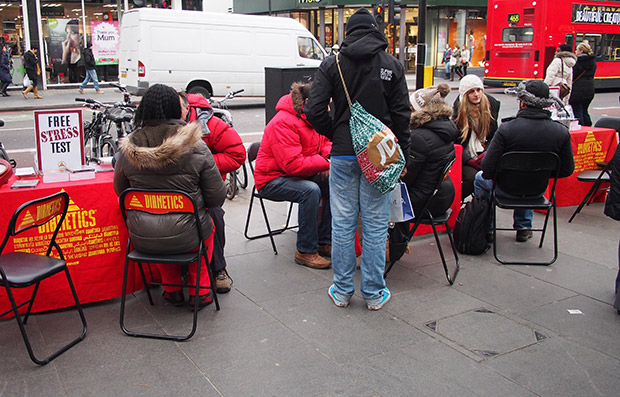 Passers-by were invited to have a free ‘Stress Test,’ which involved hanging on to two tubes of metal while the dial of what’s called an ‘E-Meter’ flickered around.

Results from the machine – basically a modified ohmmeter using technology dating back to 1833 – can lead the ‘auditor’ to diagnose people as needing treatment, which comes in the shape of – you guessed it – paid courses at the nearest Scientology centre.

According to the Telegraph’s Max Pemberton, “Scientologists believe depression is best alleviated by removing the sufferer’s covering of tiny disembodied souls of aliens dispersed by the Galactic Federation leader Xenu.”

Scientific American goes further in their investigation entitled, “The Real Science Behind Scientology“:

If Scientology is not a science, is it even a religion? Well, it does have its own creation myth. Around 75 million years ago Xenu, the ruler of a Galactic Confederation of 76 planets, transported billions of his charges in spaceships similar to DC-8 jets to a planet called Teegeeack (Earth).

There they were placed near volcanoes and killed by exploding hydrogen bombs, after which their “thetans” (souls) remained to inhabit the bodies of future earthlings, causing humans today great spiritual harm and unhappiness that can be remedied through special techniques involving an Electropsychometer (E-meter) in a process called auditing.

So now you know. 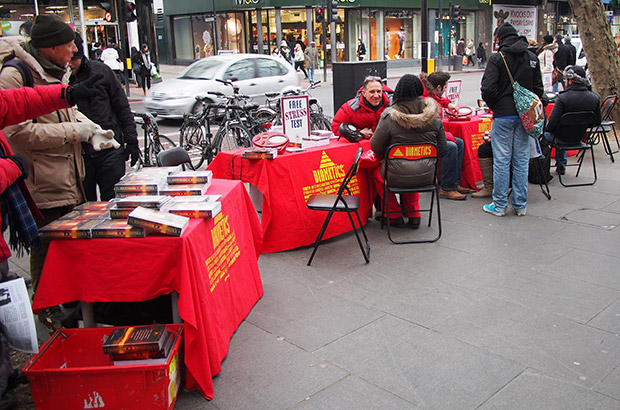 The feckers stole my site

But why were my stress levels rising? Well, back in 2001, Narconon, a Scientology front group lifted the design of the old urban75 site without credit or permission.

A host of sites set up for Narconon’s (ahem) ‘drug rehabilitation, drug education and drug prevention programs’ had simply grabbed my entire design, right down to the introduction text, and just changed the images and words around. 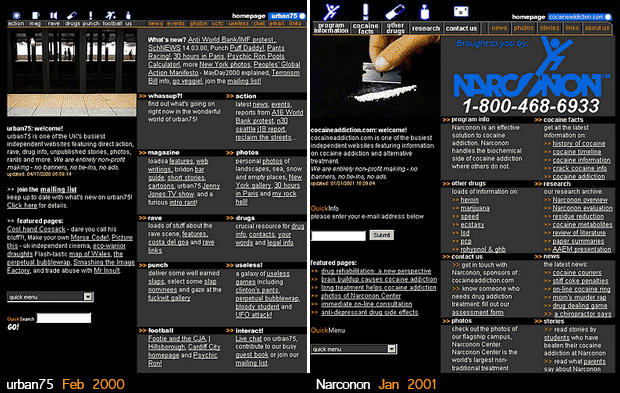 The Guardian reported on the case at the time:

Parts of the pages in question – published by Narconon, a drug treatment programme in the US – were, Slocombe says, a close match to earlier designs on Urban 75. The look and feel were confusingly similar. Certain graphics were identical. Sections of code – including, Slocombe points out, JavaScript for a pop-up window not used on the Narconon pages – were almost identical.

Even phrases were remarkably similar, Slocombe says. A Google search on the Urban 75 catchphrase – We are entirely non-profit, no banners, no tie-ins, no ads – returned only Narconon, Urban 75 and sites linking to Urban 75.

Despite being caught with their pants down, Narconon refused to apologise for lifting my work, and as publicity grew, they swiftly started changing the sites around while denying all knowledge of the original work.

Unfortunately for them, their sites were already independently archived online at web.archive.org – as were the earlier urban75 designs – and they can all still be viewed to this day.

Read more about this – and see some side by side comparisons here:

The Guardian bigs up urban75