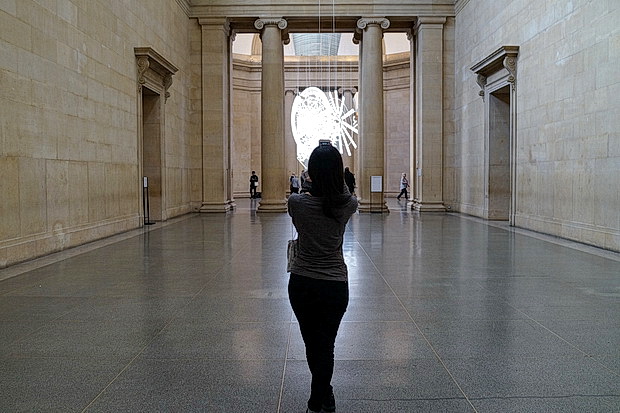 I love a bit of neon art, and there’s a splendid display on at the Tate Britain in London right now, created by Welsh artist, Cerith Wyn Evans. 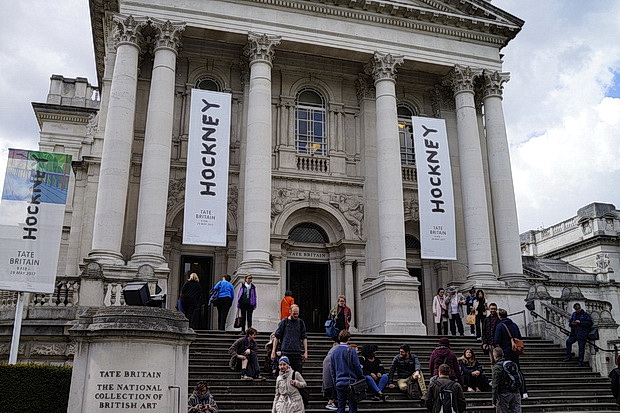 The Tate Britain stands on the banks of the Thames and is one of the largest museums in the country.

Originally known as the National Gallery of British Art from 1897 to 1932, and then the Tate Gallery from 1932 to 2000, the Tate Britain is the oldest Tate gallery in the network, and houses a substantial collection of the art of the United Kingdom since Tudor times. 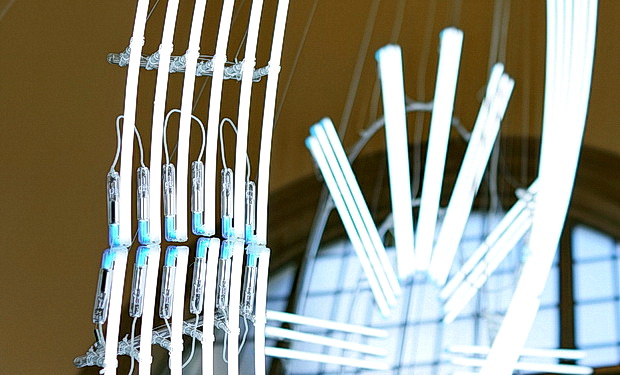 “Forms in Space…by Light (in Time),” to give the work its full title, is the 2017 Tate Britain Commission and has been created created from almost 2km of neon lighting, suspended from the ceiling and configured into straight lines, sweeping curves and spiralling forms. 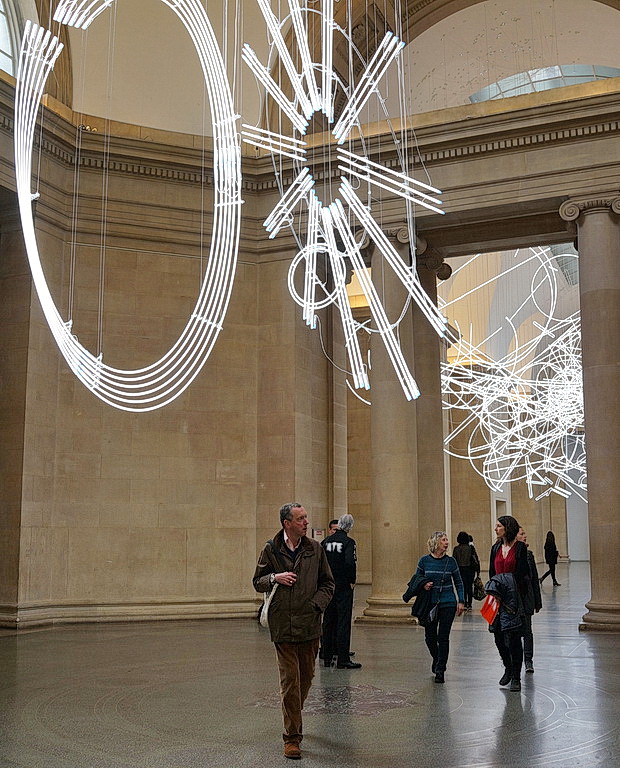 Born in Llanelli in 1958, Cerith Wyn Evans is a Welsh conceptual artist, sculptor and film-maker who first made a name for himself producing experimental films and collaborative works.

He has subsequently expanded his practice to incorporate sculpture, photography, film and text to communicate his interest in language and perception. Read more about him on Wikipedia. 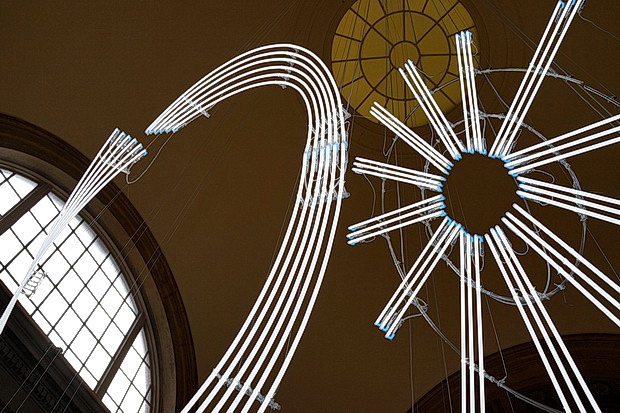 The Tate website has this to say of the work:

This “drawing in space” takes inspiration from the codified and precise movements of Japanese Noh theatre, reflecting the artist’s interest in choreology – the practice of translating movement, such as dance, into notational form, like a musical score.

The commission relates closely to the artist’s earlier sculptures that translated diagrammatic flight paths into neon. The work’s intricate structure, comprised of seemingly endless points of intersection and divergence, and deconstructed sculptural forms play with the viewer’s perspective.

Forms in Space… by Light (in Time) could be viewed as a celestial map, encouraging visitors to orientate themselves within an environment full of potential meanings and connections 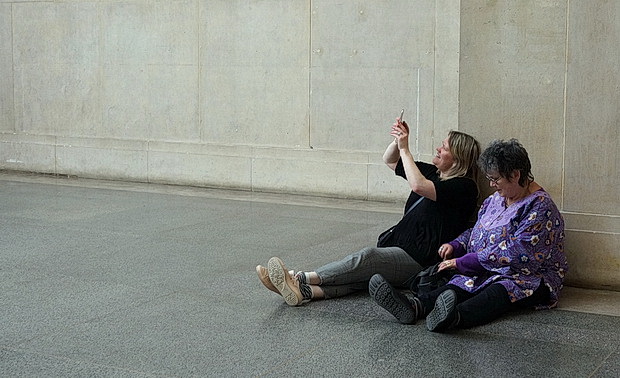 Cerith has made a unique contribution to British and international art for over two decades. This compelling commission demonstrates his ability to create structures out of a light on a challenging scale and reveals the rich world of poetic ideas that informs his projects.

Every year the ambition, inventiveness and sheer scale of the Tate Britain Commission captivates visitors to the magnificent Duveen Galleries. This year, we are proud to be celebrating the tenth anniversary of our support for the commission, which is as unmissable as ever with Cerith Wyn Evans’ architectural light installation. 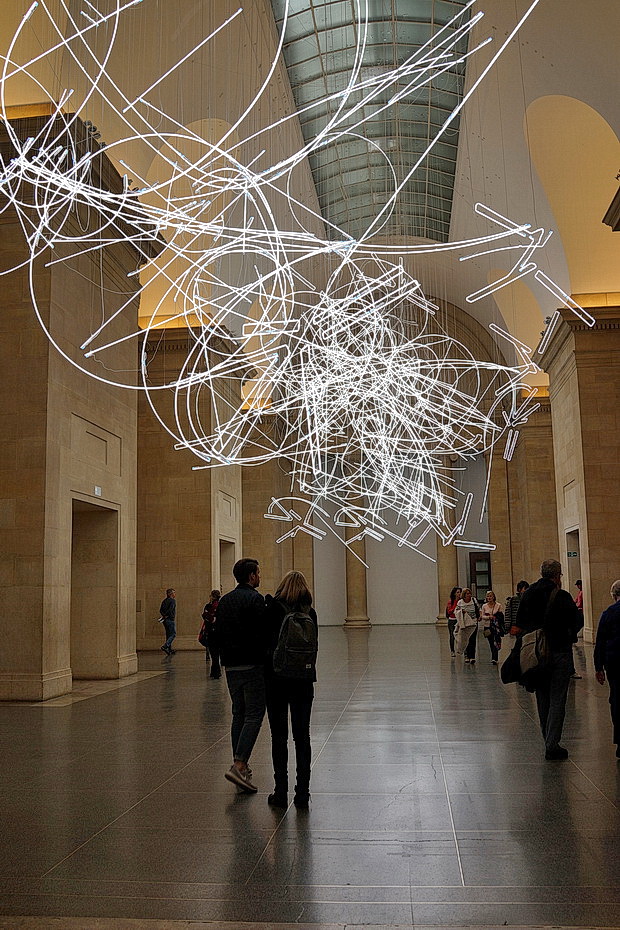 Unlike the pocket-draining £18 tickets to see the Hockney exhibition, it’s absolutely free to view this work and, of course, there’s plenty more free stuff going on at the Tate Britain. 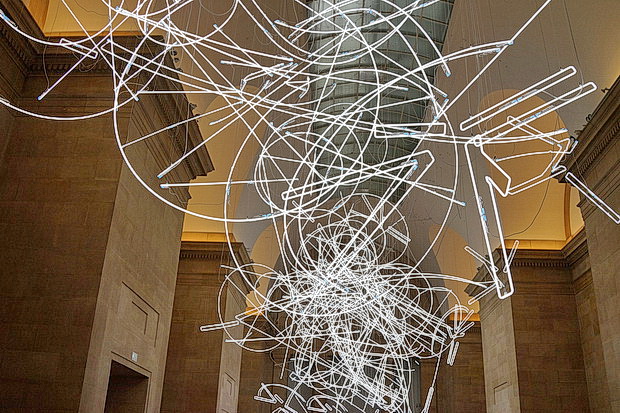 Here’s some more photos of the neon art. I loved it. 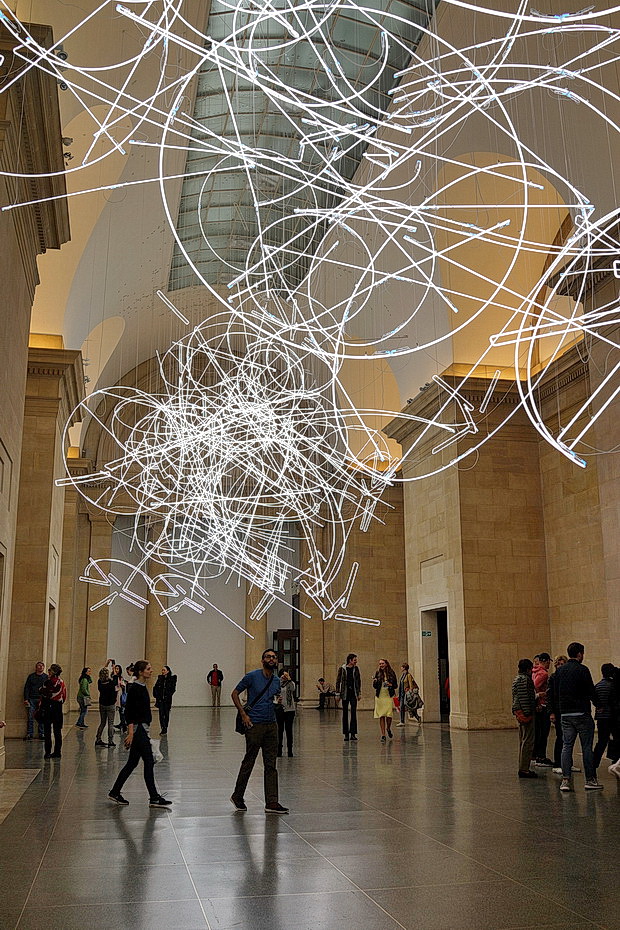 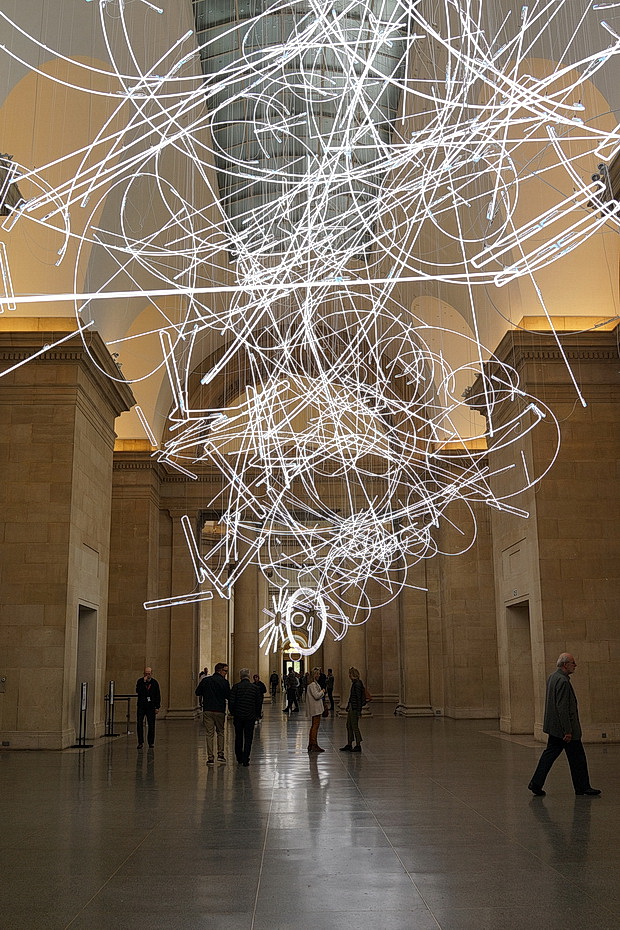 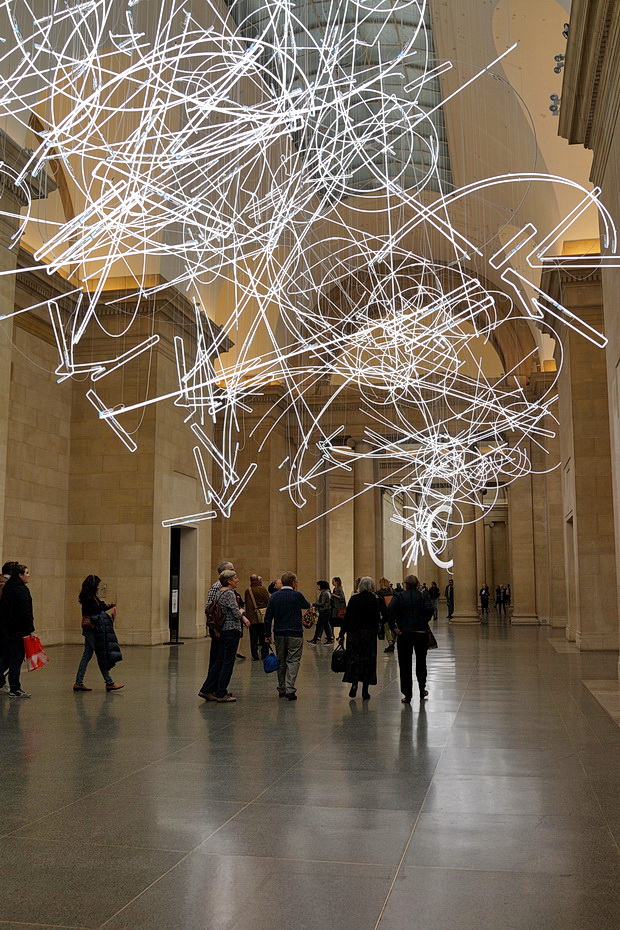 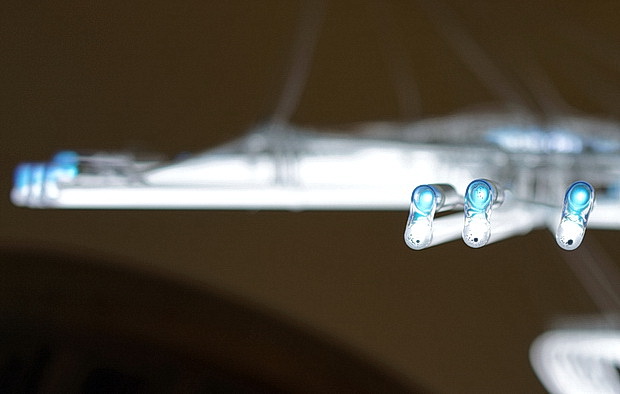 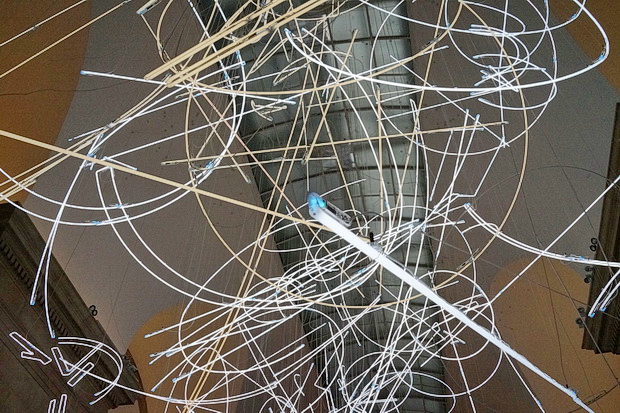 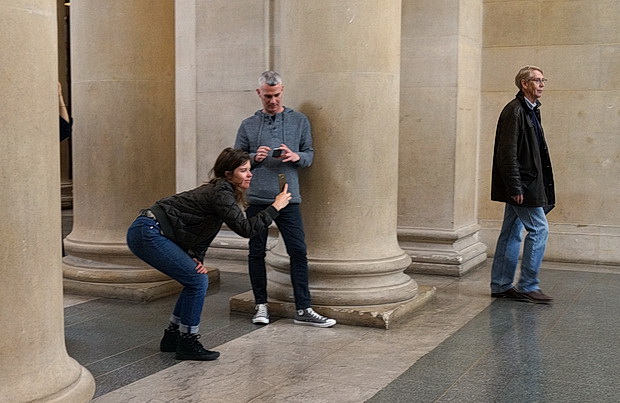 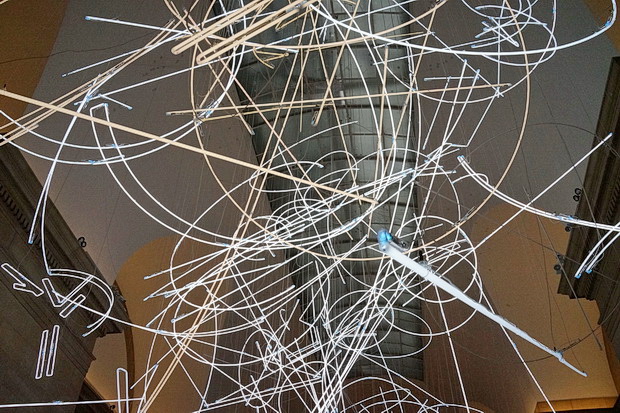 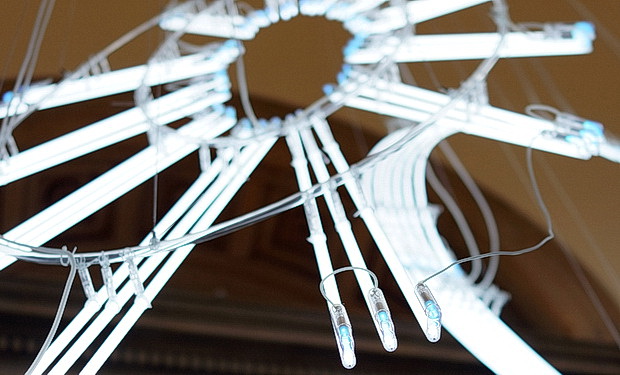 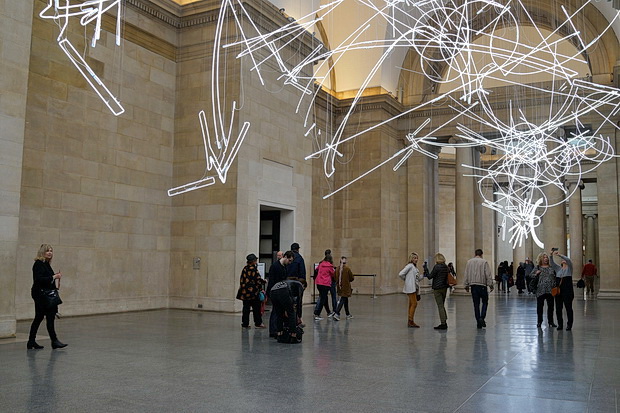 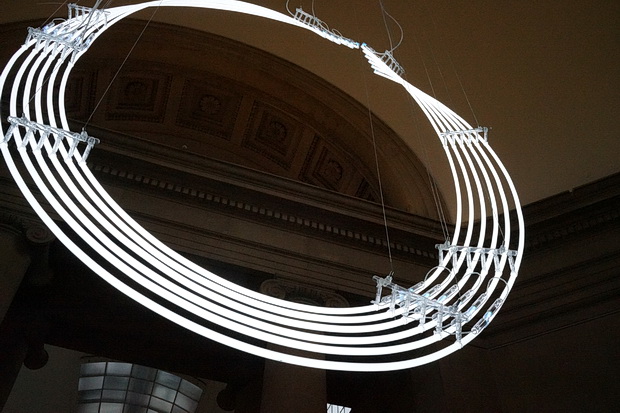 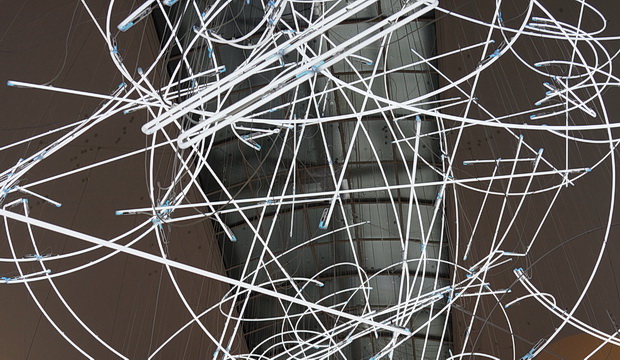 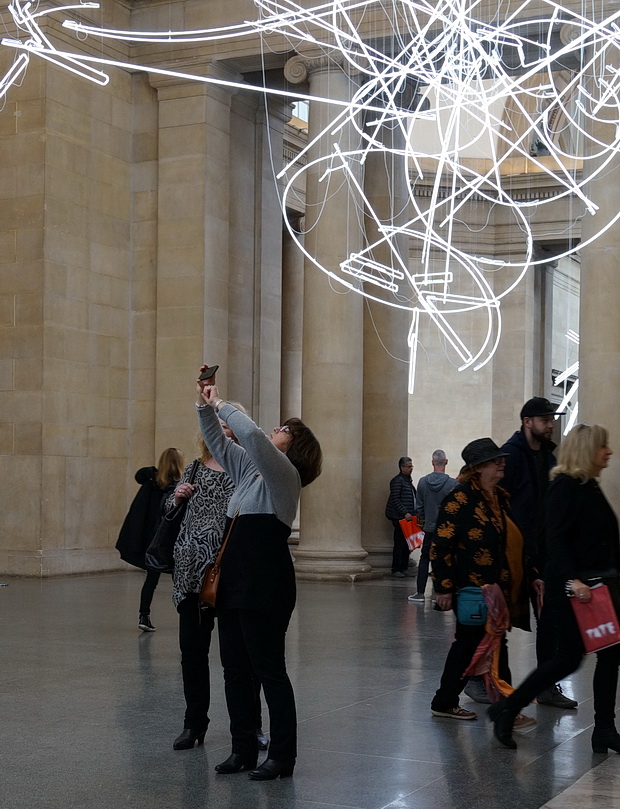 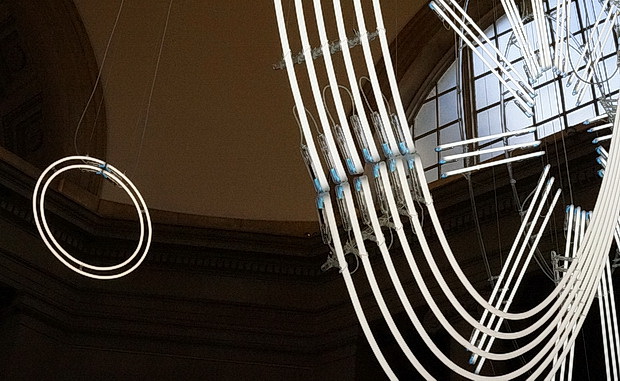 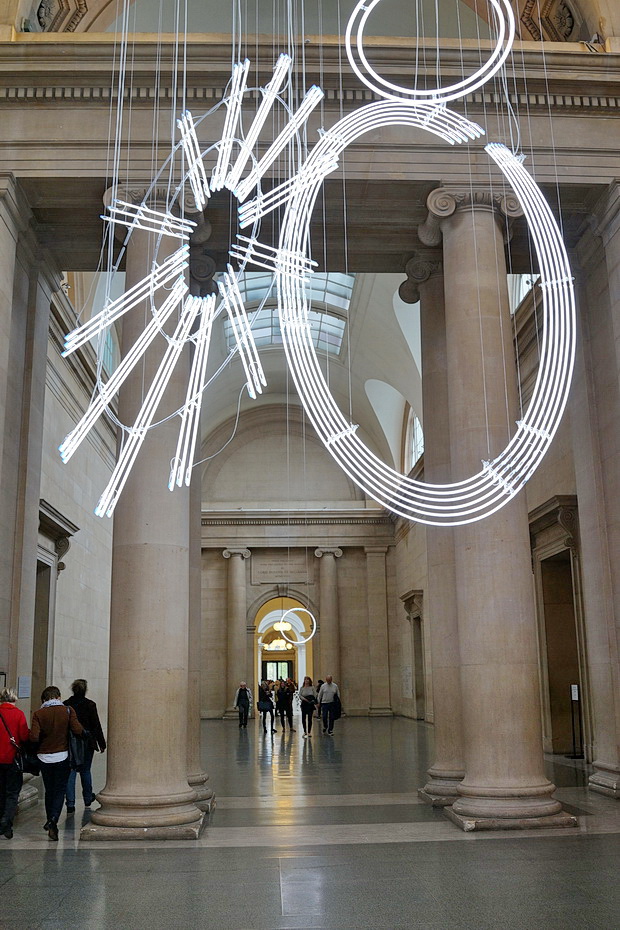 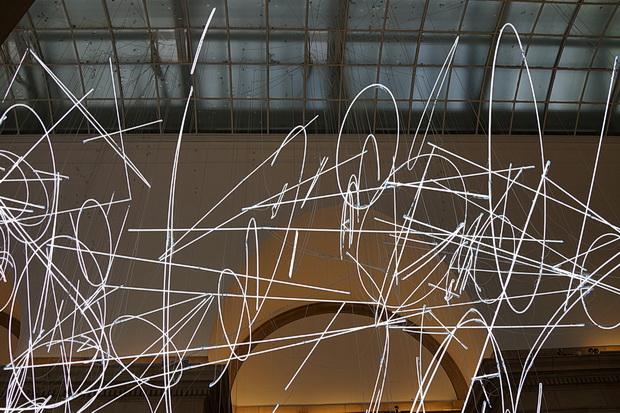 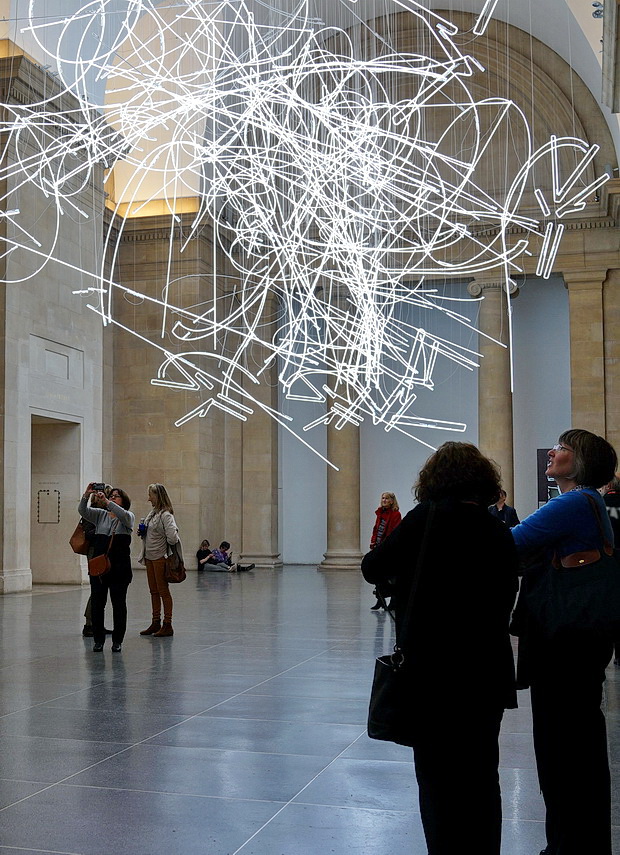 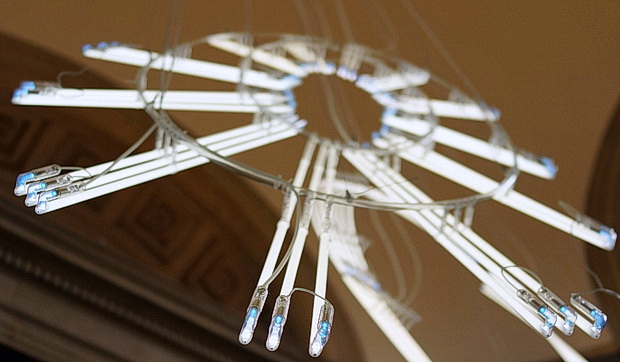 Admission: Free (with charges for some shows).

Chat about the Tate Britain on the forums.