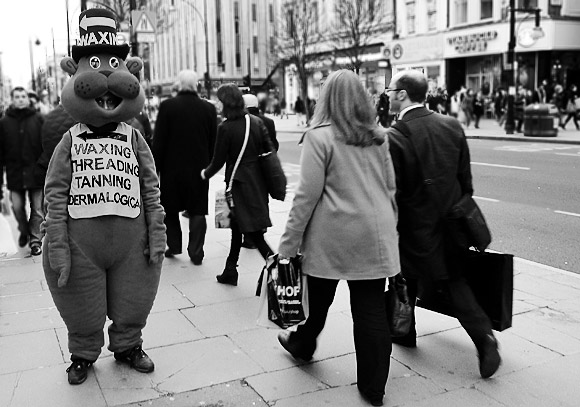 You may be feeling a bit sorry for yourself as it’s a Monday morning – but – come on – things have got to be better than what this poor sod’s going through.

Forced to stand in an ludicrous costume in the middle of Oxford Street, this guy’s whole day is spent being laughed at and irritating passers by in a daft costume extolling the virtues of waxing. 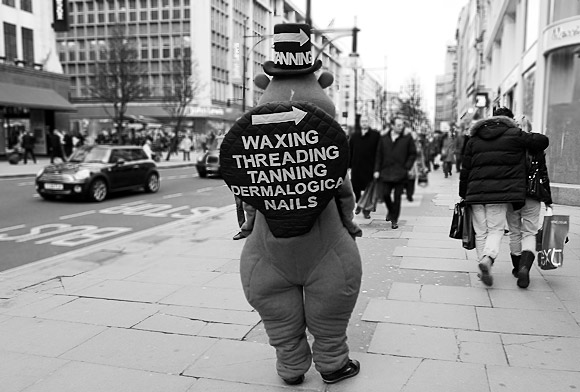 I have total sympathy for the guy – I once had a very similar job where I had to stand in front of a tube station exit at 7am in a gorilla outfit and hand out leaflets to unimpressed commuters.

People rushing into work hated me. Some called me names. Some pushed me about and quite rightly asked what I was doing looking like such a twat in a stupid outfit. Still, it could have been worse. At least I didn’t have to wear the banana costume.

Sandwich board advertisers on the streets

There’s actually a long history of ‘sandwich board’ advertising in London, and in Georgian times the streets would be full of curiously clad folk trying to catch the eye of passers by.

The novelty of placard carriers soon worn off, so advertisers were pressed to come up with new attention-grabbing ideas.

In 1826, the owners of the Weekly Chronicle decided that the simple process of multiplication would do the trick, and dispatched a mobile band followed by a legion of board carriers onto the streets of London.

The shuffling horde advertised a free gift of a print of the famous Nassau Balloon.

In their never-ending quest to capture the eye of passers-by, bigger and more bizarre displays were always being dreamt up.

Robert Warren of 30 Strand was particularly adventurous, coming up with a novel walking display of blacking tins (1830s).

…Scharf recorded a row of six blacking tins walking along The Strand, which must have made for an interesting sight.

More: Human billboards on the streets of London

Discuss it here: Worst job ever?

Brixton fog, 7am Sunday morning. And a bit about pea soupers

5 Comments on “No matter how bad your Monday morning is…(worst job in London?)”