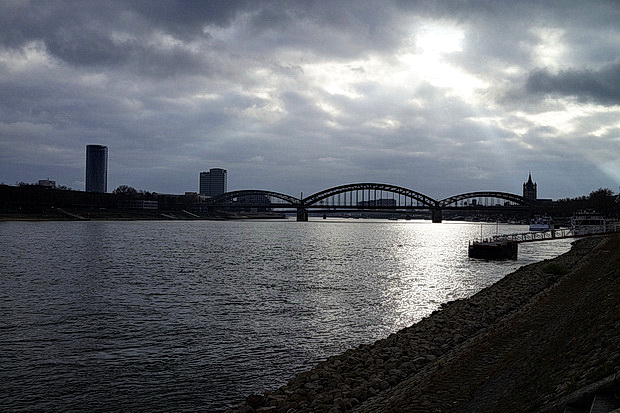 Here’s a short series of photos taken around Cologne/Köln, the largest city in the German federal State of North Rhine-Westphalia and the fourth-largest city in Germany (after Berlin, Hamburg, and Munich). 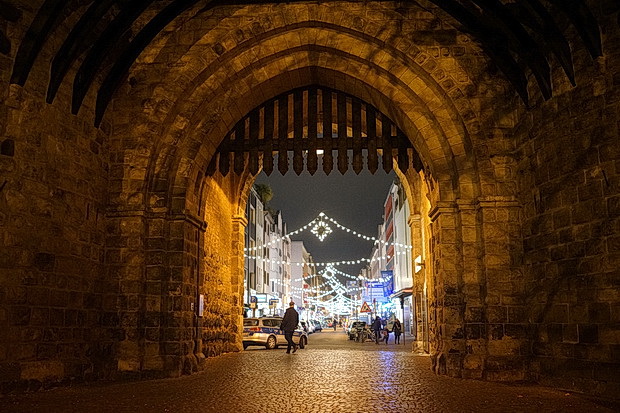 My fleeting visit happened because I was touring Germany with the Monochrome Set, and this was our final night of the eight-day trip. 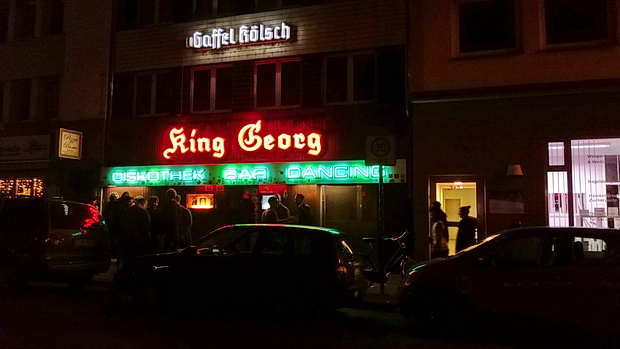 We were playing the King Georg club on Sudermanstraße 2. It was the smallest venue we played – there wasn’t even a stage – but the place was packed and the crowd were very lively. 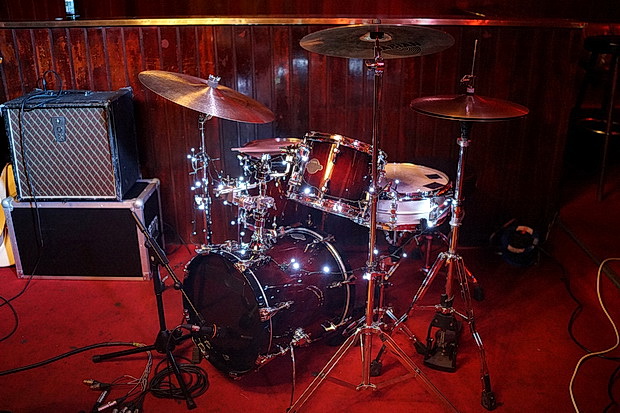 I got a different drum kit every night, and as the tour wore on the bass drums seemed to get smaller and smaller (perhaps this was reflecting my diminishing stature as a drummer!).

At the Leipzig show earlier in the tour, the bass drum was a veritable cannon, and must have been something like 26″ x 26″ in size. By comparison, the Cologne one was a mere 16″ x 16″.

If the tour had continued much longer, I’d probably have ended up with just a broken tambourine. Or a box of matches to rattle. 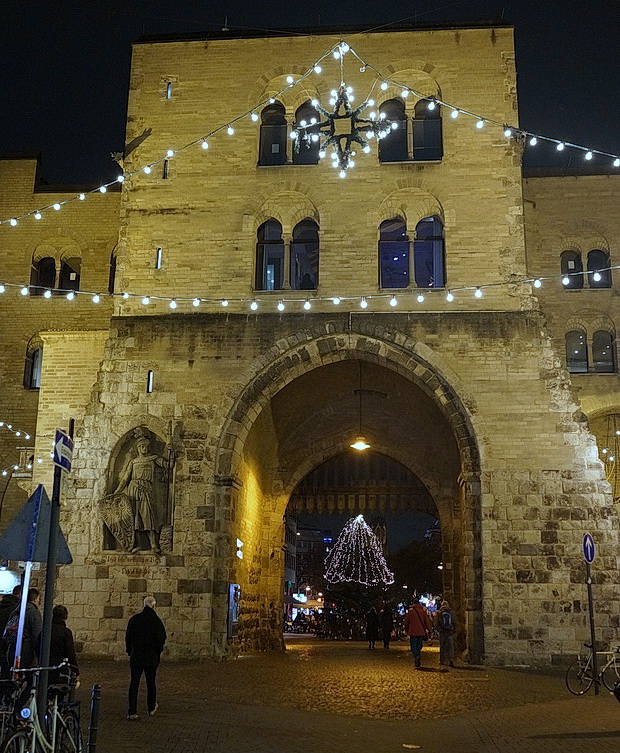 One of the three medieval gatehouses that remain from Cologne’s early fortifications, the Eigelsteintor gate is now the symbol of Eigelstein, one of the lively districts of the town. 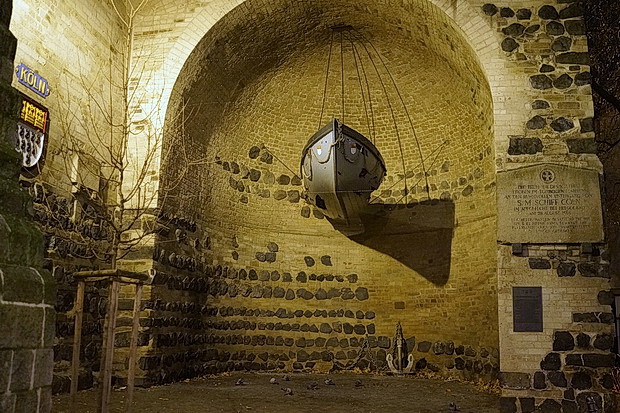 There’s a boat suspended on one side of the gate. 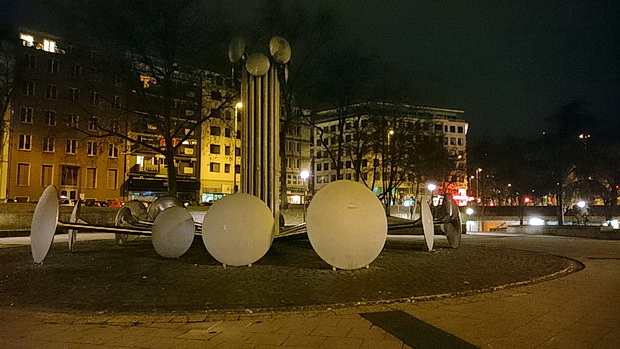 This sculpture stands in the middle of a roundabout. It looks like a load of oversized bar tables have fallen over, but I guess there’s more to it than that. 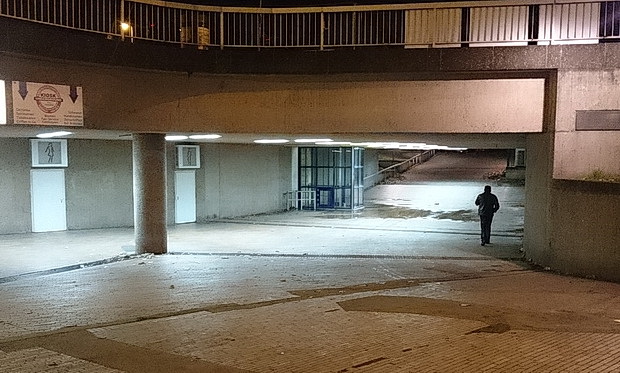 I do like to take in a good underpass or two on my late night rambles. 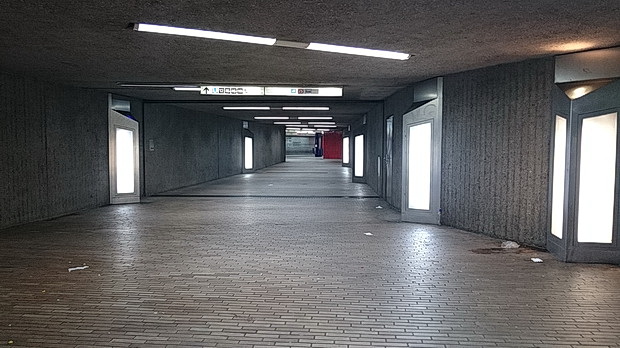 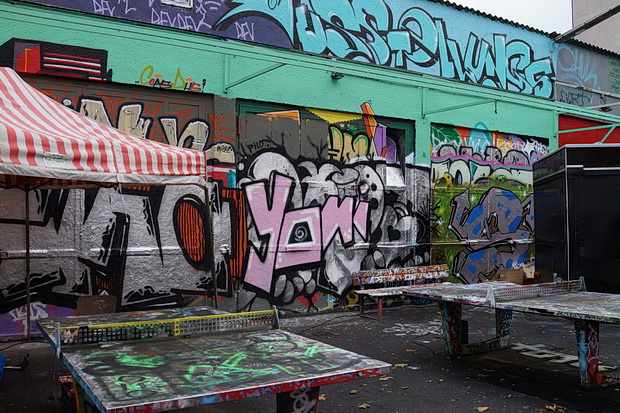 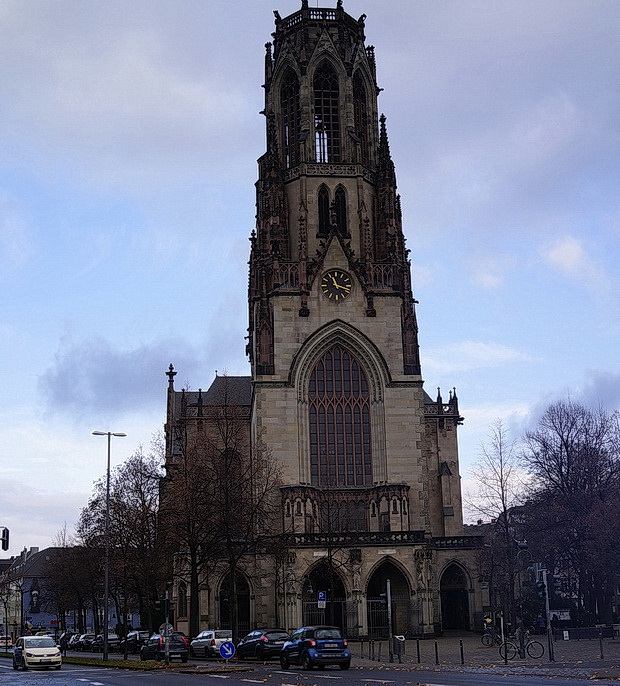 St. Agnes is a neo-Gothic Catholic church in Neustadt-Nord, Cologne and was consecrated in 1902. 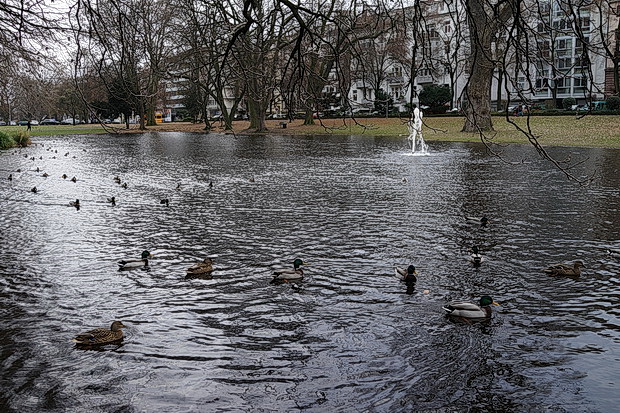 The scene of the crime. I took a walk through the park by Theodor-Heuss-Ring. I was just finishing a sandwich when I saw a load of ducks looking at me in an expectant manner, so I lobbed the last bit of crust in their general direction.

Next thing, two police officers were shouting at me and walking at speed towards me.  I had no idea what they were on about and feared some international incident was about to blow up.

After some initial confusion and some slow translation, I learnt that feeding the ducks is strictly verboten around these parts, hence my warning. So I was let off with a warning, and a story I could freely embellish at a later date (“machine guns, drug busts, you’ll never take me alive, coppers” etc etc).

Incidentally – and I should have known this really – you’re not supposed to feed the ducks bread, even though they seem to love the stuff. 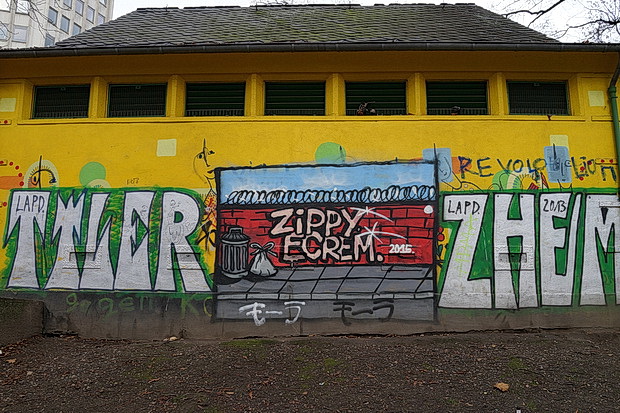 With trains to catch and time now at a premium after I fought the law and the law won, I power-walked thought the park and on to the banks of the River Rhine. 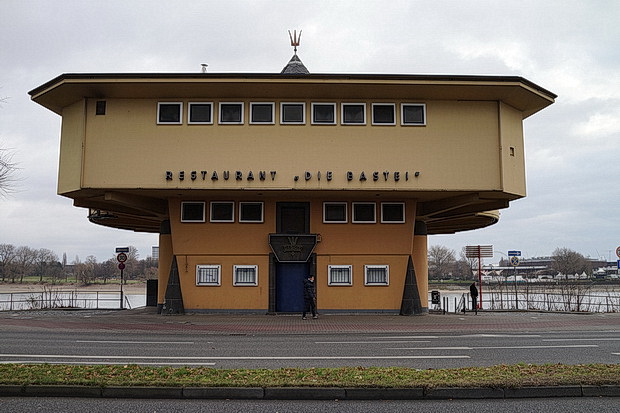 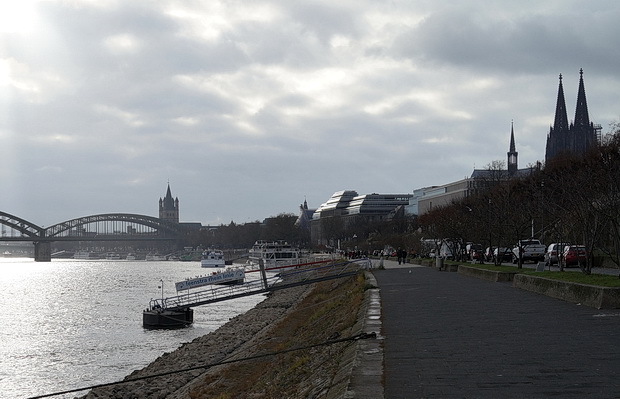 To the right can be seen Cologne Cathedral, the tallest twin-spired church at 157 m (515 ft) tall and Germany’s most visited landmark, attracting an average of 20,000 people a day. [—] 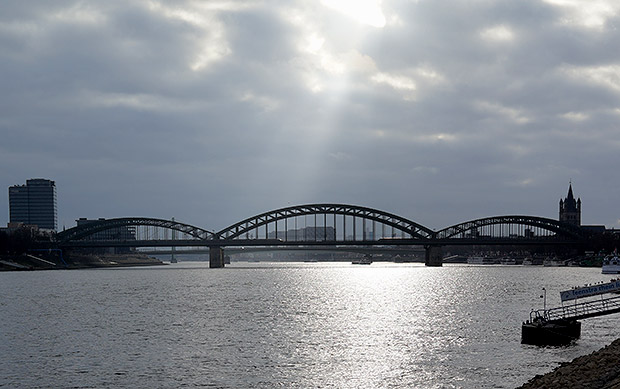 Cologne’s Hohenzollern Bridge is the most heavily used railway bridge in Germany with more than 1,200 trains daily. As Cilla would say, ”That’s a lorra lorra trains.’ 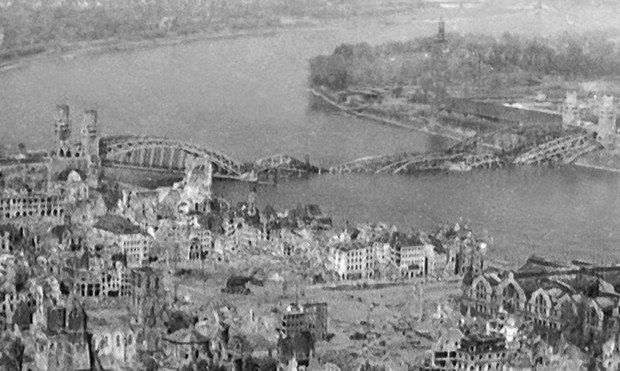 The Hohenzollern Bridge was one of the most important bridges in Germany during World War II and resisted multiple airstrikes by the Allies.

On 6 March 1945, German military engineers blew up the bridge (see above) when Allied troops began their assault on Cologne. It was fully rebuilt by 1959. [—] 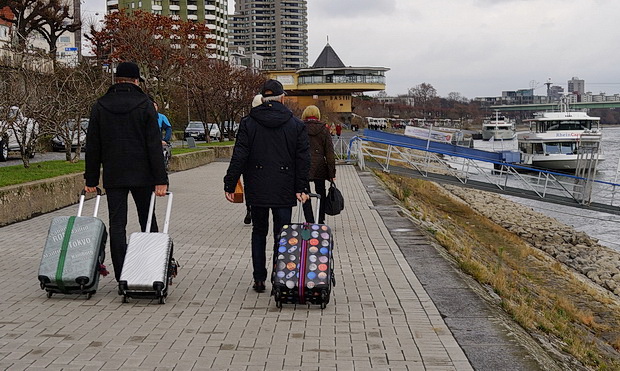 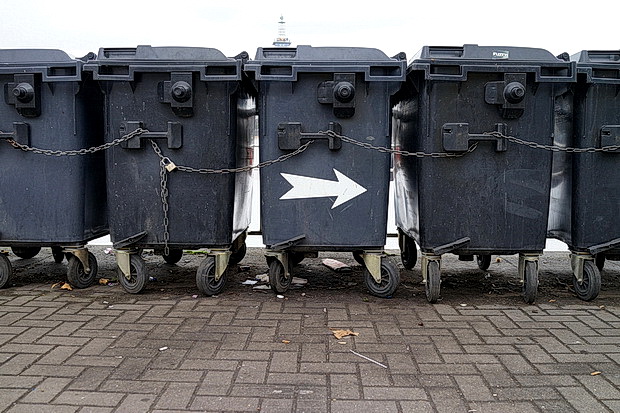 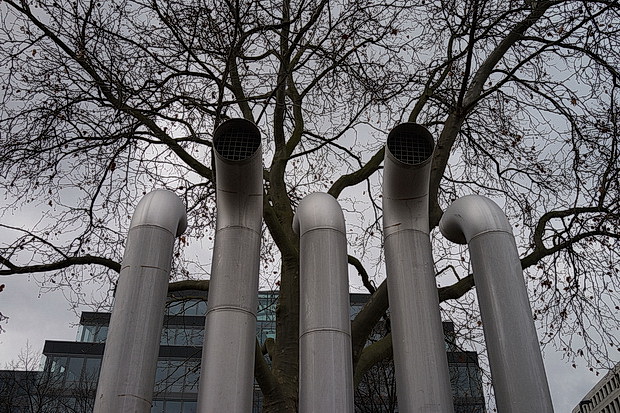 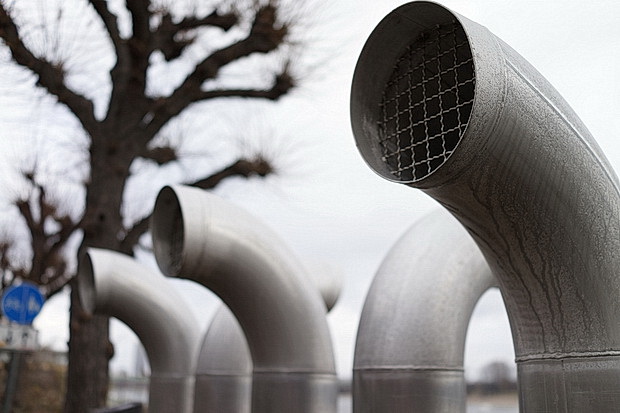 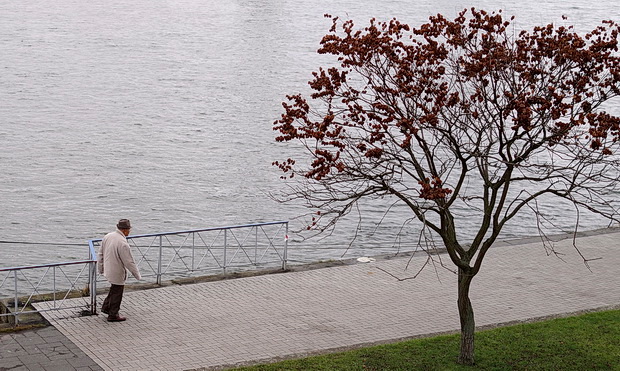 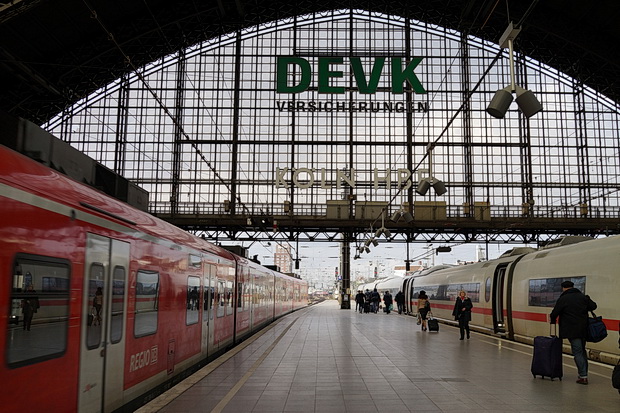 A last look at Cologne before heading back to Blighty.