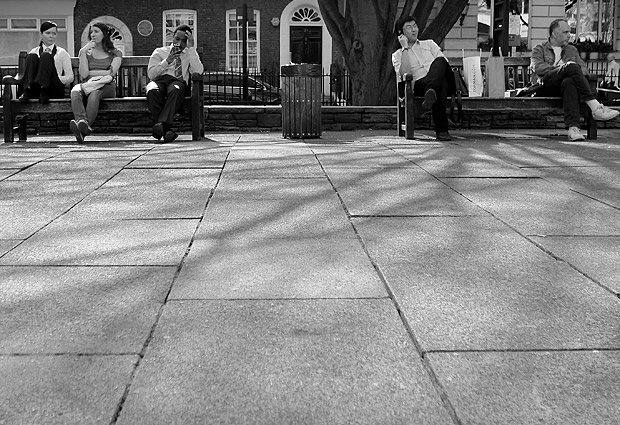 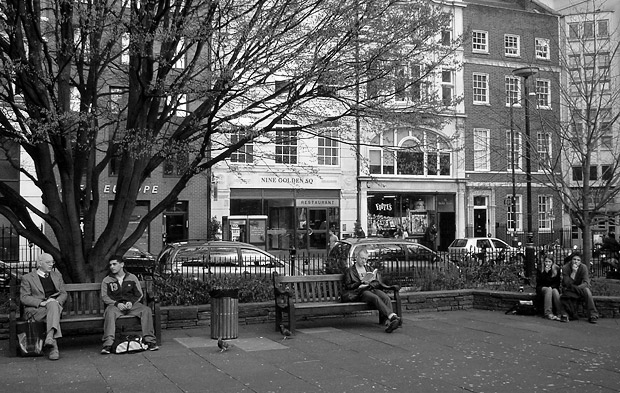 The historic square was most likely laid out according to plans by Sir Christopher Wren from the 1670s onwards, rapidly becoming the political and ambassadorial district of the late 17th and early 18th centuries.

Golden Square is particularly busy at lunchtimes, with workers and shoppers settling down for a bite to eat or just taking in the calmness of this pleasant small park – see a 360 degree view of the square here.

Even better for me is the proximity of the fabulous Footes Drum Store, a veritable Mecca for drummers offering a huge selection of drums and percussive instruments – although it’s not a place to visit with a hangover! 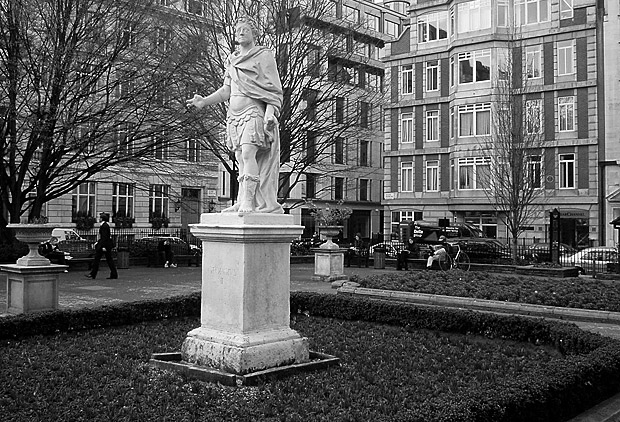 Golden Square features in Charles Dickens’ ‘The Life and Adventures of Nicholas Nickleby’, and the author vividly describes the scene:

Although a few members of the graver professions live about Golden Square, it is not exactly in anybody’s way to or from anywhere. It is one of the squares that have been; a quarter of the town that has gone down in the world, and taken to letting lodgings. Many of its first and second floors are let, furnished, to single gentlemen; and it takes boarders besides. It is a great resort of foreigners.

The dark-complexioned men who wear large rings, and heavy watch-guards, and bushy whiskers, and who congregate under the Opera Colonnade, and about the box-office in the season, between four and five in the afternoon, when they give away the orders,–all live in Golden Square, or within a street of it.

Two or three violins and a wind instrument from the Opera band reside within its precincts. Its boarding-houses are musical, and the notes of pianos and harps float in the evening time round the head of the mournful statue, the guardian genius of a little wilderness of shrubs, in the centre of the square. On a summer’s night, windows are thrown open, and groups of swarthy moustached men are seen by the passer-by, lounging at the casements, and smoking fearfully.

Sounds of gruff voices practising vocal music invade the evening’s silence; and the fumes of choice tobacco scent the air. There, snuff and cigars, and German pipes and flutes, and violins and violoncellos, divide the supremacy between them. It is the region of song and smoke. Street bands are on their mettle in Golden Square; and itinerant glee- singers quaver involuntarily as they raise their voices within its boundaries.