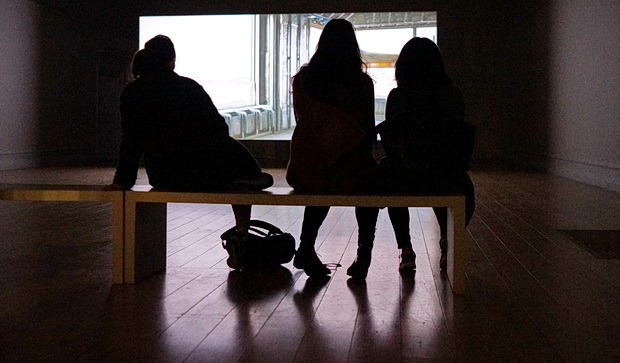 Currently on show until the 26th March 2017 in Camberwell’s South London Gallery is some compelling work by New York-based artist Amie Siegel. 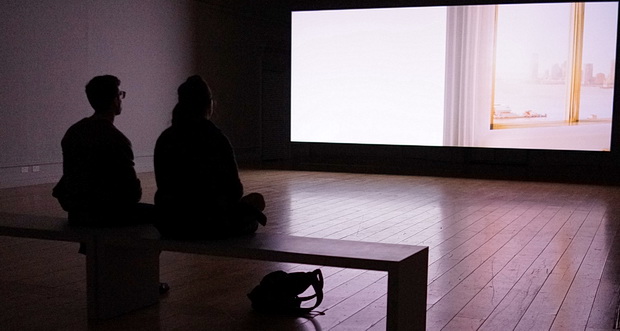 The darkened downstairs gallery has been stripped out to leave a single viewing bench, placed in front of a large screen.

At first I was a bit unimpressed, but slowly I got drawn into the work, and understood the conversation that was being presented about the creation of luxury goods.

Quarry, 2015, projected at cinematic scale in the SLG’s main gallery, traces the excavation of marble from the deepest underground quarry in the world to its almost inevitable use in the modern luxury apartments of Manhattan skyscrapers. Beautiful, formally rigorous, and pointedly underscored by dramatic orchestral sound, this moving image work draws us into a mesmerising exposé of the multi-layered relationships between art, labour and value. 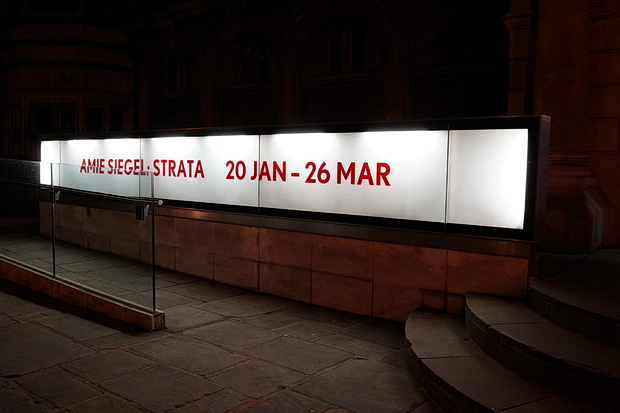 I didn’t get chance to check out the second part of the exhibition (described below), but I’m minded to return to the gallery to watch the Quarry piece again and also view the upstairs gallery:

Fetish, 2016, presented in the first floor galleries, delves further into the stratified relationships between culture, value, and material by focusing on Sigmund Freud’s personal collection of archaeological statues and artefacts. Filmed at the Freud Museum in north London, it portrays the annual nocturnal cleaning of the psychoanalyst’s collection, suggesting an analogy between the careful, almost ritualistic removal of layers of dust from the objects and the intimate excavations and disclosures of analysis, both of which are normally hidden from view.

Proposing a conceptual link between Fetish and Quarry, Siegel presents a new work in the second upstairs gallery – a fragment of pink marble from the lobby of New York City’s Trump Tower. Offered for sale on eBay immediately following the 2016 US election, the marble fragment was purchased by the artist. The fragment’s transformations, from having had a clear use within a building into an apparently functionless piece of rock, and then into a historic relic, are both continued and emphasised through its incorporation into Siegel’s work. Parallel narratives are therefore set in motion, both with the material concerns of Quarry, and the potentially infinite circular conversations around the themes of objecthood and desire explored within Fetish.

Visit the website or read The Guardian’s far more informed review, which concluded:

As cryptic and analytical as it is formally precise, Siegel’s is an art of critical and social observation. Describing a world of possessions and trappings, mindsets and material culture, she shows how things seduce us, beguile us and betray us at every turn. How rich the world is, how squalid we are.

Amie Siegel’s (b. 1974, Chicago, USA) recent solo exhibitions include The Metropolitan Museum of Art, New York, Museum Villa Stuck, Munich; Kunstmuseum Stuttgart and the MAK, Vienna. Siegel has participated in group exhibitions at the Whitney Museum of American Art, NY; Hayward Gallery, London; KW Institute for Contemporary Art, Berlin; CCA Wattis, San Francisco; MoMA PS1; MAXXI Museum, Rome; Haus der Kulturen der Welt, Berlin and the Walker Art Center, Minneapolis. Her work is in public collections including the Whitney Museum of American Art, The Metropolitan Museum of Art, Tate Modern and the Solomon R. Guggenheim Museum. Her films have been screened at the Cannes, Berlin, Toronto and New York Film Festivals, The Museum of Modern Art, New York and The National Gallery of Art, Washington, D.C. She has been a fellow of the DAAD Berliner-Künstlerprogramm and the Guggenheim Foundation, the Fulton Fellow at The Film Study Center at Harvard University, and a recipient of the ICA Boston’s Foster Prize as well as Sundance Institute and Creative Capital Awards.

Some people really want to believe: Conspiracy Week at the Photographer’s Gallery, London