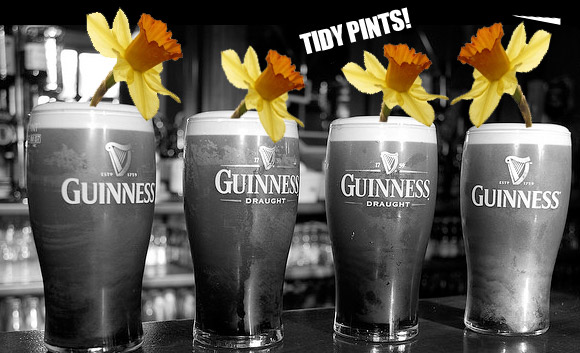 First off, let me wish a happy St Patrick’s Day to my Celtic compatriots and hope you all have a great night tonight – I’ll be out celebrating with my pals at a ceilidh in Brixton.

But in amongst the gallons of flowing Guinness, the daft hats, the begorrahs, leprechauns and the four leaf clovers, there’s a lesser known fact about the man himself, and that is that he was Welsh.

Here’s the BBC to explain all:

Although initially banned, Christianity became the official religion of the Roman Empire. The empire’s collapse in Britain created a ‘Welsh’ people whose identity has traditionally been based on Christianity and a common language.

Christianity arrived in Wales at the height of Roman power and was banned initially by the authorities who were suspicious of its secrecy and exclusivity. At first it was an urban religion, and the first Christian martyrs in Wales were killed early in the fourth century at the legionnaires’ town of Caerleon…

This period is usually called the ‘Age of the Saints’, a time of intense Christian activity in western and northern Britain and Ireland. Probably the most famous ‘Welsh’ missionary is St Patrick, who began the conversion of the Irish people. Ireland would later send out its own missionaries all over western Europe, and Patrick became acknowledged as the patron saint of the island.

Mind you, I’ll acknowledge that the definition of Welsh is pretty flexible here – one account has St Patrick being born in Scotland (when it was part of a then very elastic Wales), while another has him born in south Wales.

Either way, I imagine I’ll be too pissed to care either way in a few hours, so have a good night y’all!