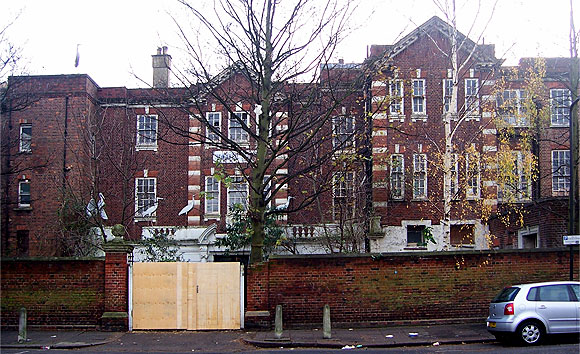 Formerly the Annie McCall maternity hospital, the Stockwell Studios have provided a local cultural educational resource for the past two decades.

Sadly, the studios are once again facing an uncertain future, as detailed in their latest press release:

Save the Annie McCall Hospital
We are sorry to inform you that once again Stockwell Studios are in danger of eviction from their long term premises.

As you may recall, thanks largely to your support, last year Stockwell Studios managed to reach agreement with the London Borough of Lambeth. That if they could satisfy council insurers by meeting basic health and safety standards then they could remain on their current site. Acting in good faith, the members of Stockwell Studios immediately invested £30,000 of their own money to pay for emergency improvements to the building.

In return Lambeth offered the studios a five year lease with a two and a half year break clause. Although the offer of the lease was very welcome, it was just too short and the studios sought to negotiate a slightly longer term.

In the mean time, in order to fulfill all the requirements demanded by the council, Stockwell Studios embarked on a second phase of improvements to the site.

Digging deep, they spent a further £20,000 to completely rewire the building. Four weeks ago the Studios were told that the council, under pressure to get a capital receipt for the site, retracted their offer of a lease.

While Stockwell Studios realise the enormous pressures on Lambeth to cut costs, they would like the council to recognize the hard work and commitment the studios have made to the site over the last 25 years.

Not least, that the members have taken out personal loans to cover the cost of the recent health and safety work on the understanding that they could continue on the site.

In January the studios will meet with the council to discuss the long-term future of the site.
We appeal to you for any advice, direction or support you are able to give. In line with the objectives of the current government Stockwell Studios are looking at ways to acquire the site for the community.

2010 saw Stockwell Studios work with volunteers from Ernst and Young to develop a number of wildlife habitats that include a pond, bog garden and various plantings to encourage insect habitats.

As a result the twice weekly Garden open days continue to be very popular with both regular and one off visitors. Last spring the London Bee Keepers Association introduced four hives into the garden.

The Studios proved such a good apiary that the L.B.K.A. now use it as demonstration site to give weekly classes on how to keep a healthy colony – our bees have already produced one batch of prize winning honey!

Find out more about the studios here.

Sunday night at the Stockwell Grosvenor

Feast of fiddles at The Grosvenor, Stockwell

Not an ice cream van, Stockwell