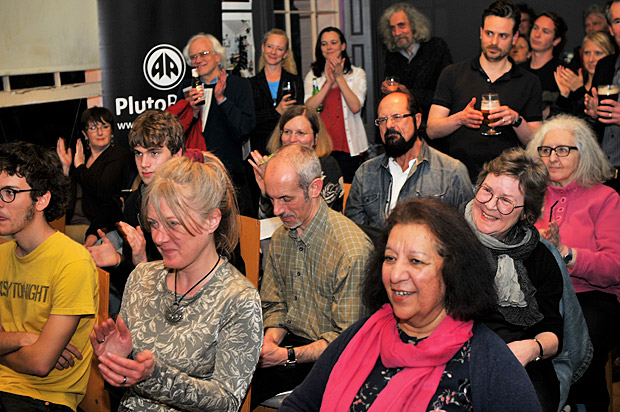 Last night, I headed to uptown Clapham for the Bread and Roses Award for Radical Publishing 2012. Here’s some photos from the evening. 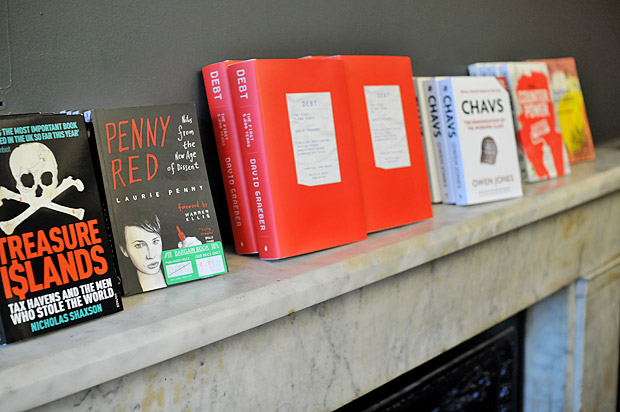 The ceremony took place upstairs at the Bread and Roses pub on Clapham Manor Street – a jaunty 20 minute walk from Brixton. 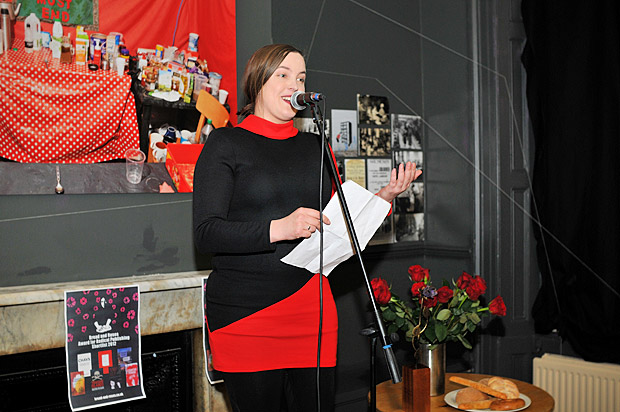 Judged by Madeline Heneghan, Nina Power and Michael Rosen, the award winner could look forward to trousering a cheque for £1,000 and bagging a commemorative trophy. 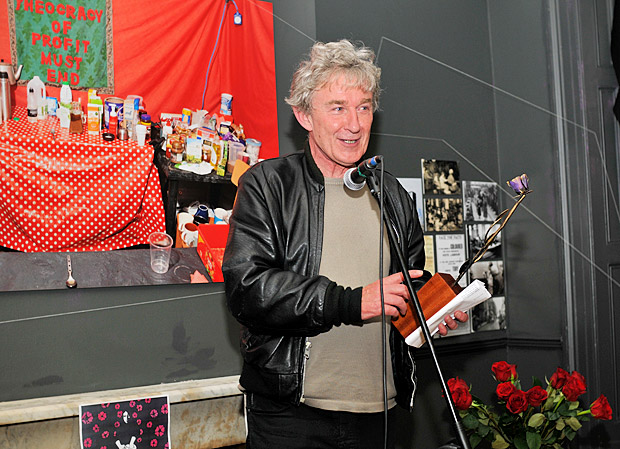 After a reported ‘deadlock’ between the judges, the winner was declared to be David Graeber’s ‘Debt: The First 5,000 Years.’ 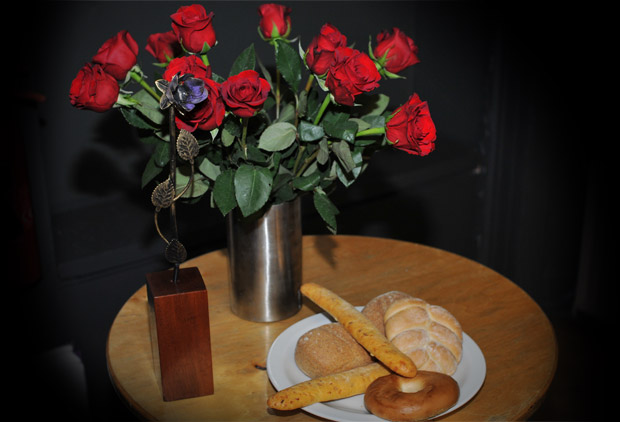 Described as a “brilliantly researched book” the winner was commended for being “engaging, readable, relevant, motivated by a clear political will, and utterly indispensable, not only for understanding the terms of the world we live in, where they came from, but also for what we do about changing them”. 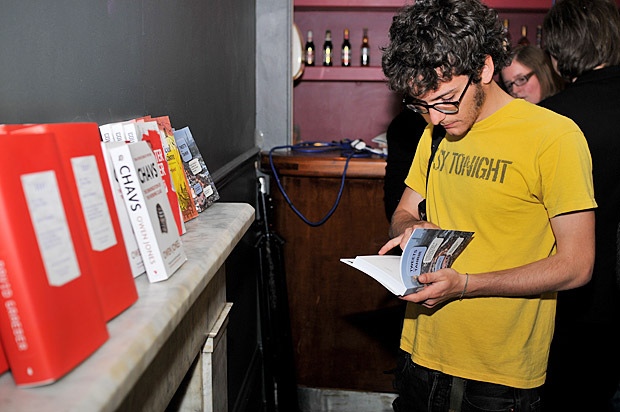 I enjoyed several more pints in the bar downstairs, and watched this fella (below) knock out some bluesy tunes. 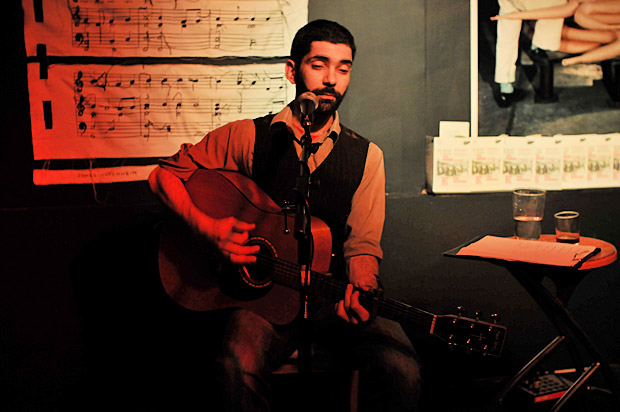 It’s rather a lengthy affair so it might be an idea to brew up a cuppa before settling down to read it.

The judges felt that this brilliantly researched book was “engaging, readable, relevant, motivated by a clear political will, and utterly indispensable, not only for understanding the terms of the world we live in, where they came from, but also for what we do about changing them”.

Although academic in its scope and scale, the judges commended Graeber for the quality of the language, and effort to make the ideas accessible and readily comprehensible.

Graeber’s book narrowly came through after judges struggled to pick a winner between it and Nicholas Shaxson’s ‘Treasure Islands: Tax Havens and the men who stole the world’, which they commended for its thoroughness of research, and ‘usefulness’ in the current political climate.

Although based in London and holding the position of Reader in Social Anthropology at Goldsmiths, University of London, David Graeberwas unable to collect the prize as he is currently on a research trip in the United States. A representative fromTurnaround distributors collected the award and the prize money of £1,000 on his behalf.

The winner was announced at a ceremony on International Workers’ Day, 1st May 2012, at the trade union-run Bread and Roses pub in Clapham. The pub is currently in the middle of a season of cultural events celebrating the centenary of the Bread and Roses strike.

The Bread and Roses Award for Radical Publishingaims to promote the publication of radical books, to raise the profile of radical publishing, and to reward exceptional work. Without being too prescriptive in defining ‘radical’, the shortlisted books are informed by socialist, anarchist, environmental, feminist and anti-racist concerns, and primarily will inspire, support or report on political and/or personal change. They may relate to global, national, local or specialist areas of interest. To be eligible books must have been published in 2011, and the author’s or editor’s primary residence must be in the UK.

Quotes from the Bread and Roses judges
Announcing the winner on behalf of the judging panel, Nina Power said:
“The winner of the first Bread and Roses prize for Radical Publishing has written a text that breaks many rules, and does so excellently in each case: this is a book that covers so much material, refers to so many historical periods and geographical spaces, that the reader is dazzled – not only by the easy erudition of the writer but about how much it is possible to learn and with so little pain.

It’s a book that has the appearance – and at 534 pages, literally so – of a fearsome academic tract. But it avoids everything that frequently plagues academic writing: this book is instead engaging, readable, relevant, motivated by a clear political will and utterly indispensable not only for understanding the terms of the world we live in, where they came from, but also for what we do about changing them. It is a book written from the heart, albeit with the aid of a library the size of a palace – a people’s palace, that is!”

What makes good radical writing?
Nik Górecki of Housmans Bookshop, and one of the Trustees of the prize, found that the notion of judging radical writing was problematic, and brought up some interesting questions as to how to evaluate desirable qualities:
“In trying to create guidelines for the judging process, we soon found that certain desirable criteria often contradicted one another, such as relevance to the current political situation as opposed to valuable historical analysis, or writing that is populist and rousing against more theoretical and reflective work. The question of ‘what political texts people want to read, as opposed to those the author wants them to read’ is still unresolved.

We hope that as the prize continues in the future this is something we will continue to address, and that readers, writers and publishers will debate. We are starting this process by holding a panel discussion on the 9th May at Housmans Bookshop with Pluto Press editor Anne Beech, anarchist blogger Ian Bone, and Guardian journalist Suzanne Moore, asking ‘What makes good radical writing?’”

More quotes from the Bread and Roses Trustees

“To my knowledge this is the only book prize in the UK with what could be described as having an explicitly left-wing entry criterion. The central involvement of radical bookshops in the establishment and running of the Bread and Roses award also really sets it apart from other book prizes.” Nik Górecki, Housmans Bookshop

“Radical publishing is going through a renaissance, making the establishment of the Bread and Roses Award timely.” Ross Bradshaw, Five Leaves Publishing
The Alliance of Radical Booksellers
The Bread and Roses prize is awarded by the Alliance of Radical Booksellers (ARB), a recently formed organisation, which helps to support and promote the work of Britain’s progressive booksellers.
www.radicalbooksellers.co.uk
The 2012 Shortlist

The following seven books were shortlisted:

What makes some campaigns succeed while others fail? In this accessible primer on power and rebellion, Tim Gee encourages us to think critically about the forces at work in struggles as diverse as the women’s suffrage movement and the Arab Spring. Counterpower provides today’s activists with inspiration for the future.

Contrary to the fairytales told in economic textbooks, human beings didn’t start with barter, discover money, and then develop credit systems. In fact, as anarchist and anthropologist David Graeber argues in this wide-ranging work, drawing on a vast panoply of evidence, exactly the reverse is true. Moreover – and whether we recognise it or not – debt has been at the heart of our political and moral systems ever since.

‘Tweets from Tahrir: Egypt’s Revolution as it Unfolded, in the Words of the People Who Made it’ edited by Nadia Idle and Alex Nunns
OR Books, £8.00

The story of the Egyptian uprising – through the toppling of Mubarak – by the people who made it, told in 140-or-fewer-character Tweets. Editors Nadia Idle and Alex Nunns have created an inspiring and coherent narrative that not only explains the evolving strategies of both sides but also allows the participants’ personalities to shine through.

‘Chavs: The Demonization of the Working Class’ by Owen Jones
Verso, £14.99

In order to deflect blame from their own role in increasing inequality and decreasing social mobility, Britain’s political and media elites have wilfully promoted the notion of the working class as an object of fear and ridicule. Expertly researched and highly topical, Owen Jones’ book is already a bestseller in radical bookshops around the UK.

Urban theorist Andy Merrifield imagines a Marxism that moves beyond the stale debates about class and the role of the state, drawing inspiration from – and connections between – The Invisible Committee’s ‘The Coming Insurrection’, Guy Debord’s ‘Society of the Spectacle’ and Gabriel García Márquez’s ‘Hundred Years of Solitude’. Highly readable.

Whether filing a report from inside a police kettle in Whitehall or analysing the feminist implications of Stieg Larsson’s ‘The Girl with the Dragon Tattoo’, Laurie Penny’s writing is always sharp as a knife. Angry and articulate, this is essential reading for anyone wanting to understand and engage with the new generation of UK activists.

‘Treasure Islands: Tax Havens and the Men who Stole the World’ by Nicholas Shaxson
Vintage, £8.99

Nicholas Shaxson’s exposé of the mechanics of tax havens reveals a collusion between governments and the wealthy that perverts democracy, sidesteps the law, and leaves the poorest paying the price. Clear, gripping and incendiary, this is an essential primer for anyone trying to understand today’s global economy.
More information and links