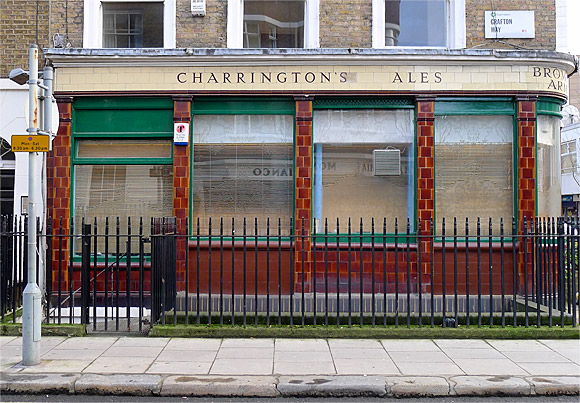 Rather cruelly dismissed as a “late building of no interest,” in  the Survey of London: volume 21 (1949), the Bromley Arms used to be at 84 Cleveland Street (corner of Grafton Way) London, W1T 6NG.

Still proudly sporting its Charrington’s heritage but now, alas, no longer serving up beers to the local community, the pub closed several years ago. 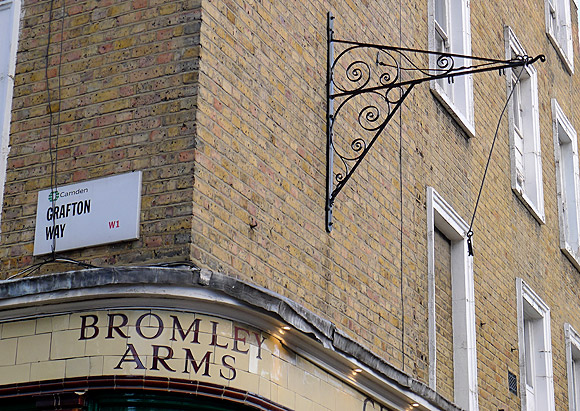 The case of the bad shilling

Trawling the web I was unable to find much information about the pub, although there is a court account from 1868, where a nineteen year old called Susan Phillips was sentenced to twelve months’ imprisonment for “Unlawfully uttering counterfeit coin”.

Here’s the full case, as recorded in the Old Bailey Proceedings of 6th January 1868.

ANNIE WARREN . I am barmaid at the Waterloo Arms, High Street, Marylebone—on 21st November I served the prisoner with a half-quartern of gin, it came to 2½d.—she gave me a bad shilling, which I afterwards gave to Donovan—I told her it was bad—she said that she wondered where she took it from.
Prisoner. It was not me who gave you the bad shilling, it was the person who was with me. Witness. I took it from you, the other woman put down 2d., which was not enough, and then you paid—I gave you both in custody.

JOHN DONOVAN (Policeman 174 A). On 21st November the last witness gave the prisoner and another woman into my custody with this bad shilling (produced)—they were charged at the police-court and discharged—the prisoner gave her name Susan Brown.

WILLIAM BAYLET . I am barman at the Bromley Arms, Cleveland Street, Fitzroy Square—on 11th December, between three and four o’clock, I served the prisoner with a half-quartern of gin, which came to 2¼d.—she gave me a bad shilling—I bent it, and said, “Are you aware this is a bad one?”—she said, “Is it?”—I said, “Yes”—she took it up and paid with a good sixpence—next day, about twelve o’clock, she came again, and I saw Mrs. Marshall serve her with a half-quartern of gin—she paid with a shilling, got the change, and left—I spoke to my mistress, who looked at the shilling, found it was bad, and put it by itself at the back of a shelf—I gave it to Mr. Cook, the manager, half an hour afterwards—about a quarter-past two the same day the prisoner came again, and I served her with a half-quartern of gin—she gave me a bad shilling, which I gave to Mr. Cook, and asked her in his presence how many she had got of those—she made no reply, and was given in custody.

Prisoner. I was not there the day before, nor yet in the morning—you put the shilling into the till, and then took it out and gave it to the master.

Witness. I did not.

JANE ANN MARSHALL . I am a widow, and keep the Bromley Arms, Cleveland Street—Mr. Cook is my manager—on 12th December, about a quarter to twelve, the prisoner came in for a half-quartern of gin and gave me a shilling—I looked at it, in consequence of what Bayley said, found it was bad, and put it on a shelf by itself.

BENJAMIN COOK . I am Mrs. Marshall’s manager—on 12th December Bayley gave me a bad staling, which he took from a shelf—I received another bad shilling from him in the afternoon, in the prisoner’s presence—the prisoner had tried to pass a bad shilling on me three weeks before, which I gave back to her.

Mind you, if you think that’s harsh, on the same page can be found the story of a 21 year old John Eday found guilty of “Stealing a handkerchief from a person unknown,” and getting no less than ‘Seven Years’ Penal Servitude’ for his troubles. 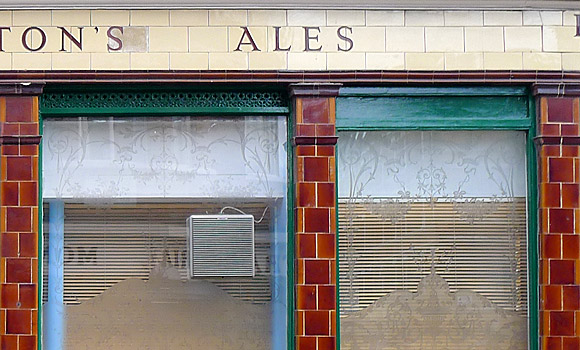 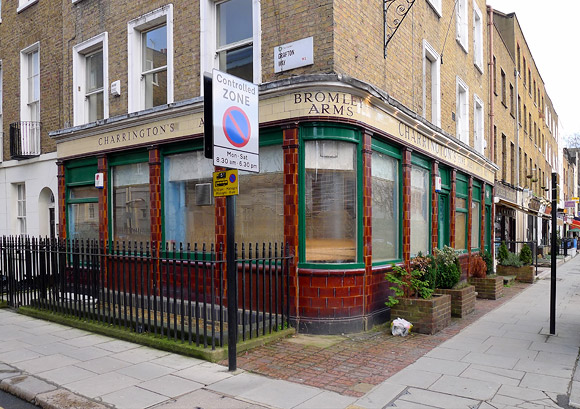 Did you ever go the pub? Got any stories? Add a comment below!

We feel the love for Saturday night at the Lansdown Arms, Lewes

The curious case of the Tap Dancing Smiths fan (video)

2 Comments on “The Bromley Arms, Cleveland St NW1 and the case of the bad shilling”