There may be a certain truth to the assumption that working in the music business is a cool job, but after spending years working at gigs and clubs in a wide variety of capacities, I’ve learnt that some jobs are definitely seen as being cooler than others.

From hard-earned personal experience, I can tell you what are the coolest jobs and the least appreciated jobs at a music venue – and try not to get too bitter that they’re usually the ones I end up with.

So here’s my top ten, starting with the coolest job of the lot:

1. The band (so long as they’re good of course). If you’re strutting around with a guitar, drums or anything else vaguely musical, you’re almost certainly the coolest folks in the venue. You’ll have no problem striking up conversations with attractive and interesting people, with some drinkers keen to learn more about you, your motivations, and your aspirations. And quite possibly what lurks inside your y-fronts/panties/g-string/super-tight pants.

2. The Compere. You’re oiling the wheels of entertainment, so they owe you. Expect people to come up and chat with you – and perhaps even flirt wildly if they liked the jokes or want you to announce something. 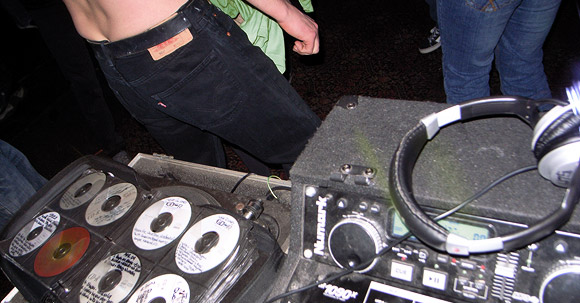 3. DJs. With fairly minimal effort, you can become the focus of attention, and if you’ve got the dancefloor jumping, they’ll be loving you. Get the right song on the decks and you can expect random kisses, free drugs and drinks – and there’s always the prospect of being bribed to play certain tunes.

4. Promoter. You’re giving people a great time, so you can usually expect to feel a bit of love, and perhaps foxy advances from artists desperate for a place on the bill.

5. Doorstaff. You have the power to let people in on the guestlist, and if the club’s crap people will invariably start talking to you.

6. Barstaff. You’re serving up the pints so you deserve the respect of the masses. People have to talk to you, so there’s lots of chances to strike up conversations.

7. Inside security. Wielding the power of instant ejection over drunken fools – and the potential to be the hero when a fight breaks out – security staff working inside a club can sometimes enjoy handshakes or amorous advances from appreciative punters.

8. Table clearer/glass washer. You’re an important cog in the wheel of good times, and after a few beers, people might just appreciate that.

9. Flyer monkeys. You might be out in the street but there’s always a suggestion that you might actually be directly involved in the club and thus be a bit cool. And  it’s a great way to meet people if you’re chatty.

11. Soundman. Yep, you really are at the bottom of the pile, registering with the masses as a lowly artisan tasked with fiddling about with sliders in the background – or being shouted at when some drunken buffoon decides that the bass guitar needs to be lifted higher than the entire band with oceans of Phil Spector-like reverb added to the entire mix.

And when the guitarist decides to turn up his amp to continent-dividing levels, or leave the stage with his guitar feeding back at maximum volume, who do the crowd look at, accusingly? Why, it’s the soundman of course!

Despite sound engineering being a skilled job, it’s possible that these regular incursions into a world where no-one appreciates their worth is what turns some soundmen/women into grumpy, lost souls, forever more interested in fiddling with compressor thresholds than engaging with the audience. But they get my love – and if you can, be sure thank the soundman after seeing a great gig. They’d almost always appreciate it.

Chat about this on the forums.

A night at the Water Rats, Kings Cross – loads of bands, but not a love of love

Amycanbe – one of our very fave indiepop bands!

3 Comments on “From bands to DJs to soundmen: The Hierarchy Of Cool At A Gig”