The legend of the London Stone has attracted tourists from all over the world, most of who we’d imagine must be a little disappointed when they get to see the thing. 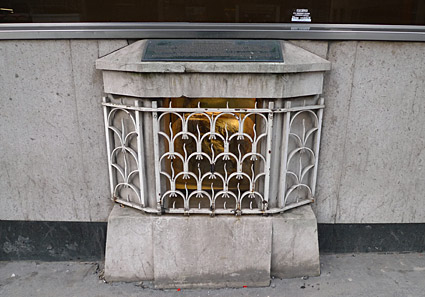 Said to be the spot from which the Romans measured all distances in Britannia, the London Stone can be found shoved into the side of a disused sports shop on Cannon Street, in the City of London.

Set within a carved stone surround and decorative iron grill (a Grade II listed structure), the London Stone has played a big part in London’s history, being recognised as the symbolic authority and heart of the City of London for hundreds of years. 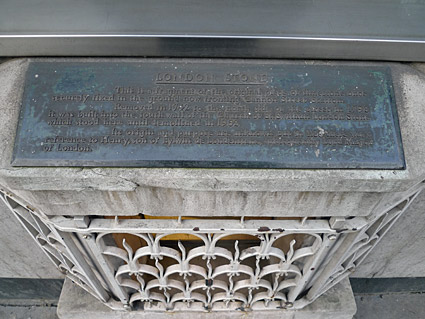 For centuries, the Stone was the place to be if you were in the mood to forge deals, swear a few oaths or make an official proclamation or two.

Jack Cade, leader of the 1450 revolt against Henry VI, followed tradition by banging his sword against the Stone after his forces entered London, declaring himself the ‘Lord of the City’ straight after.

Queen Elizabeth I’s adviser and occultist, John Dee, went ever further, believing that it had magic powers, while William Blake reckoned that the stone had been part of a druid altar. 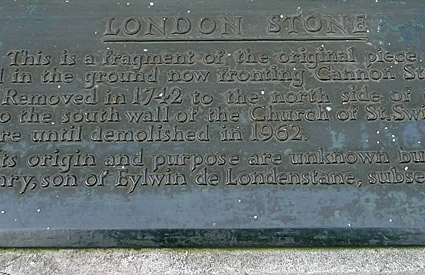 The Stone is now somewhat diminished in size – it’s barely more than a shapeless lump of stone, to be honest – and was originally sited in the middle of Cannon Street.

Before that it was set into the wall of St Swithin’s Church, managing to survive the church’s bombing in the Second World War intact. 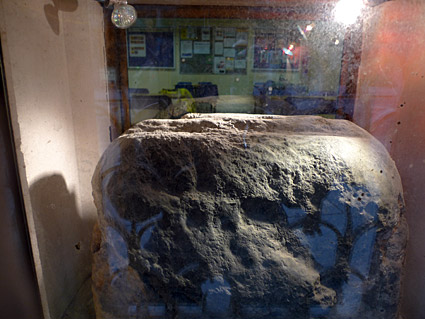 According to folklore, London’s safety is linked to the Stone, with a myth saying that the stone was part of an altar built by Brutus of Troy, the legendary founder of London: “So long as the stone of Brutus is safe, so long shall London flourish”.

With the store that houses the stone due to be demolished, the Stone will make its final journey to the London Museum.

London signs and notices – photos from the city