The request was met by such head scratching that posters began to fear that he’d dreamt the entire thing up because no one seemed to recall the bridge existing.

Despite the lack of forthcoming photographic proof, Paulie continued to describe the old bridge:

The bridge was pretty much on top of the pedestrian crossing which was always there (and which most people opted for). I think it survived until the mid 70s. It was a girder monstrosity with big planks laid across for the steps and bridge span – they flexed a fair bit when a bus went underneath.

To give a more accurate placing – it ran between Tunstall Road and the tube with the stairs at right angles on the south side. 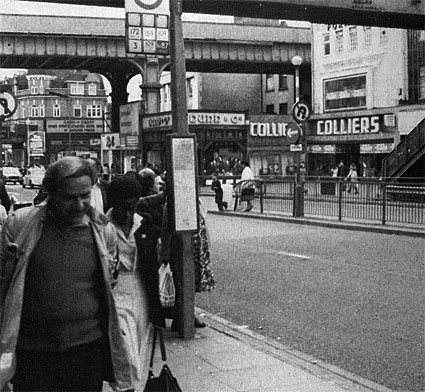 Happily, the poster ‘haushoch’ came to the rescue, unearthing a photo showing a section of the footbridge from ‘London Anders Reisen’ published in 1980 by Rowohlt Taschenbuch Verlag GmBH.

The photo was by Michael Kadereit, and the books were guides for tourists who didn’t want to visit the typical tourist spots, but wanted a real insight into the place they were visiting.

More: The Mystery of the Brixton Road footbridge