If anyone thought that Glastonbury was bad this year, check out the living hell that was Yorkshire Folk and Blues festival at Krumlin, 1970. “The Krumlin Festival has the unfortunate reputation of being on the receiving end of the worst weather to ever hit a British rock festival, which more or less devastated the festival site, leaving only the stage standing by Sunday morning.”

“The final assessment of the festival on Monday morning showed it to be an unmitigated disaster . The whole weekend awash with water , one death from exposure and one freaked out organiser last seen by the other promoters wandering away from the site on Sunday. He wasn’t found until Thursday , when the police picked him up, suffering from hunger and exposure , wandering around somewhere on the moors.”

“By Sunday evening there were sixty cases of exposure and some people had been injured when a marquee blew down on them after they’d been huddled inside for warmth. The death occurred when a man tried to get under a plastic bag for protection”

“It was the worst organized festival ever. It was a piece of moorland. About 25,000 kids turned up, but the weather turned almost immediately from a mild grey to rain., hail, sleet and rain , blue rain and thunderstorms. This went on for the entirety of the festival so there was this incredibly damp and miserable audience in the downpour in this rather cold and bleak up-land where trees don’t grow.”

There’s also some incredible photos from Glastonbury 1971 at this site. 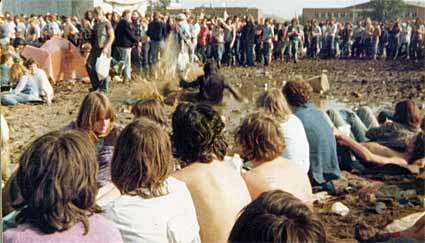 And while I’m reminiscing about old festivals full of mud and rain, check out this woeful tale from my first ever festival, Reading, 1975

Brixton battered by winter storms of rain and sleet