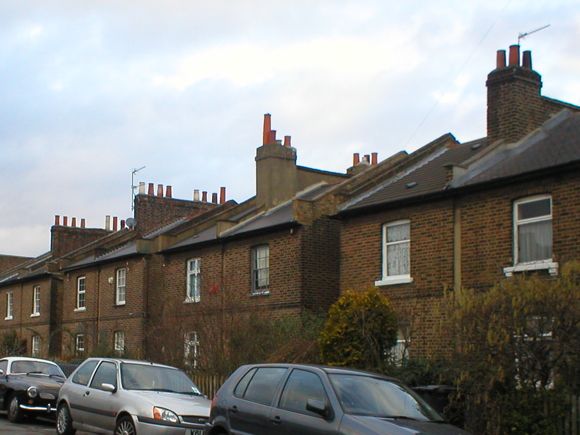 Brixton’s not all about the bustling market, a vibrant night economy, gigs, riots, drugs and all the other stuff that gets trotted out in the media – there’s also quieter side to the place.

Long term local resident IanW has cast his eye on one of the quieter aspects of Brixton town, Archbishop’s Place, SW2, a small cul de sac near the top of Brixton Hill. Here’s his report:

Generally regarded to be the prettiest street in Brixton (narrowly seeing off Josephine Avenue and Holmewood Gardens for the title), Archbishop’s Place is a secluded cul-de-sac tucked away behind the historic Tudor Close at the top of Brixton Hill.

Approaching the street along Somers Road, from Brixton Hill, you could be anywhere in SW2 – there’s a short row of nondescript houses on Somers Road, the side of Tudor Close (former home to Nick Cave, amongst others) to your left and a small industrial estate to your right (mostly warehouses for an Italian food company).

But as soon as you turn off Somers Road into Archbishop’s Place, you could be in a different town and a different century altogether.

Built in the early 1850s, the street consists of a string of Victorian semi-detached houses with country cottage-style front gardens, which were built for the staff of a mansion called The Elms which stood on Elm Park.

As traffic rarely ventures into Archbishop’s Place, the atmosphere in the street is a far cry from the “edgy, vibrant” stereotype of inner city Brixton. Water features tinkle softly in the front gardens.

Children play in the street. Adjectives such as “leafy” and “quiet” spring to mind rather than “lively” and “cutting-edge”. Indeed, the loudest disturbance you’re likely to encounter on Archbishop’s Place will be a resident blaring out Radio 4 at all hours of the afternoon. 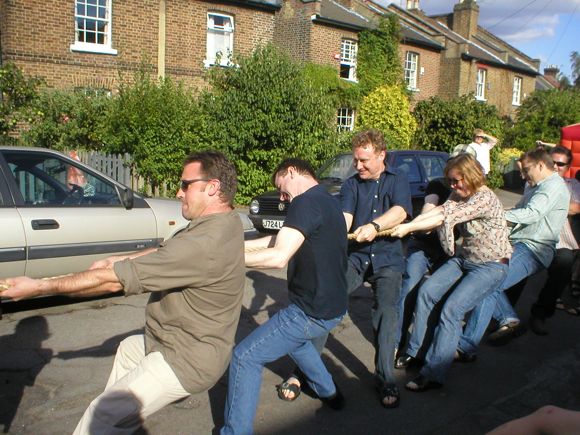 Cool Brixton, this is not, then. But Archbishop’s Place’s laid back, slightly bohemian atmosphere has proved to be a hit with actors and comedians. Gregor Fisher (AKA Rab C Nesbitt) lived in the street for a few years (adding a conservatory to his cottage while he was there), before selling to comic Helen Lederer.

“I lived in a cottage that I bought from Rab C Nesbitt,” she told The Independent in 2006. “I lived there for 10 years, first as a single girl, then with my first husband, then, after we split up, with our daughter.” Broadcaster Paul Ross, brother of Jonathan, also lived in the street. 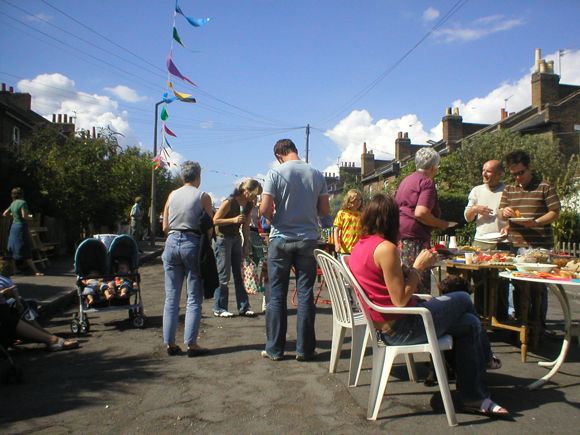 Nowadays, the best time to visit Archbishop’s Place is undoubtedly during its annual street party, held on a Saturday in August. Cars are cleared from the street during the day and the street closed to traffic, and residents set up trestle tables and a bouncy castle and enjoy a day of (usually sunny) festivities.

One year the Archbishop’s populace took part in an all-street tug of war (even numbered houses verses odd numbered houses), while on another a fire engine was parked in the street for children to clamber over.

In all, life in the street is often closer to country living than the hustle and bustle of the Big Smoke. Archbishop’s Place may not have the cool cachet of central Brixton, but its friendly, community spirit, and quietly eccentric atmosphere make it one of the most distinctive and much-loved streets in the area.

See it on Google Maps

[Article and photos by IanW]